Trending
The Journey so far…

It was time now to move towards the Sattal Lake, with which we planned to cover other lakes of Kumaon too including Bhimtal, Naukuchiyatal, Nainital However, it was Sattal being most peaceful among all, we had planned to stay overnight at KMVN there only.

An early morning at Sattal 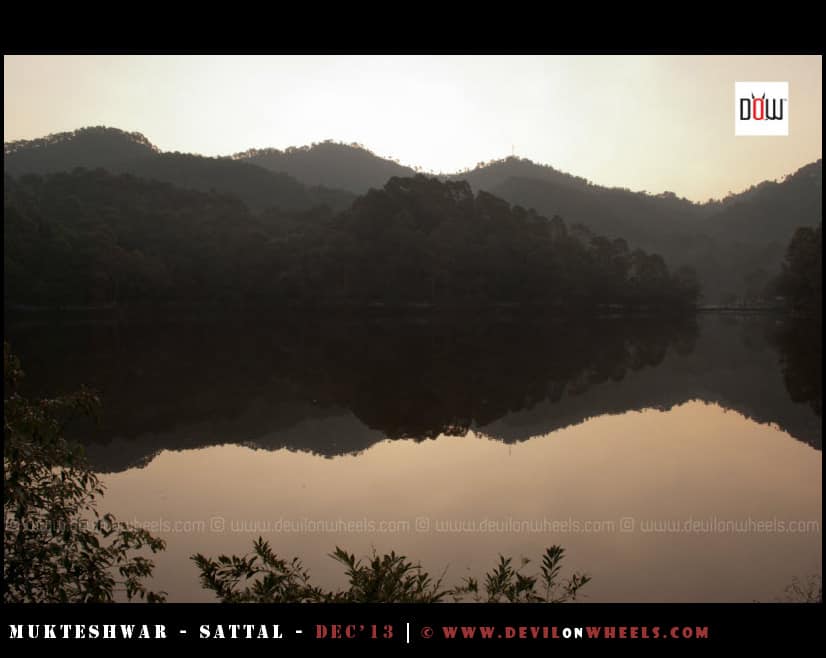 We started the drive back and it took about 2 Hrs from Mukteshwar to reach there. Sattal is about 13 KMs from Bhowali and 25 odd KMs from Nainital. As we entered the road of Sattal, well there was complete silence around with only sounds of birds chirping as background music and the lake was as calm & still as it can get… It was almost like time has come to a standstill !!

A Little About Sattal

Sattal (seven lakes) is a fresh water lake and as the name suggest consist of a cluster of 7 interconnected lakes around it viz. Purna Tal, Sita Tal, Ram Tal, Laxman Tal, Panna or Garud Tal, Sukha Tal or Khurdariya Tal and Nal-Damyanti Tal. It is located at an altitude of 1370 Mtrs with Oak & Pine Forests around. You can spot a lot of migratory birds too up here at Sattal and people do come for birding too. 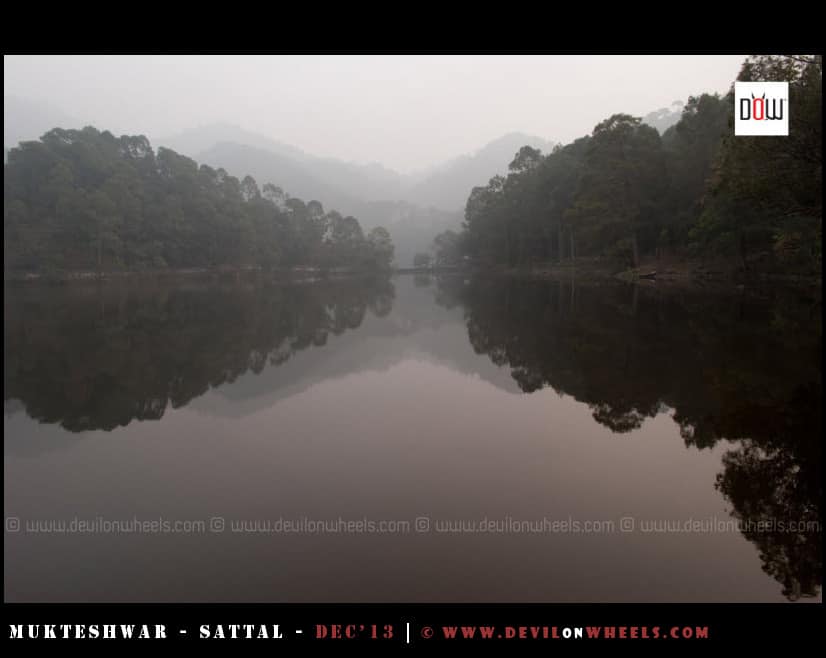 The calmness at the road aside Sattal 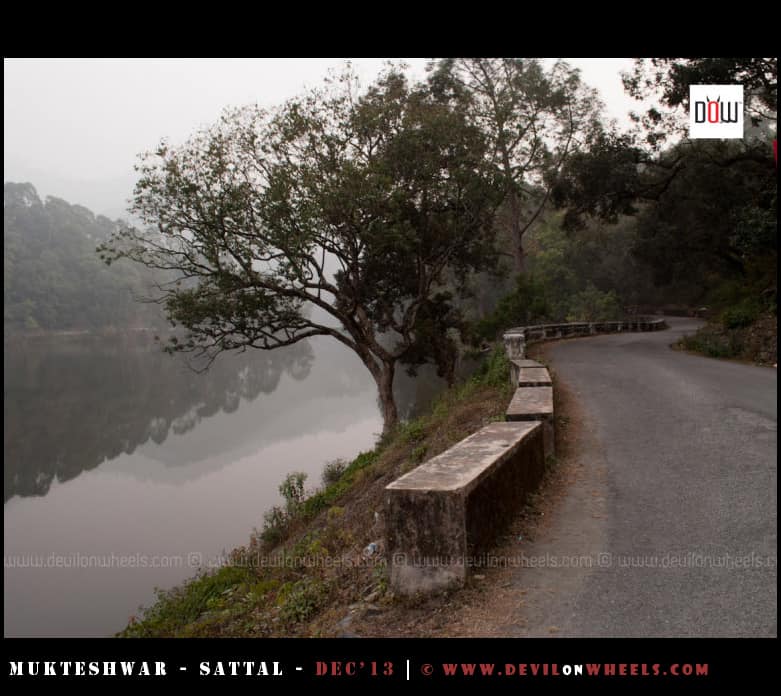 Coming back to story, we went to KMVN Rest House of Sattal and found it equally deserted by the noises despite being right on the road. Monkeys were around the lake and on trees and junior was happy to spot them 🙂 … Overall, a complete peace within and around. We immediately ordered some French fries which were quite delicious, I must say, may be it was hunger that was talking my senses 😉 … We asked them to cook whatever he had… We were the only guest there and we took couple of rooms on the front row and did not took the cottages which were costly and one of them did not have a working washroom 😯 …

Rooms were quite fine and OK to stay though service in general is what you expect from a tourism guest house. Meanwhile, one more family had checked-in too and they were from Kashipur. Neeraj and that guy was having discussions in general and what is happening in Uttarakhand and all in which he told that there is a Bankhandi Aashram up there on a trek of about an hour or so. It is also known by the name of Aloo Baba where he seeds various vansapatis and herbs plus promote them too. It felt enticing, so we decided to join him in the morning while my wife and brother in law opted out for a belated sleep. We took rest for sometime and then dinner was ready, which was nice in taste. 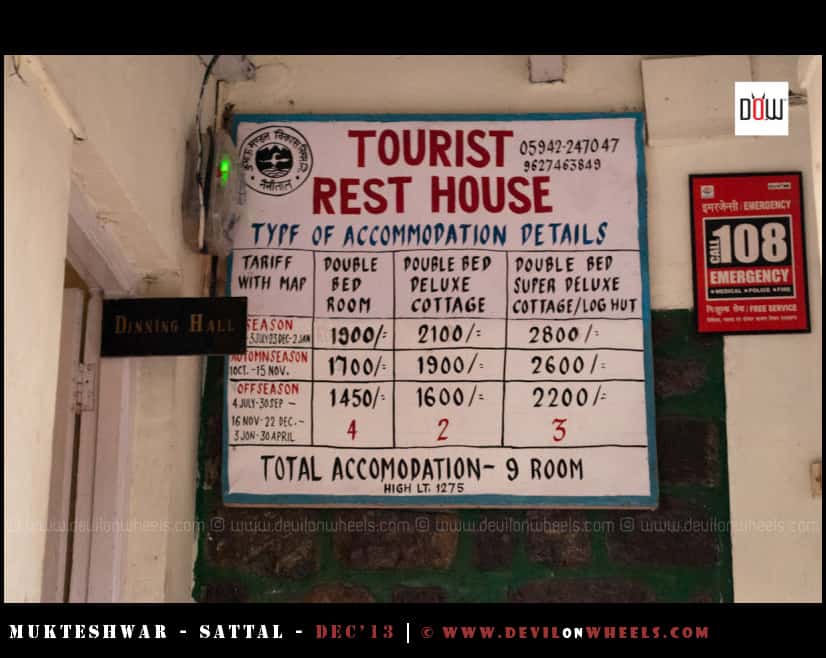 At 6 AM, I was out and ready to trek to Bankhandi Aashram and somehow we found the trail going up after couple of wrong trails but as we started the climb, it proved quite moderate level and sometimes had steep gradient too. The other family had a kid who was winning the race, I was as usual gasping for breath, Neeraj took it easy as he had her daughter too and both ladies helped themselves slowly towards the top. We kept carrying the little angel in turns but Vankhandi Aashram did not come by even after 1 Hr 😀 😀 … It was almost about a good 2.5 Hrs it took to reach the top of the hill and the Aashram. As usual, we were greeted with Aaloo Jeera and Babaji is said to have been blessed with powers that they can serve as many people as can come on a given time with aaloos without getting the stock over 😯 😯

What a road for a morning walk Some more glimpses of Sattal 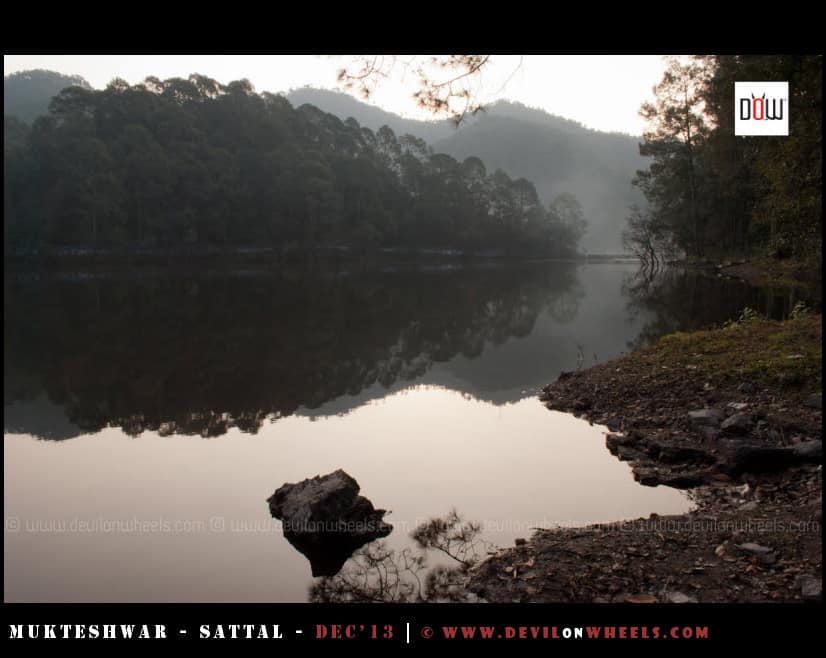 Views from the trek to Vankhandi Aashram at Sattal 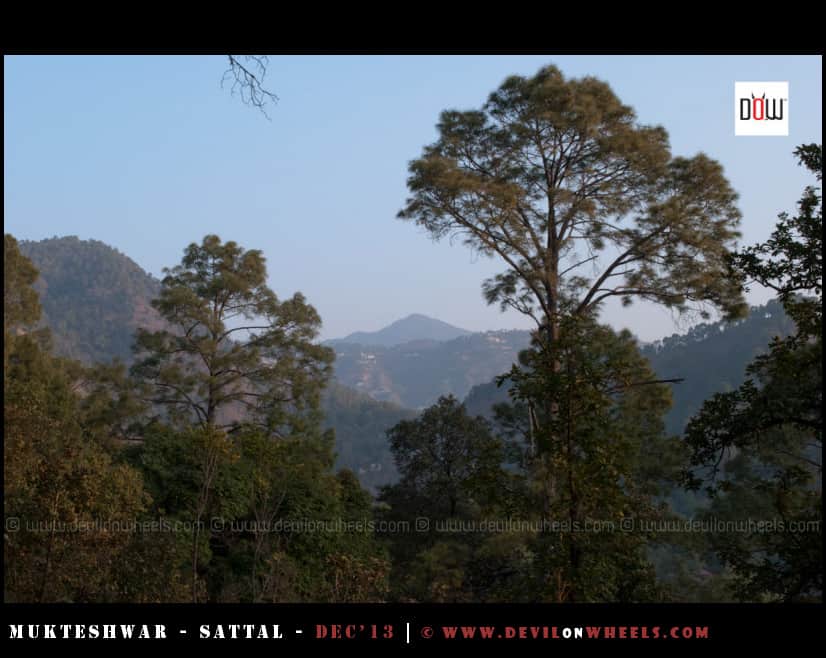 Flora on the trek to Vankhandi Aashram Anyways after that strenuous trek up there, the aaloos and banana given as prasad looked heavenly. For the ones interested in hiking, it is a nice, short trek though. Babaji had planted 100s of vanaspatis & herbs up there and even GOVT. has appreciated the efforts. There is whole new field of Gyaan babaji had about them and I was amazed to see the knowledge and care he had for mountains around with the importance of planting these vanaspatis & herbs rather than regular popular, oak, pine, etc.. who tend to soak water more from the ground. Anyways, it was quite an amount of time we had spent and now it was time to go back. I carried the little angel with me this time so that Neeraj can take care of Shikha (his wife) and descend down. I made a sprint almost and reached at the base non-stop within 35-40 minutes, rushed to the KMVN and entered to bath right away… It was quite a feeling to be back there as I almost jumped up on the breakfast and ate like I haven’t ate for ages 😀 😀 … Seems a lot of energy had been lost in the trek.

The Seven Steps of Devotion The Seven Steps of Devotion – A Closer Look That’s Aaloo Jeera for you as prasad Dog and a cat, having food together Monkeys at the Aashram Temple at the Aashram After a while, we all were ready to move to see Bhimtal, Naukuchiyatal and finally move to stay at Nainital. Bhimtal was just about 12 odd KMs so we reached there in no time but it had a feeling of too commercial so we just moved up to Naukuchiyatal which is just 5 KMs from Bhimtal. There we went for boating and my son really enjoyed it as it was his second time but for the first time he was actually feeling the water and playing with it as we enjoyed boating for good hour or so. After that he saw a horse and was almost up for the ride while my wife, Neeraj’s angel & his wife took some pictures in traditional dresses and of course this is the enjoyment of family trips 😉 😉 … Its quite unusual one for an adventure traveler like me but equally important to make your loved ones happy and cherish the smiles on those faces too 🙂 🙂 … Another view of Sattal Bhimtal, as captured on the go We got free by 4 PM and were wondering to go to Nainital about 26 KMs away. Then, we decided let’s head back home as there is nothing but yet another lake there at Nainital and have been there around so many times. Somehow, we convinced Neeraj too and we were all set for mad drive back to home. While exiting from Naukuchiyatal – Bhimtal to Kathgodam, we realized that we missed this shortcut and took that long route while going to Mukteshwar that would have surely saved about 40-45 minutes on Day 1 for us. Never mind, it was a learning for future. We all were hungry and hence, I stopped aside at Udipi at Kathgodam for some South Indian food. We had it to the core as we knew now it will be a non stop run back home. The taste was not that great so did not over-ate :D… Then, it was nothing but a mad run back home as we all reached by midnight back to our homes and saved one day of leaves to spend more time at home with family 🙂 🙂

I hope you liked this short little family trip of mine. Soon, I will start sharing an amazing frozen white Spiti Valley adventure from March 2014 !!