It was quite a fun spending the time at Kyon Tso 2 Lake (Chiling Tso lake) and I feel it was the find of the trip for me, loved it by heart. But, time was running and we had to make a move on towards Nidar and Yaye Tso ahead of Thitzarbo La Pass. 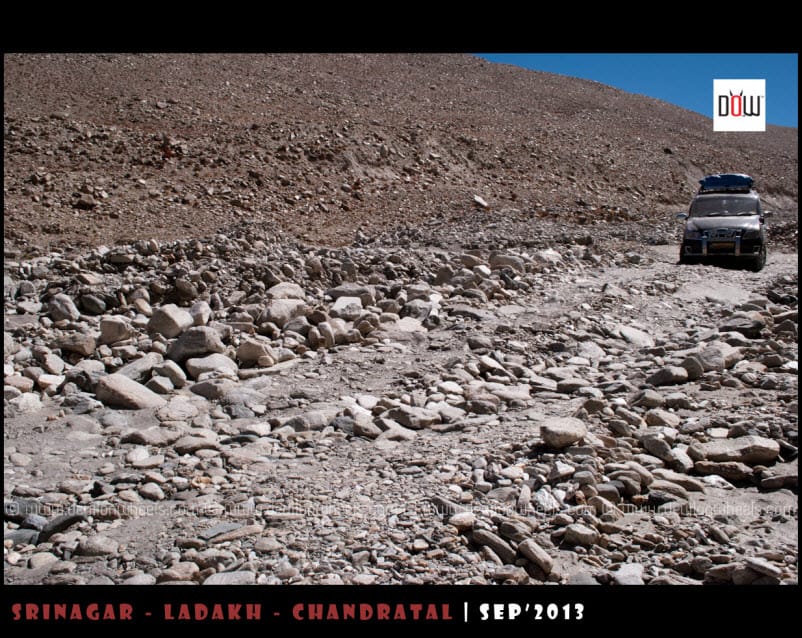 As we ascended towards the pass, we encountered plenty of marmots around. These marmots were a bit different in the sense that they were very shy of humans 😉 … Hardly anyone could click even a distant picture as they disappeared immediately into their holes ;)… Nevertheless, very soon we reached the top of Thitzarbo La, our 9th high mountain pass of the trip, at an altitude of 5213 Mtrs Kyon Tso 2 lake could be seen just marginally in the distance. It was very windy up there at the top but views were dramatically different on both sides of the pass. As we descended, the road was much smooth for a while into the Nidar region though still a dirt track. The dream soon ended as we had to cross an extremely tricky section which was almost on some water stream as it appeared. Rigzin marginally managed it with elegance but not without brushing the underbelly of Scorpio. Xylo too brushed a bit. No damage done though and then it was just the usual dirt and pebbled track. 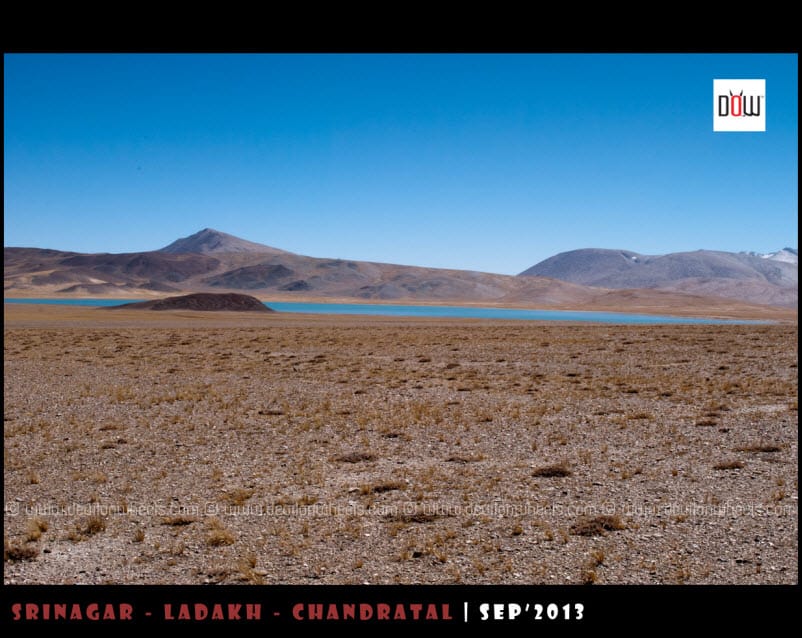 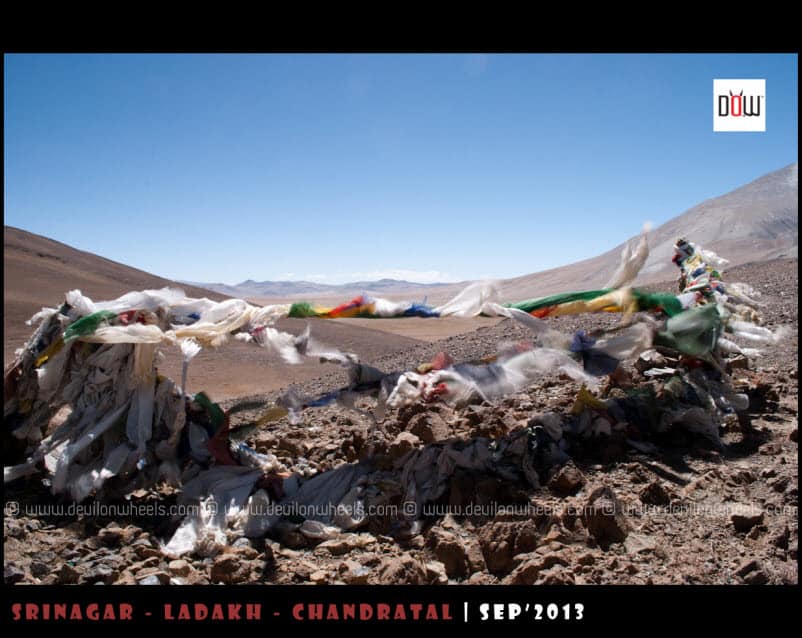 Views from Thitzarbo La … Nidar Side 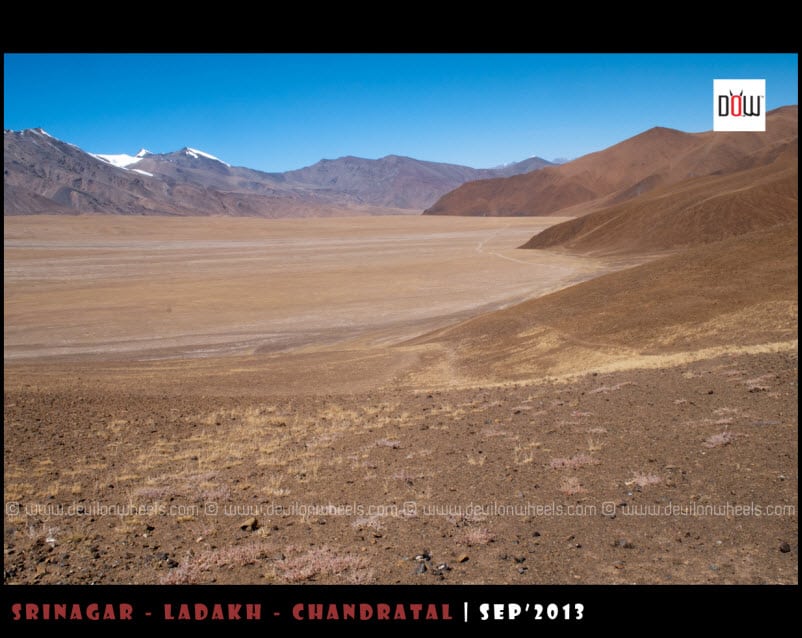 As we start to descend from Thitzarbo La in Nidar The Rocky Roads of Nidar Region 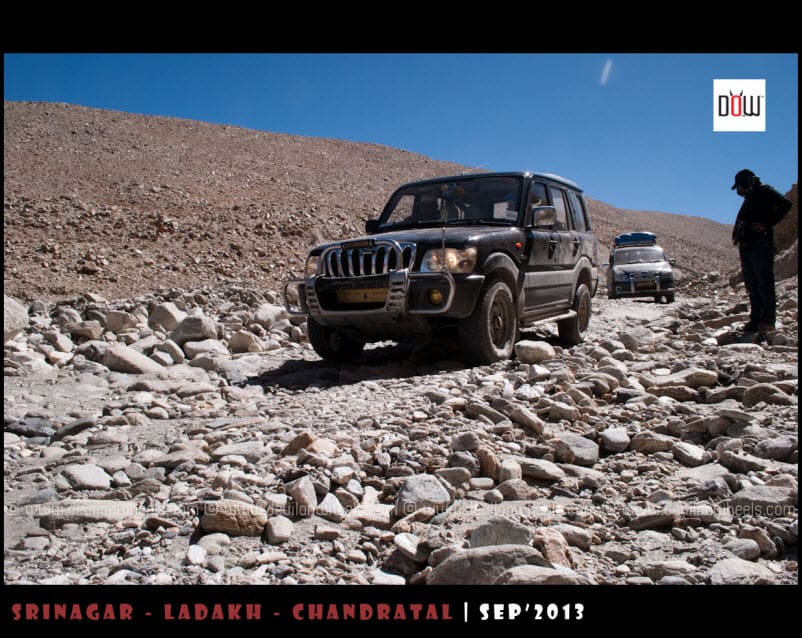 Work was going on for construction of tarred roads and hope things will improve in time to come in this region too. Soon, we just ran through a big heard of Kiangs who just kept running away and away from us. Being in that very region, it was almost like a kind of feeling in the middle of an abandoned mother nature, hardly traversed or any signs of humans. The multi-coloured mountains, the soothing sound of water stream flowing besides and the views of wide valley in the front of eyes were just inspiring to call me every other day :)… After hours of wandering since morning, we landed up into the first village and met humans, finally. They could hardly believe we arrived there as I have never heard someone doing this route except one. We were more surprised that there was a primary school of small children up there and without any second thought we turned our cars for DoW Cause | GYAAN 500 You can read the entire experience we had spreading those smiles up there in Nidar region at the DoW Community link: DoW Cause | GYAAN 500 in action at Nidar – Nyoma, Ladakh 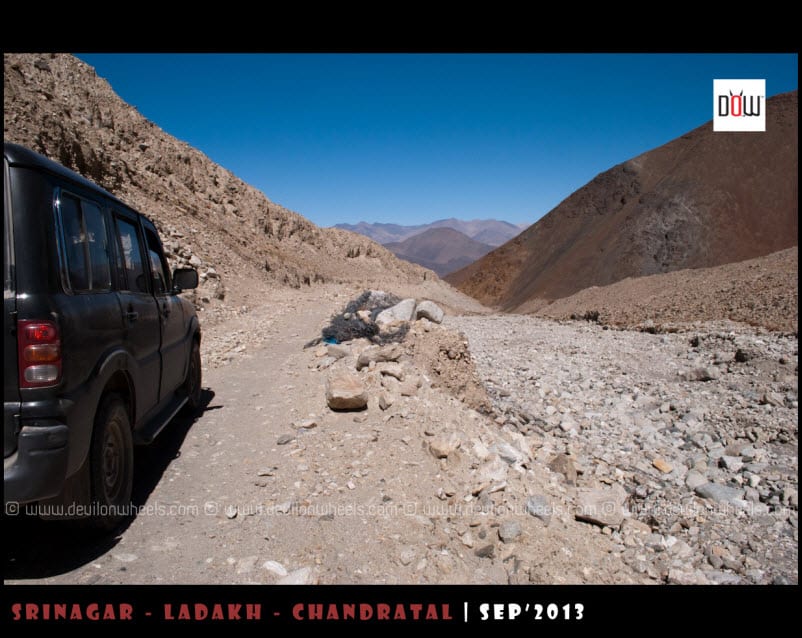 A Gateway in Heaven A beautiful valley in Nidar 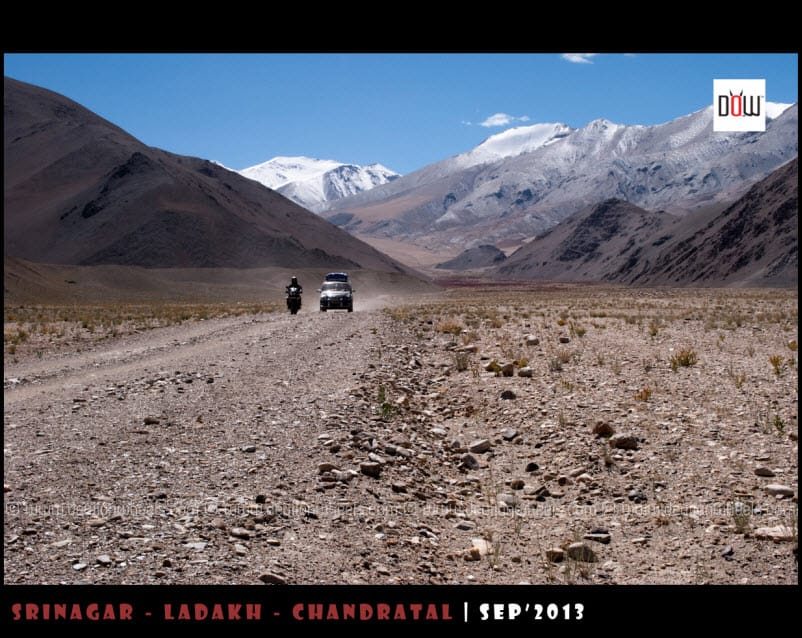 Running In To The Wild…

As the road improves 🙂 Approaching a village in Nidar region 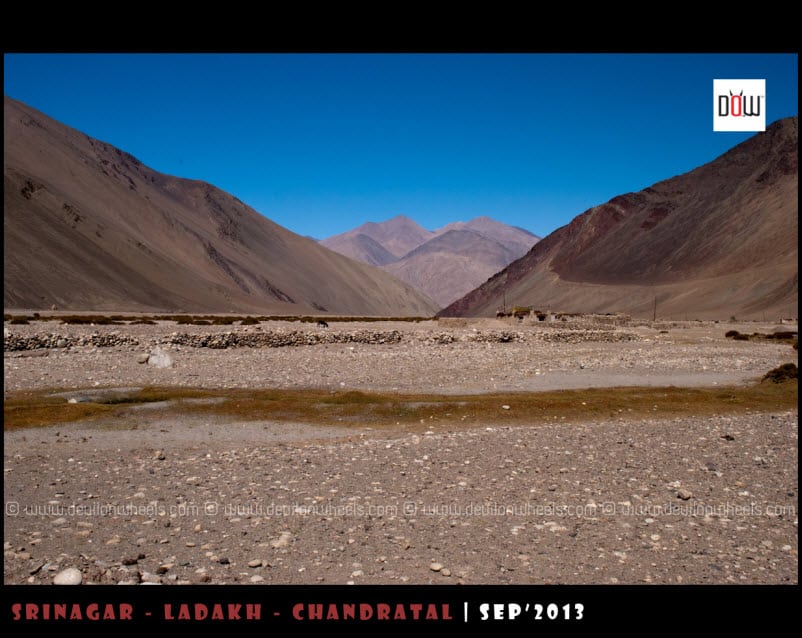 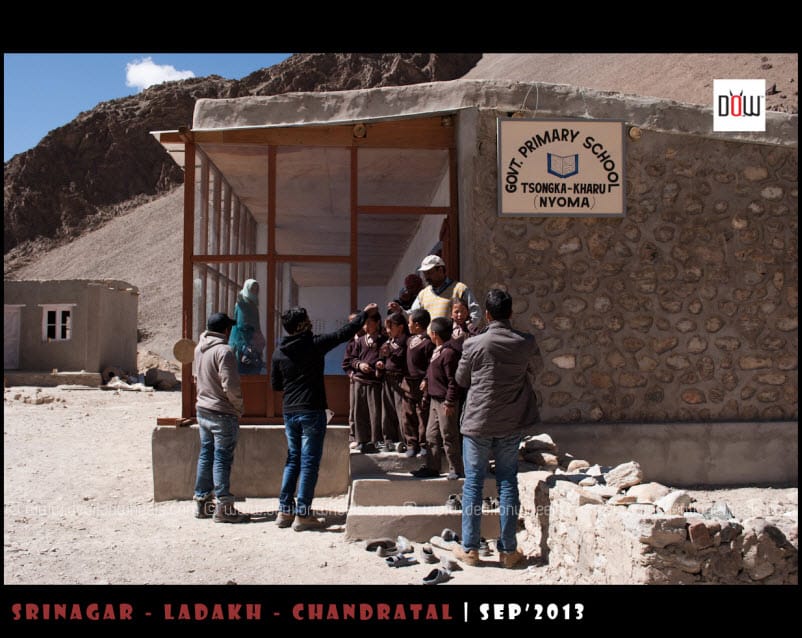 After spreading the smiles around the village with our DoW Causes, we resumed back the journey. Even Rigzin said, “Sirji, aisa pehli baar maaza aa raha hai (first time I am enjoying like it)” … These are just the small wishes and praises that we actually earn in life, money is just too materialistic in front of such words and smiles. Hence, when you travel, travel responsibly and participate in something like DoW Causes. Anyways, coming back to journey, it was just a smooth sailing after a while as the tarred roads have appeared and we finally reached the junction of Mahe – Nyoma road passing a bigger village, named Nidar Nyoma was clearly visible on the right side from the road we were coming from Nidar but we had to take left towards Mahe. Within no time we reached Mahe and started our ascend to Horala Pass to witness Yaye Tso Lake

Finally, the tarred roads welcome us Horala Pass is about 20 KMs from Mahe as a detour but there are long serpentine. Since, the ascend was not that steep, so, we decided to take the shortcuts of rough roads. In one of the potholes Rigzin felt something unusual in the car, some noise was coming while we bump in potholes. It made us crazy as there was no help around. Instead of risking more damage, we decided to open it up and check thoroughly and then a 😯 😯 😯

The Shortcuts to Yaye Tso Lake The shocker spring had broken and that happened while crossing the river bed before the lakes and since then we just ignored this noise. After thinking a lot, we pulled out some ropes and tied it brutally to help us pass through the day. We kept our speed slow and went on to road which was paved so as to have less bumps. After a cautious drive, we reached the top of Nurpa La or Thato La at an altitude of 4815 Mtrs Nurpa La or Thato La, was the 10th Pass of our trip and from this pass you can get the first view of Yaye Tso Lake I confused Nurpa La with Horala which was further away from it and from where Yaye Tso is completely visible. However, we did not force the issue with Rigzin as he was already upset and worried with the broken shocker… So, we missed Horala by couple of KMs else would have been 18 passes in the trip 😉

Yaye Tso is a heart shaped, volcanic lake at an altitude of 4988 Mtrs and was the 8th lake we saw on the trip so far… Hiking few hundred Mtrs at 4800+ Mtrs just to get a glimpse of the lake, again is not an easy task for someone unfit like me. In distance, you can see the route to Yaye Village somewhere near Horala Pass, from where one can approach the shores of Yaye Tso lake. We were short on time, so we clicked few pictures after climbing a vantage point on a near by hill. The funny thing was I did climb that hill far away but when looked back for return, it was damn scary being slippery and straight gorge on the side below 😯 … Very very slowly and heart in the mouth I managed to get down from that hill and went back to car. Here as well, it was quite windy and cold up there at the pass so we just got back into the car and Rigzin started driving it back, slowly. Nurpa La or Thato La at an altitude of 4815 Mtrs 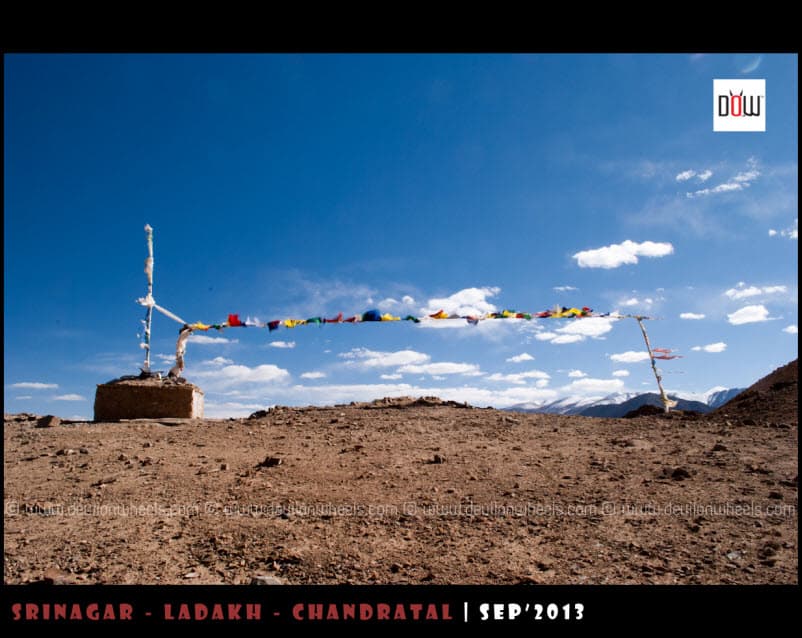 On the way back, we saw the Yaye Nunnery too but since we did not have time on hand being slow on speed, so carried for Mahe. In couple of hours of drive alongside Indus River, we reached Chumathang passing aside Mahe bridge and settled for the night at Hot Springs Resort at Chumathang (you can read the review here). We did not have food in the noon so all of us were super hungry, hence ordered some snacks and food in first place. We took one room with attached bathroom and two without as other rooms were already booked. We were offered the bed for Rs 100 odd and food was also cheap there, so overall a steal of a deal.

A view of Yaye Nunnery near Yaye Tso After 3 odd days, finally I was able to make a call at home because BSNL works at Chumathang Family was happy to hear the voice after three days of no whereabouts and same was the feeling inside me. We then made a call to Gagan who was in Leh and was supposed to meet us at Tso Moriri next day. Rigzin asked one of his friends to buy the shocker spring and hand it over to Gagan so that it can be replaced on the way to Manali – Leh Highway. We had almost decided to go back to Leh with Rigzin and drop Tso Moriri but thanks to Gagan as he agreed to take that spring along him to us, next day. We had a sigh of relief and we crashed into beds after a heavy dinner for a good night sleep.

This ended our eventful run in Nidar region of Changthang – Ladakh on Day 7 of this DoW Mega Meet and of course find of the day was Kyon Tso 2 lake :)… Have you ever experienced a mechanical failure in the middle of nowhere? Would you like to try to traverse this amazing route on your next trip to Ladakh? I will love to hear from you back here…