We woke up early morning as we had to traverse the Kunzum Pass to Gramphu route on this last day of the trip for most of us. I was already nuts thinking about the struggle we have to go through again in the car that did not have a torsion rod 😀 😀 … It is surely going to be a challenge to travel through Batal – Chota Dhara road which is nothing but a river bed. However, we first need to go through Kunzum Pass to Batal.

The Road to Manali from Rohtang Pass 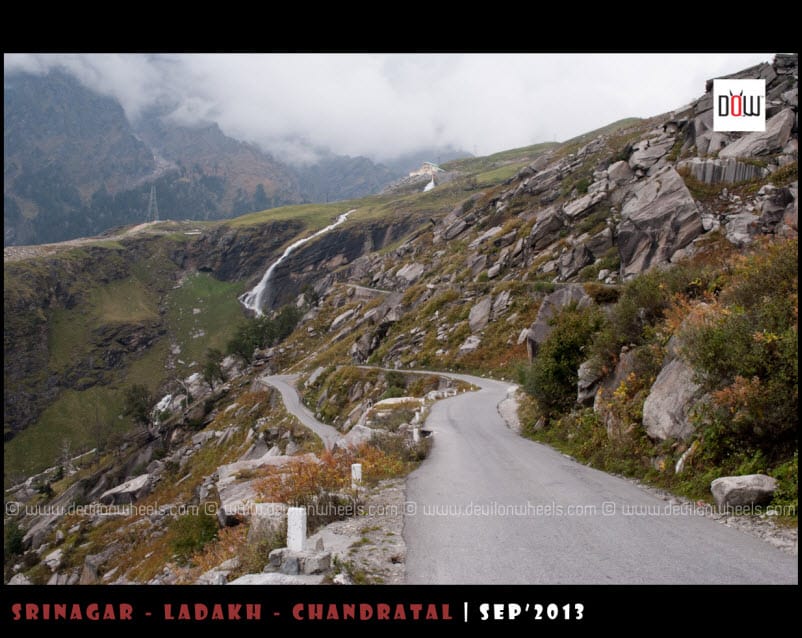 We planned to have breakfast at Chandra Dhabha, Batal with Dorje Uncle and hence, left Losar by 7 AM in the morning. It was quite cold as we begun the bumpy drive back to Manali over Kunzum Pass from Losar. Soon our heads started to bang with each other and we were fully awake, holding on to each set of handle we could 😉 … Finally, the driver spoke that he was able to connect with his taxi owner and has asked him to come over with mechanic from Keylong 😀 😀 … Wow !! what a good news and in fact the signal at Losar were only available for 10 minutes as we reached and vanished but we were so happy to listen that he was able to get through in those 10 minutes only 🙂 🙂 … Nevertheless, it will take some really good time for the taxi owner to reach and get the torsion rod replaced and hence, we decided to prolong our breakfast at Batal.

Soon we reached Kunzum Pass, clicked few pictures and it was damn cold. Many of us had decided to head to home from the latest Volvo on this day itself including me and hence, we did not took the de-tour again to Chandratal to see the magical reflections of this moon lake. Of course, the bumpy ride was another reason to it. We reached Batal and Dorje Uncle was all up and ready preparing paranthas and stuff. We handed over the remaining medicines to him by writing the names and usage of them with a marker. This might help someone in need who may be traveling over this route. He was happy to see our efforts of DoW Causes and such gestures. But, more or less they were quite tiny in front of his brave service he has been offering to this region and helping numerous tourists in need every other season. Kudos !!

An early morning at Kunzum Pass 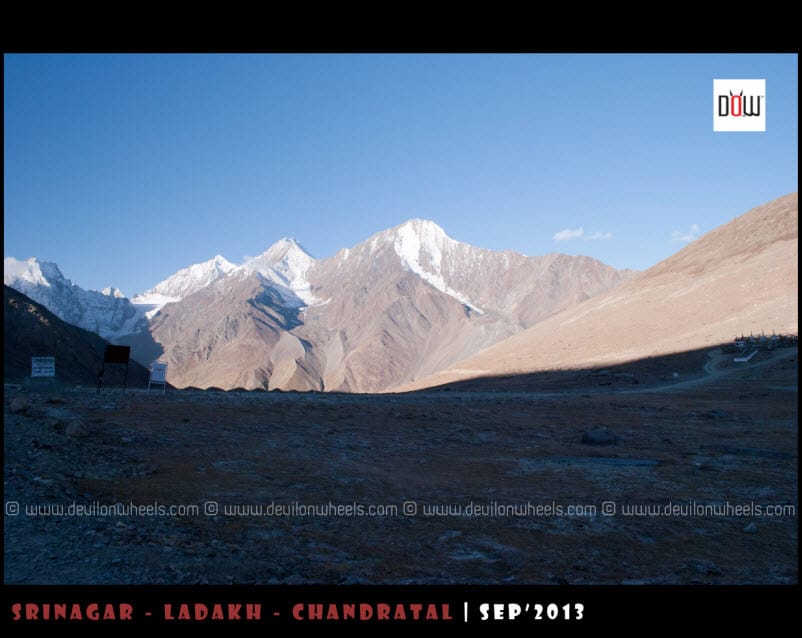 After a tummy filled breakfast, we resumed our journey towards Chota Dhara – Chatru and believe me, every rock coming below the tyres were just throwing us up, almost hitting the head on top of the car. It was such a struggle and there were no signs of owner or mechanic coming on the way. There went few water crossings and finally when we were nearing Chatru, we got to see a Gypsy coming our way and driver shouted that "Saab aagaye !!" and we asked him just to stop and let him come, no more bumps our body can take 😉 😀

This begun a stoppage of an hour almost as the mechanic replaced the torsion rod and driver’s Saab was contemplating that how come he broke this very rod again and again as we all joked together 😀 😀 … We asked him to get it surveyed his driving skills with Chevrolet, he he he 😉 😉 … Anyways, thanks to the guy who came all the way from Keylong just to get this torsion rod done for us. We thanked him, resumed the journey to Chatru – Gramphu in some good speed now and better comfort, of course. The struggle had eased out and there were less bumps. We crossed Chatru in no time and at Dorni Nalla we met couple of young adventure enthusiasts with all white faces as the boy asked "Sir, Chandratal kitna door hai?? (How far is Chandratal??)" … Looking at their white faces, I reluctantly told "Bhai, abhi to door hai, about 50+ KMs!! (It is a bit far bro, about 50 odd KMs)" … They looked more nervous and again asked "Aise road par paani aur hai?? (Are there more water crossings?)" and again I replied "Bhai, abhi shuruat hai 😀 😀 (It’s just a start bro)"… And he did not believe, replied "Aap Jhooth bol rahe hoo (You are lying to me)" 😀 😆 😆 … I said OK, have fun then 😉 😀 !!

As we said good bye to Spiti Valley 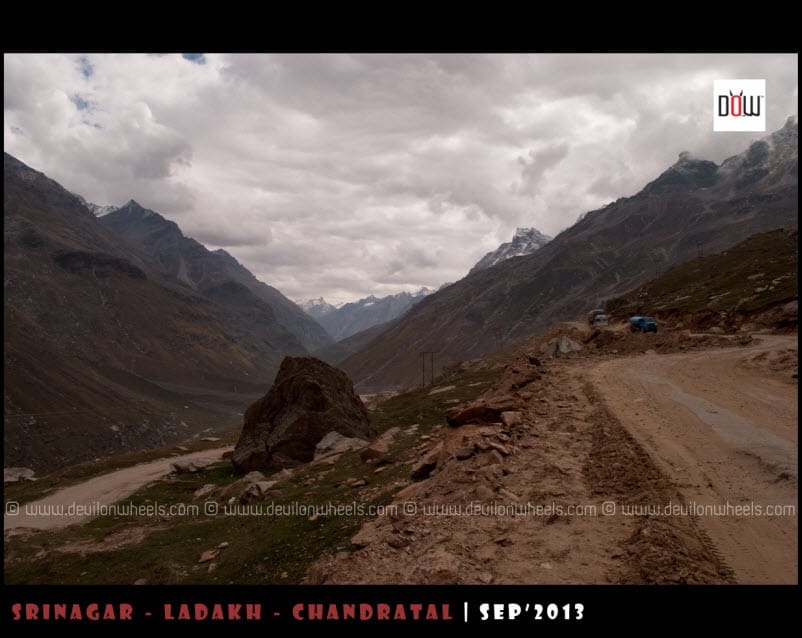 Actually, the main bad stretch starts after Chatru only with water crossings and almost river bed type roads. Till Chatru from Gramphu, the roads are still manageable. Anyways, we soon reached Gramphu where signals were restored and I immediately called home to report that I am coming tonight only. They all were excited and we moved after having a cup of tea each at Gramphu dhabha. The roads from Gramphu to Rohtang Pass were in good shape, unlike season time. This made our progress faster and the taxi guy was in full mood now as it seemed a familiar road to him unlike Spiti roads 😉 😉 … He was cruising and within no time we were at the top of Rohtang Pass. 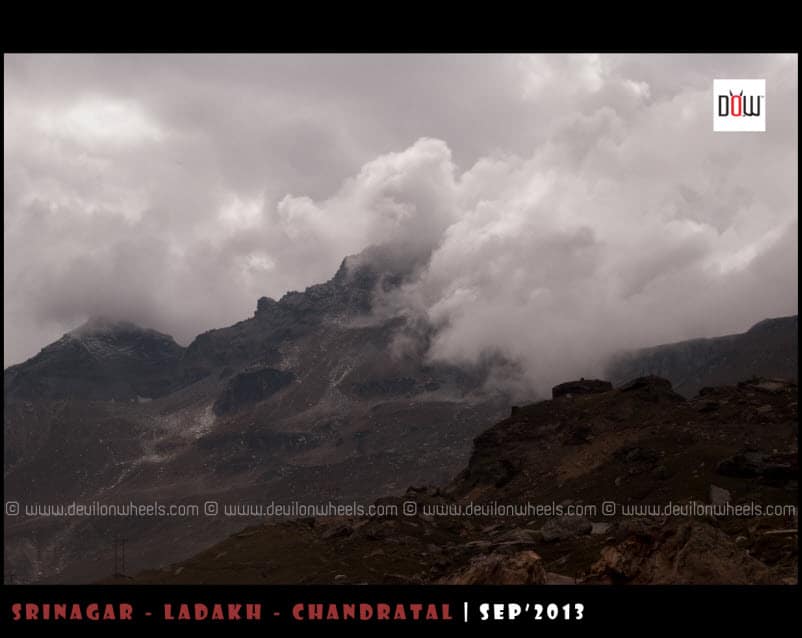 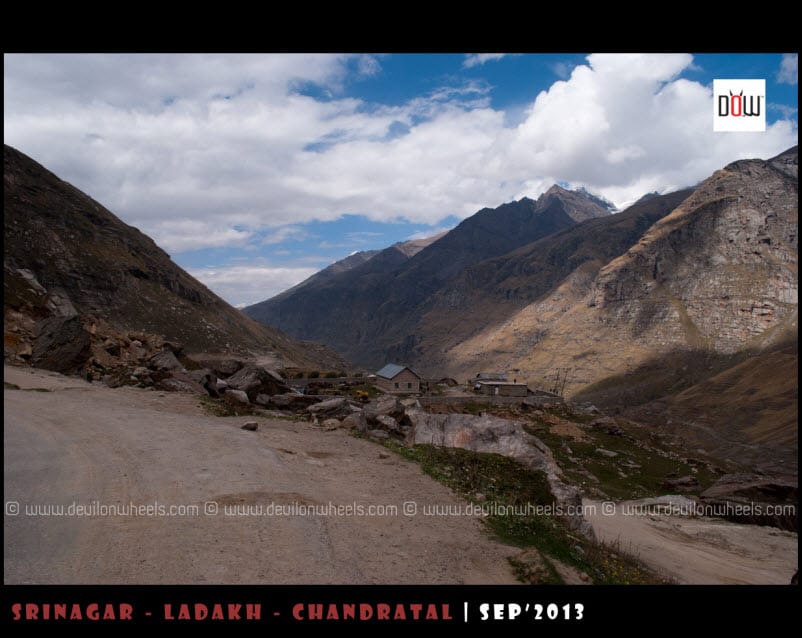 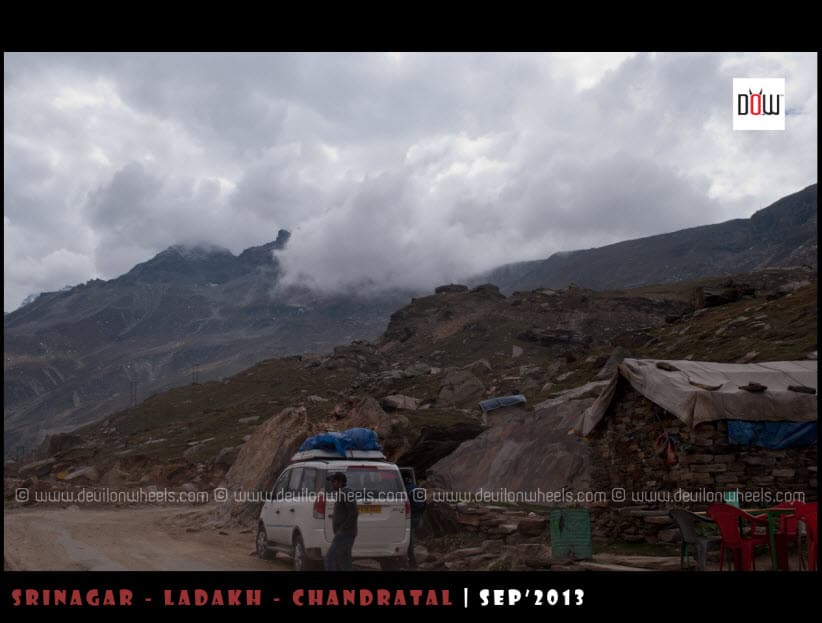 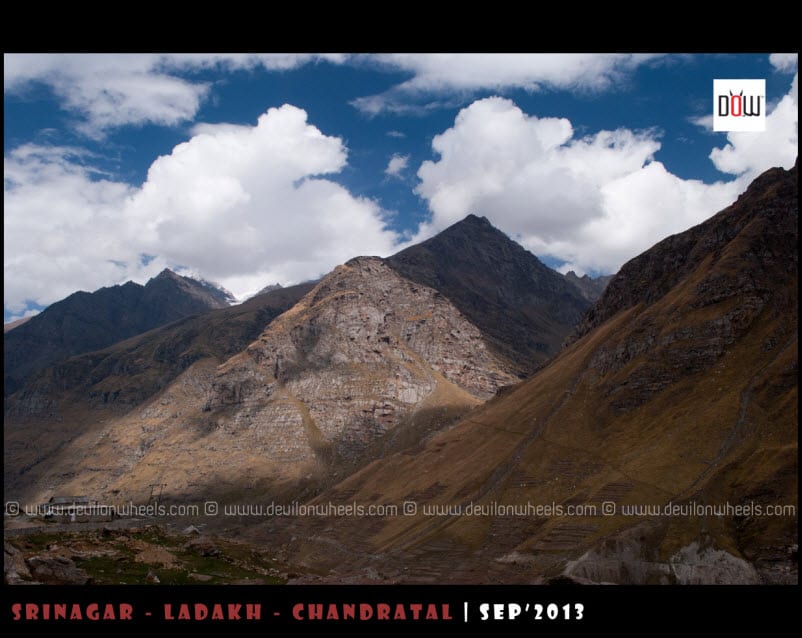 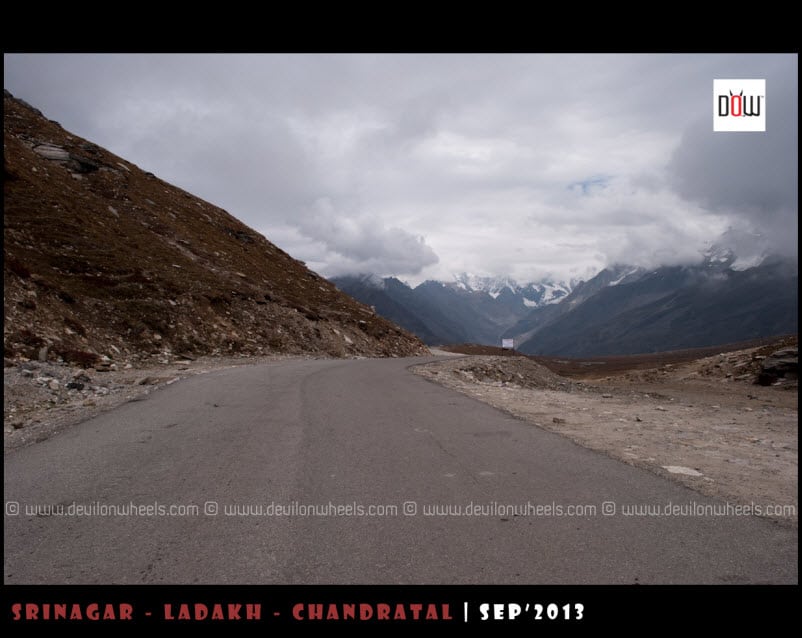 A view from Rohtang Pass I had never seen Rohtang Pass so deserted with lovely tarred roads on either side of it. I always have seen it as a filthy pass, with lots of litter and a kind of market always running there for tourist rush. This time it looked raw and pristine, thanks to the order of the court to ban all such activities at Rohtang Pass and preserve its nature/fragile ecosystem surrounding it. We started rolling down and saw similar state of Marhi as well. Since, the roads were very good all the way till Manali, it did not took much time for us to reach there.

Driving into the clouds at Rohtang Pass Manali, as seen while descending from Rohtang Pass The loops to Rohtang Pass 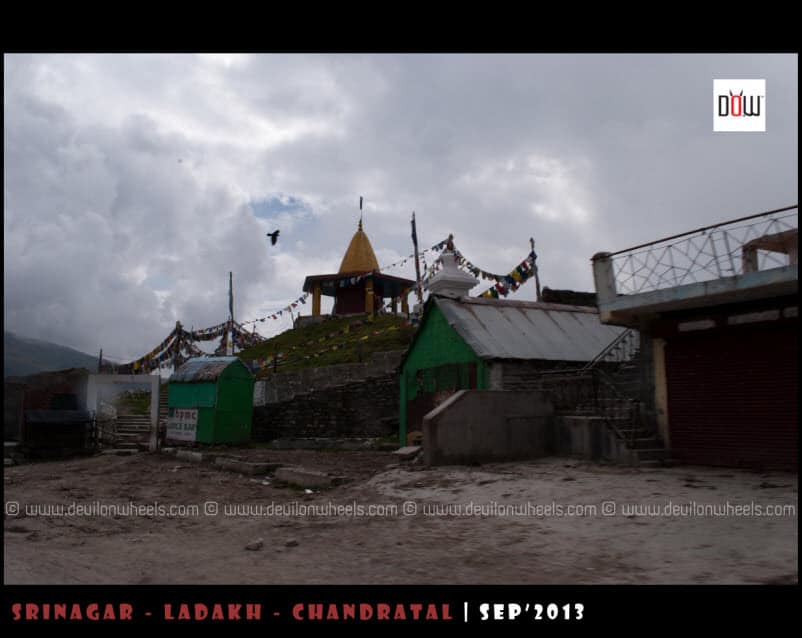 As we left Rohtang Pass behind… And we move further closer to Manali I rushed to the HPTDC Office to cancel the tickets we earlier booked and got us the new tickets in place of them for today. Then rushed to the hotel where Sourabh, Nabeel and rest of the people would be staying as we Delhi guys leave in the evening itself. They stayed at the branch of the Hotel Triveni, Sissu only which looked quite fine to me. We settled the bills with the drivers, thanked them for our safety delivery 😉 😉 … We did not have much time, just 1 Hr, before the HPTDC Volvo leaves around 3.30 PM. We all went to the market and had lunch together, one last time. It took ages for food to come and we gulped it as fast we can but still had to leave in between after bidding adieus to Sourabh, Pradip, Mainak, Sahil and Nabeel. These 5 stayed there for one more day at Manali and had fun of paragliding at Solang Valley next day before they returned to their respective homes across India. Me, my 2 cousins and Jiwesh left in the Volvo while Shakti left at night for Hoshiarpur.

I was tired, so by evening, we were sleeping like anything. It was plain old Volvo journey from Manali to Delhi as we reached in the early hours and I took an auto back home where family was already awake, waiting for my arrival.

This marked the END of this EPIC ADVENTURE of Ladakh DoW Mega Meet 2013 These 15 odd articles, summing up the entire mega adventure helped me re-live those moments I spent with all others who attended this first mega meet by DoW and these loving memories will be cherished forever deep in our hearts. Thank you each one of you for being part of this Mega Meet and I am sure that you must had enjoyed every bit of it. We did travel to far flung places in Ladakh but most importantly we travelled Responsibly 🙂

Have you even been to such a mega adventure?? If yes, how about sharing the story with me too. BTW, as this year DoW Mega Meet 2014 is approaching, the anxiety levels have started rising as over 50+ confirmations are already there for yet another Mega Adventure by DoW for Social Causes in Spiti Valley this year 🙂 🙂 … You can read about it here: Hidden Gems of Spiti Valley | DoW Mega Meet 2014