Last day was quit wonderful with loads of noble causes spreading smiles in around Kaza. And today, everyone was pumped up for the last leg of the Mega Meet as we leave for Kunzum Pass – Chandratal and then from there to Manali and back home. Chandratal (read travel guide here), yes, sounds pretty exciting again 😀 :D… It was time to settle the bills in the morning with Tsering bhai and with so many people in the group, it always was a chaotic deal. Since, the entire bills of our journey from Tabo to Kaza over last few days had to be settled, I decided to help Tsering bhai on it and yet again was a wrong decision as it took almost about 4 Hrs to settle up everything and in noon only our group with Samar and Pawanji could leave for Chandratal 😥 🙁 … We have lost quite amount of sunlight and usually it takes about 4 Hrs to reach Chandratal from Kaza but with small cars like mine and Anuj it meant hell lot of more time :cry:.

Meanwhile, Sany had asked us to visit Key Monastery and buy him that old ancient blazer which the old monk was selling during our White Spiti Winter Adventure in March 2014. So, first we had to go up there which almost backed us by another hour or so. We got that blazer, dumped in the car and moved as hurriedly as possible.

On the way from Kaza to Key Monastery 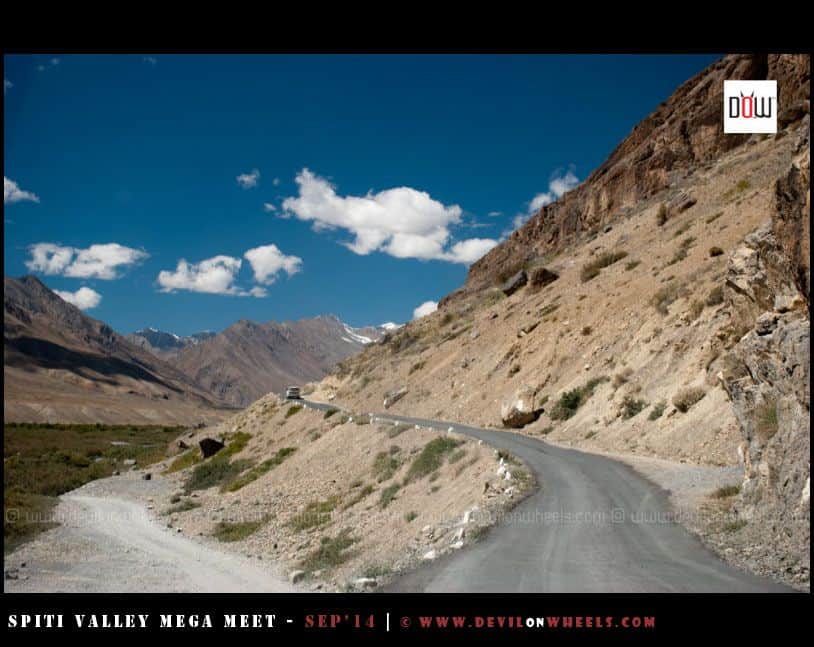 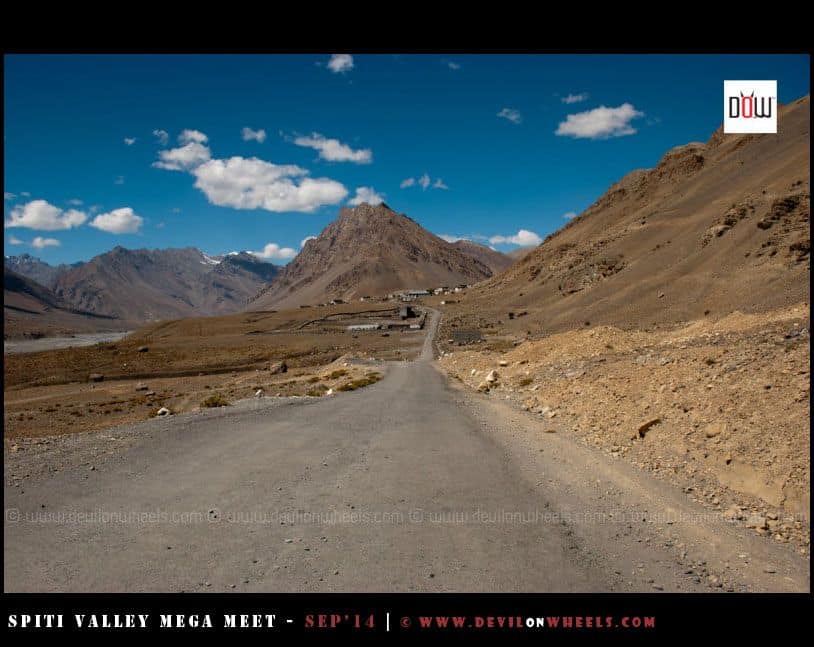 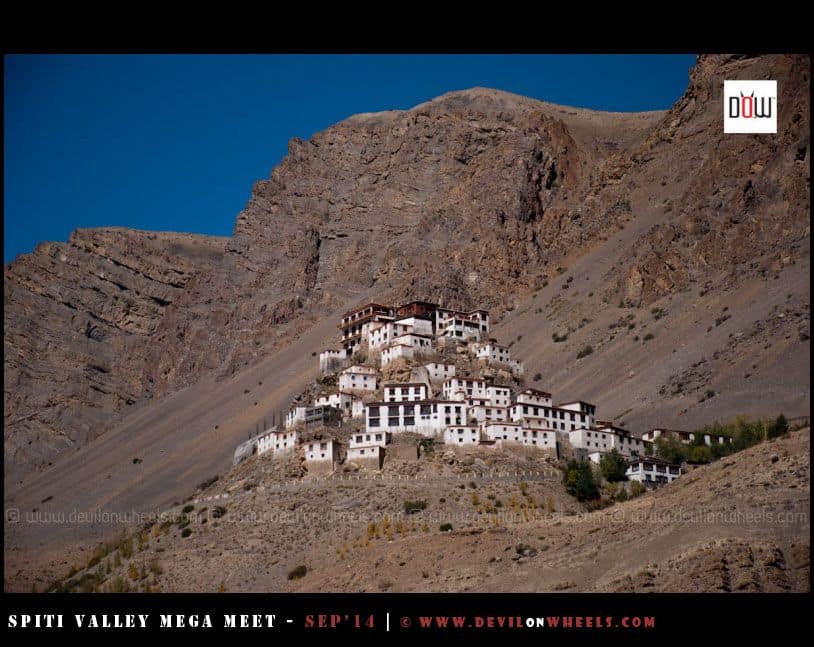 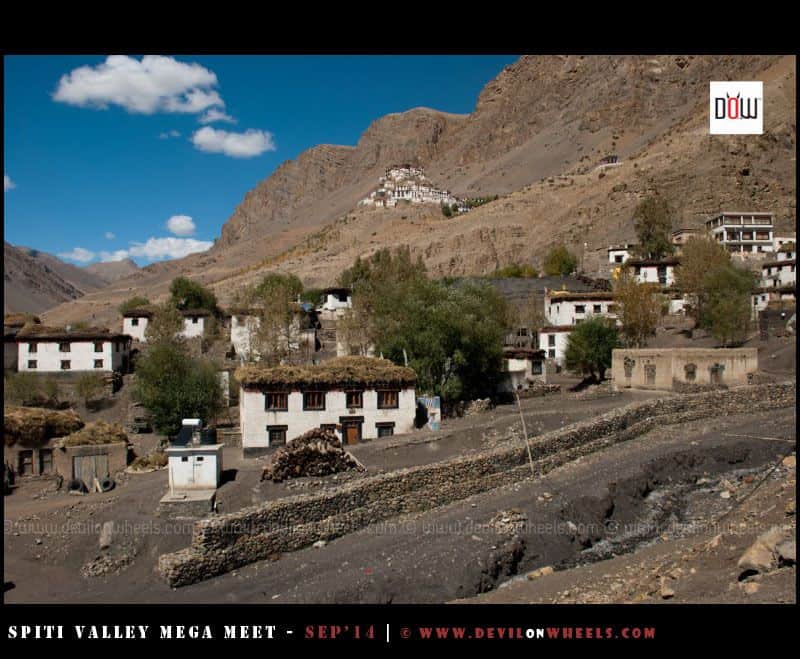 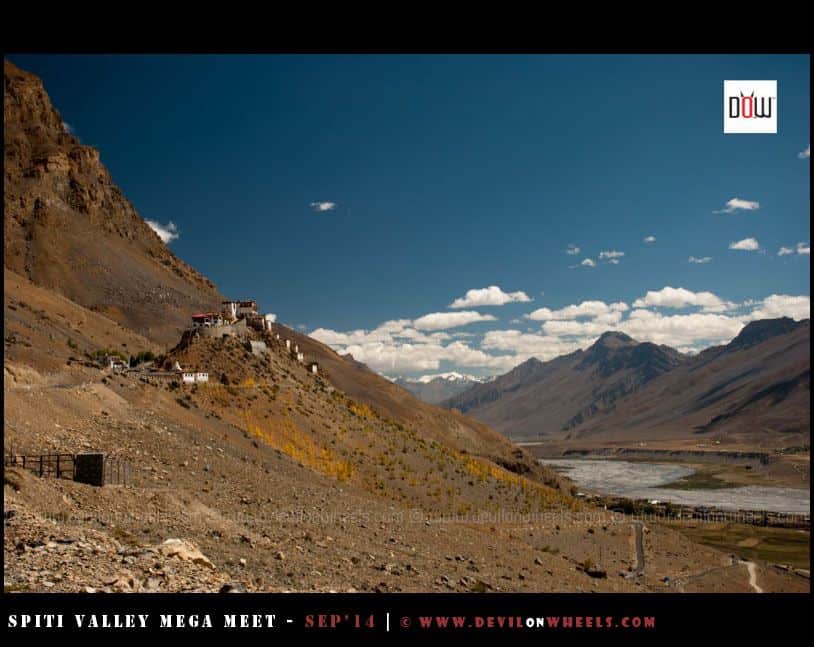 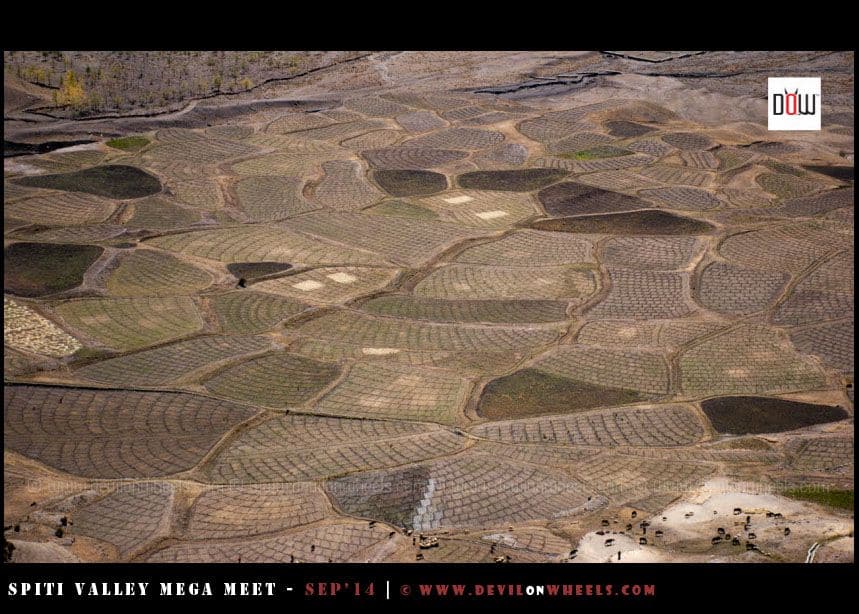 That heavenly view of Spiti Valley towards Moorang 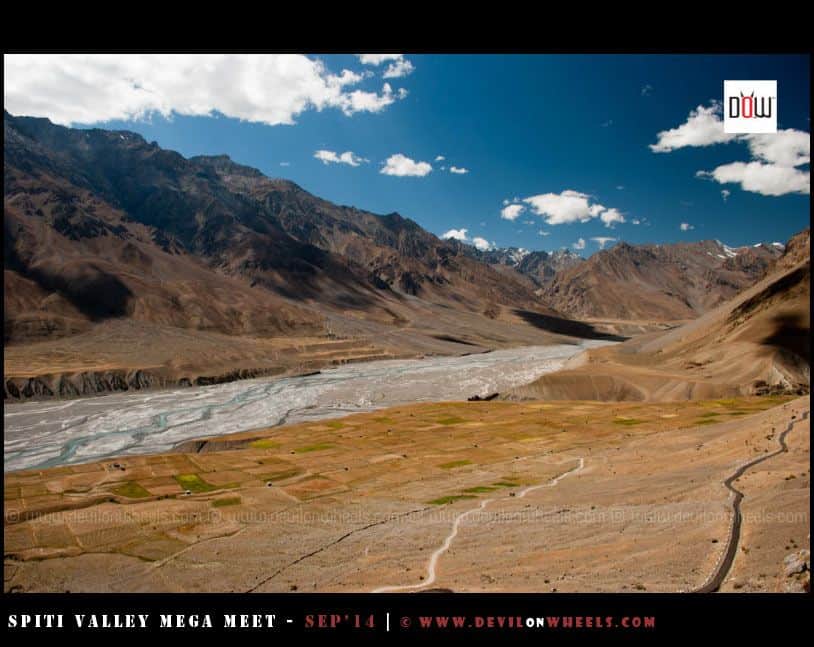 Remember the Alia bhatt from Highway?? Yes, it was from Key Monastery 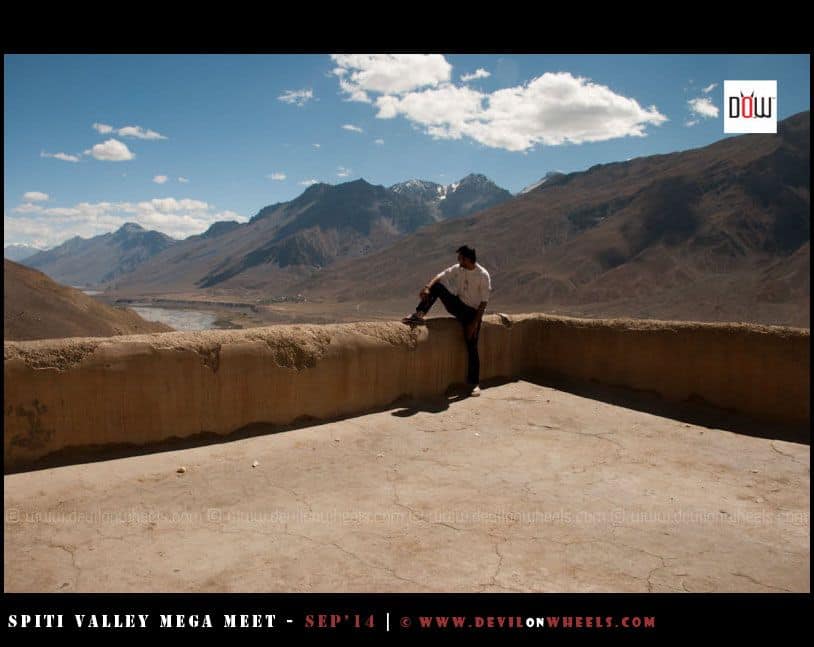 Vinay and that Old Monk 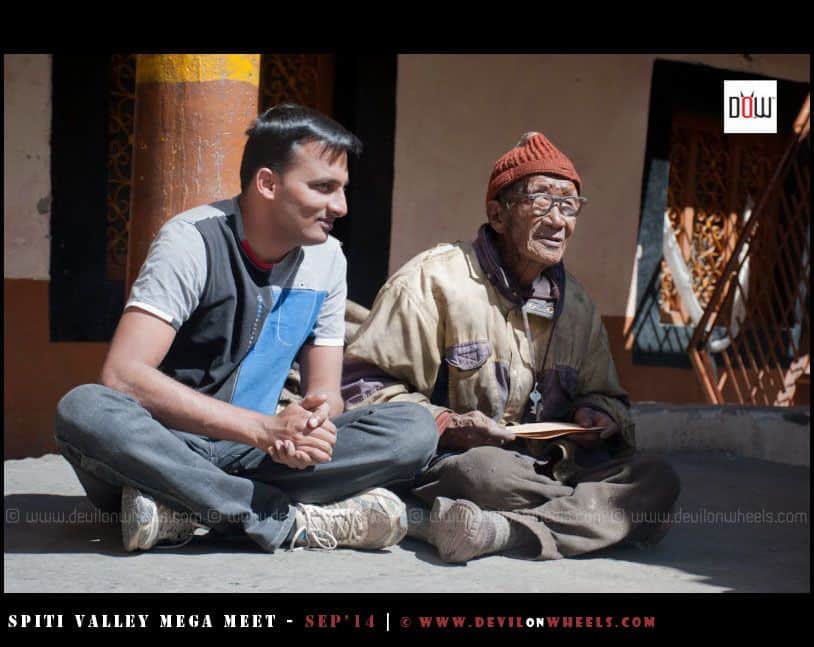 Yet again, I was traveling this beautiful section of the road from Kaza to Kunzum Pass in a hurried manner which forced us to have less stops for photographs despite the majestic and jaw dropping landscapes on this route. It was the third time in a row for me and this time sounded most disappointing all because so much time was wasted in settling the bills of the whole group rather any natural reason 🙁 🙁 … It was a wrong choice but has been corrected now in this mega meet where each individual team owner is accountable for the bill settlement 🙂 🙂 … 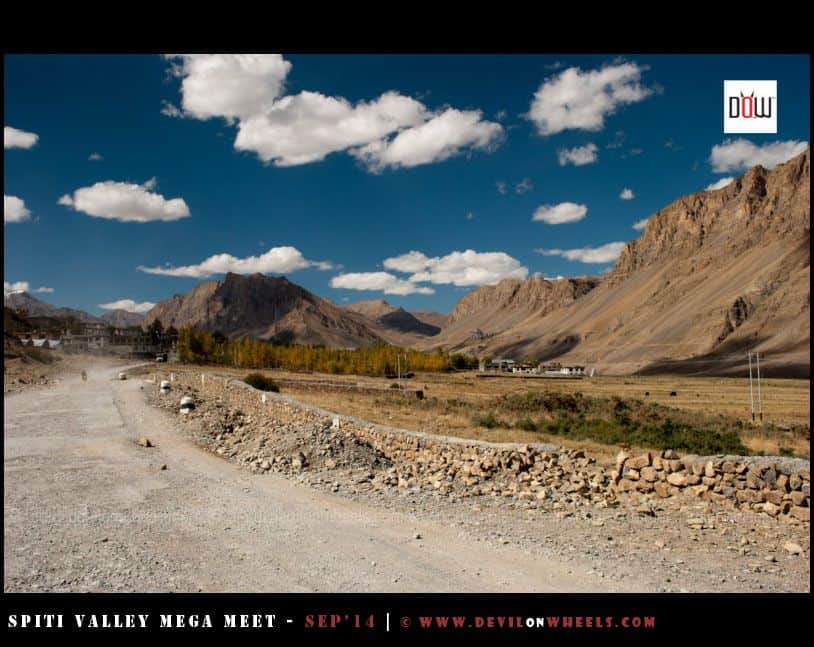 Key Monastery as seen from Rangrik 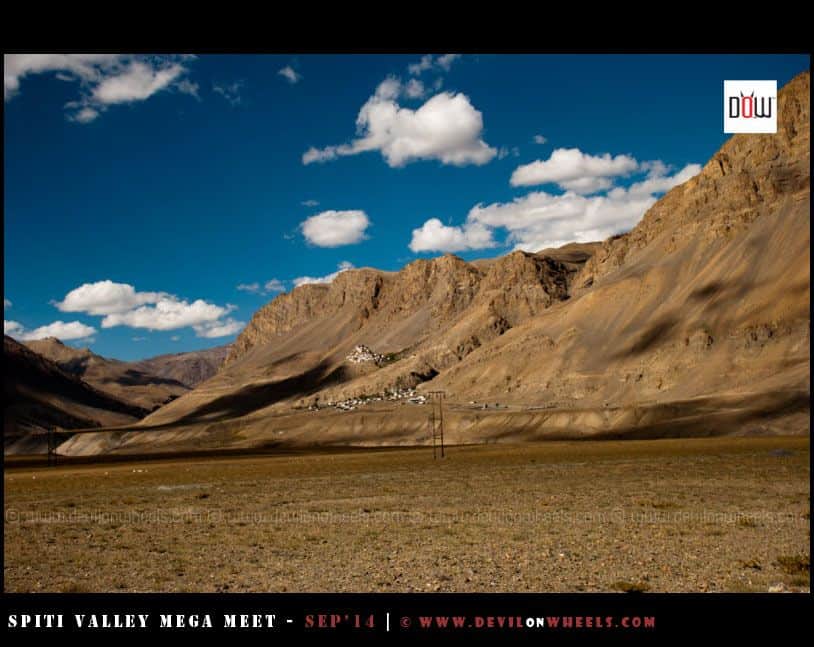 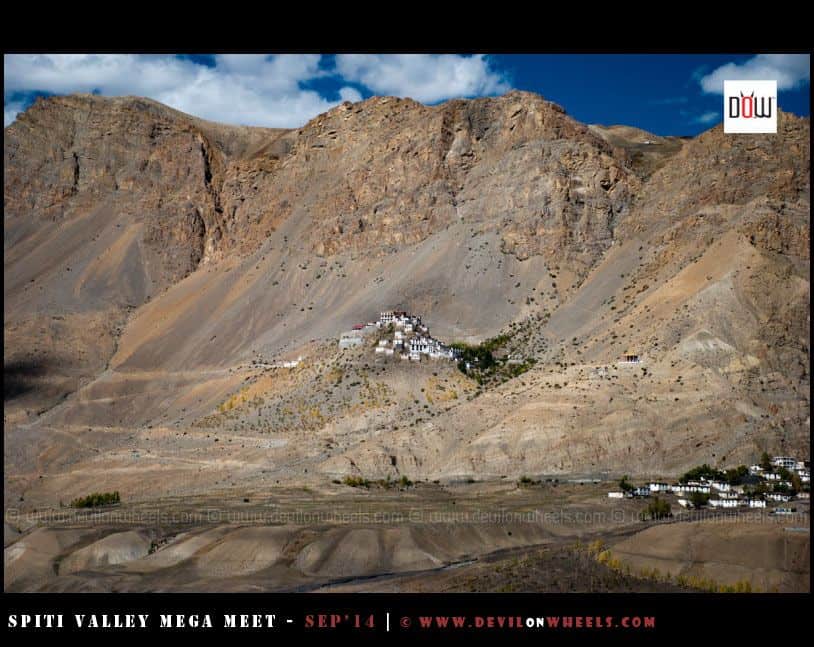 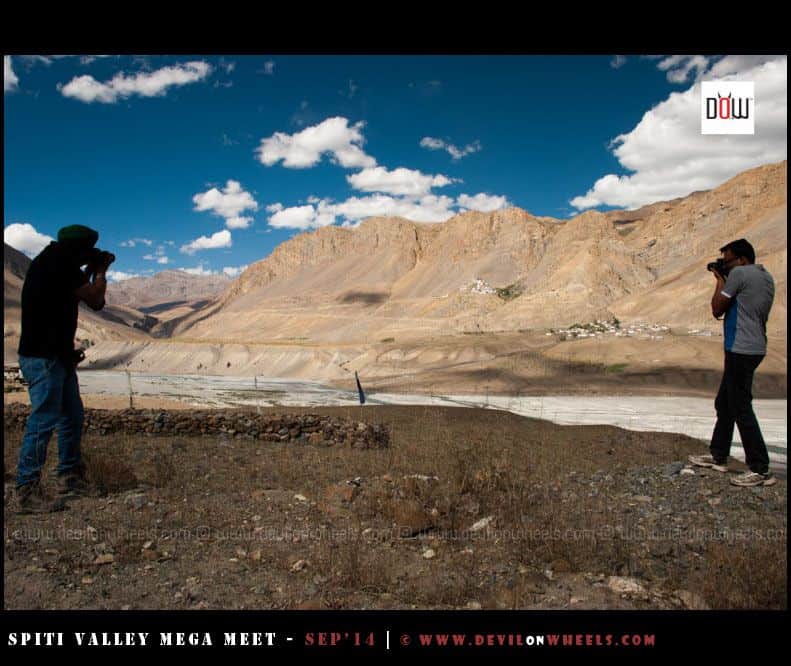 The Sun and Shades in Spiti Valley 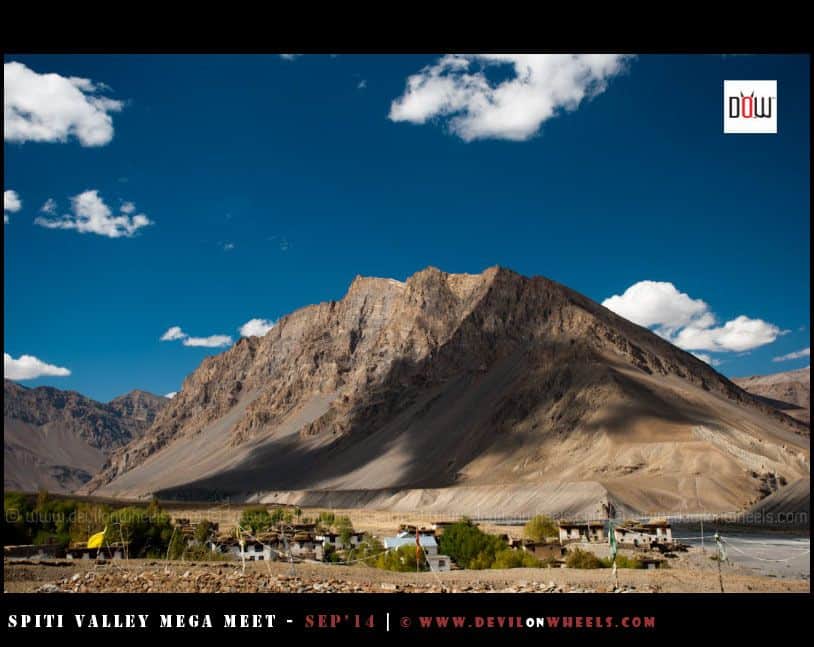 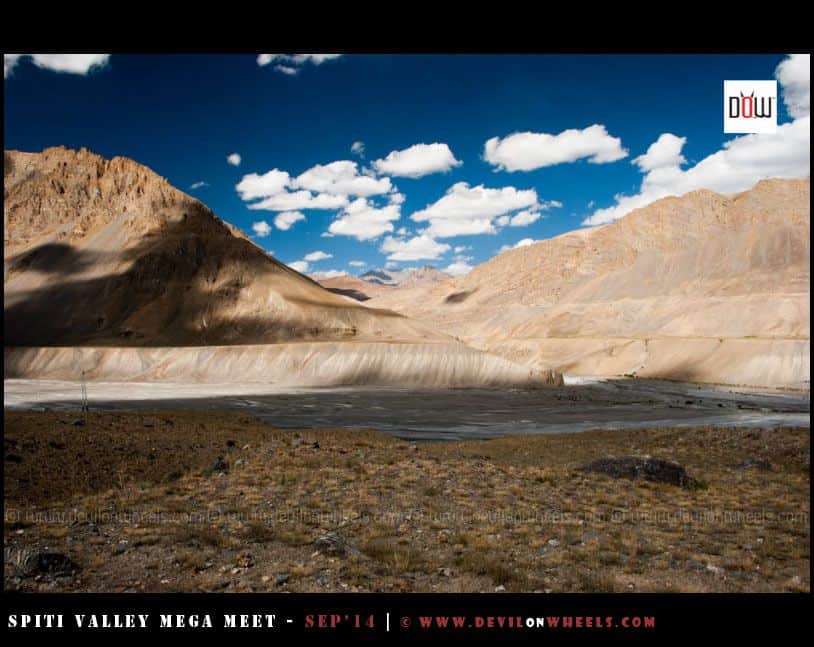 On the way to Kunzum Pass from Kaza 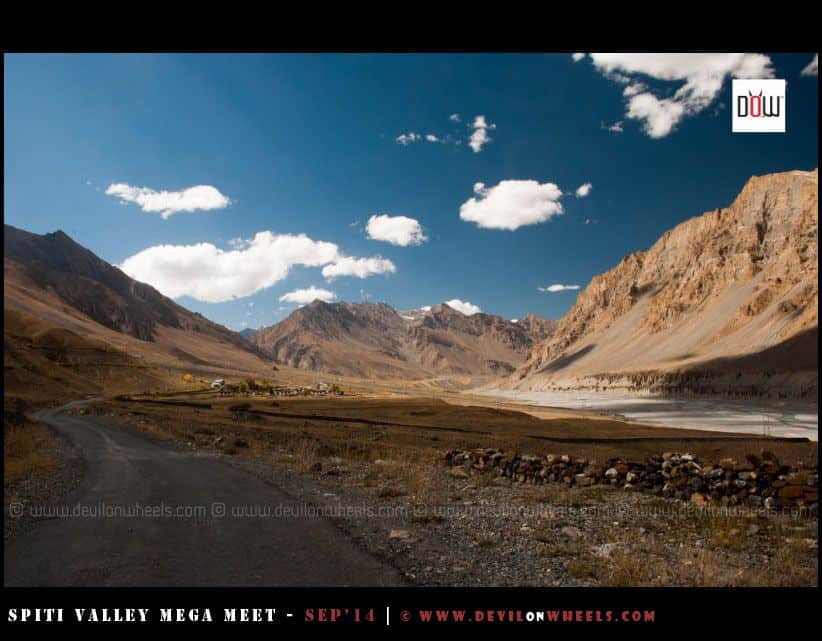 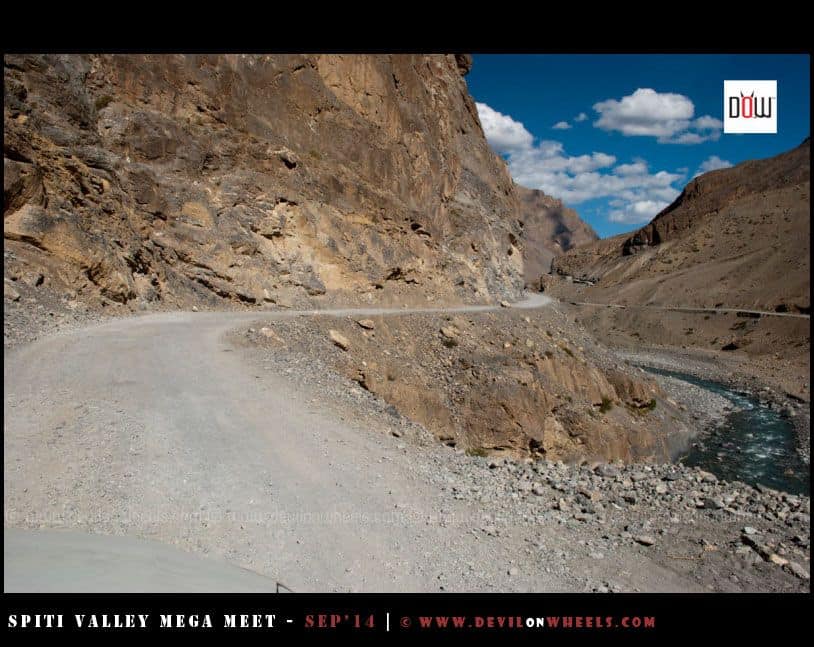 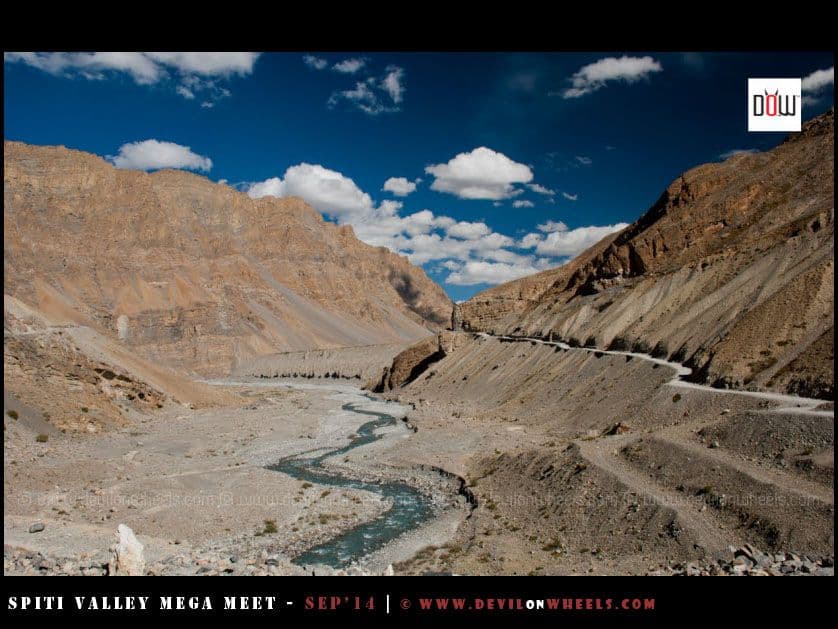 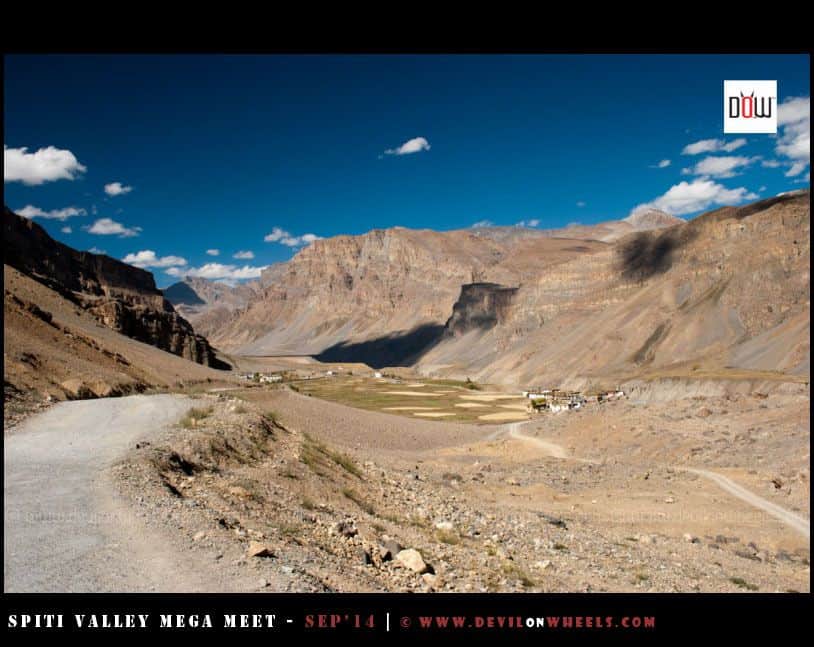 The Grand Canyon of Spiti 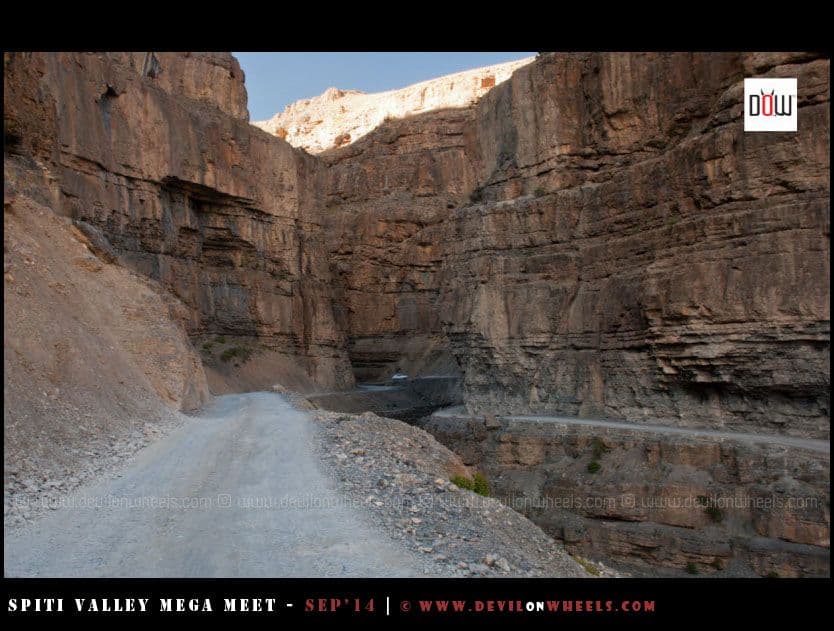 Anyways by 5 PM we reached Losar, marked the entry in police register and moved ahead. Few cars from our convoy including Vipin and Anuj were waiting for us up there and moved with us towards Kunzum Pass which was about 19 KMs from Losar. The road now turned much worse and the speed was too slow due to rocks, boulders, big potholes, sharp stones and what now. Always there was a fear in mind that anything can happen on this road because these sharp stones on this route are known to puncture or pierce the tyres. The fear was not because of the puncture rather the fading daylight. At a snails pace, we somehow reached the Kunzum top in shades of fading light, did our Parikarma and moved quickly down towards Batal.

I had decided not to take the challenge of further adventure and do road to Chandratal in my car (dzire) that late in the evening in dark hours. So, we decided to continue to Batal, park the small cars there and then move to Chandratal in Pawanji’s and Vipin’s cars. This side of the road towards Batal from Kunzum Pass had more tricky sections to save the belly of our car with much bigger boulders and pot holes placed right at an angle which is difficult to negotiate on hair pin bends 😉 😉 … As if someone had placed them up for practice circuit of advanced off-roading level 😀 😀 …

However, just before the last light faded for the day, we safely reached Batal dhabha of dorje uncle and had two glasses each of tea and some chit-puts because none of us had luxury of having lunch due to shortage of time. Chandratal visit was already dusted in ground the moment we started around 1 PM from Kaza. Now, it was 3 KMs up climb to the diversion point of Chandratal road and further 12.5 Kms to the campsite. However, driving at night was quite a blessing in disguise for newcomers to the region as you can’t see the deep gorge aside you 😉 😉 … So, with some adventures in dark we were finally able to reach the campsite at Parsol Camps run Bishan bhai up there at Chandratal.

Yes, we call it roads… 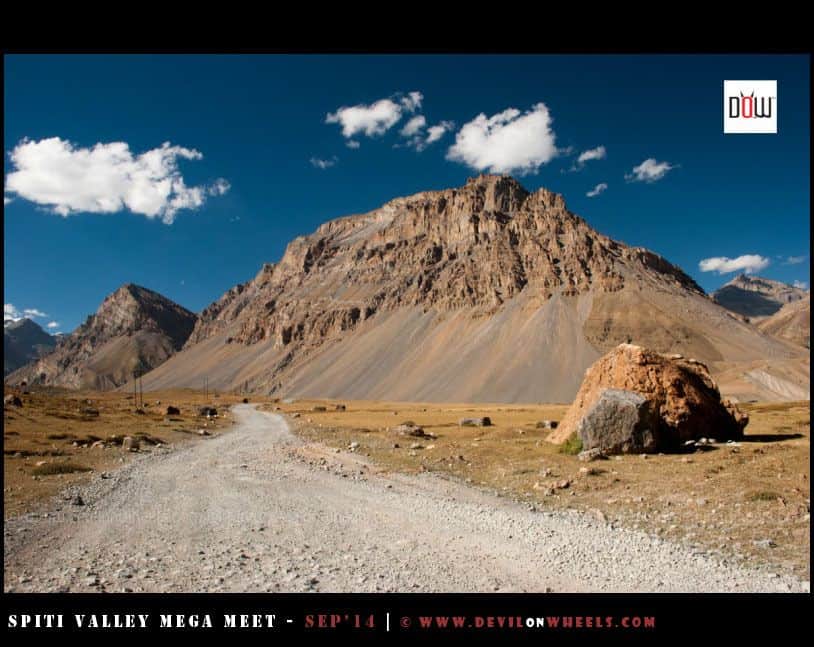 On the way to Losar 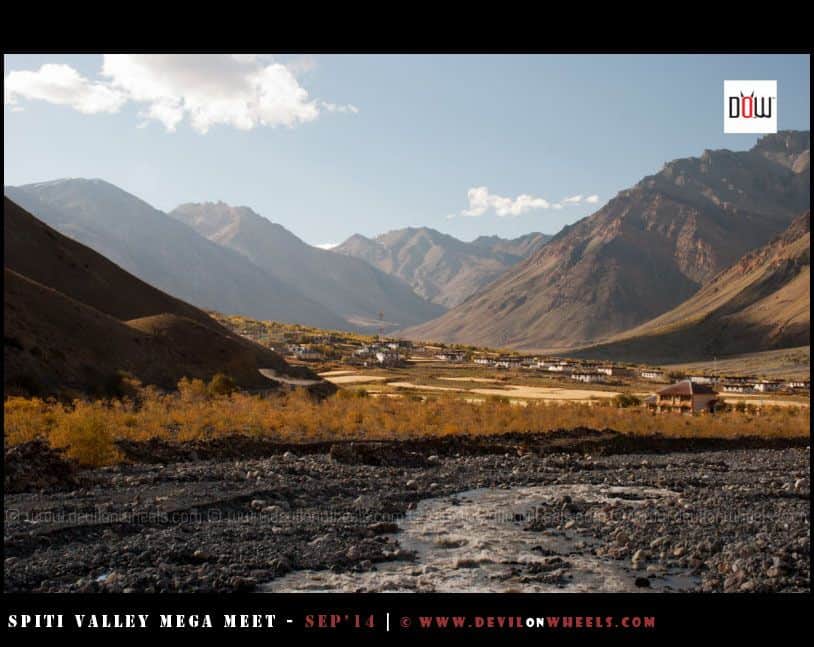 Yes, thats me and the machine at Kunzum Pass Top 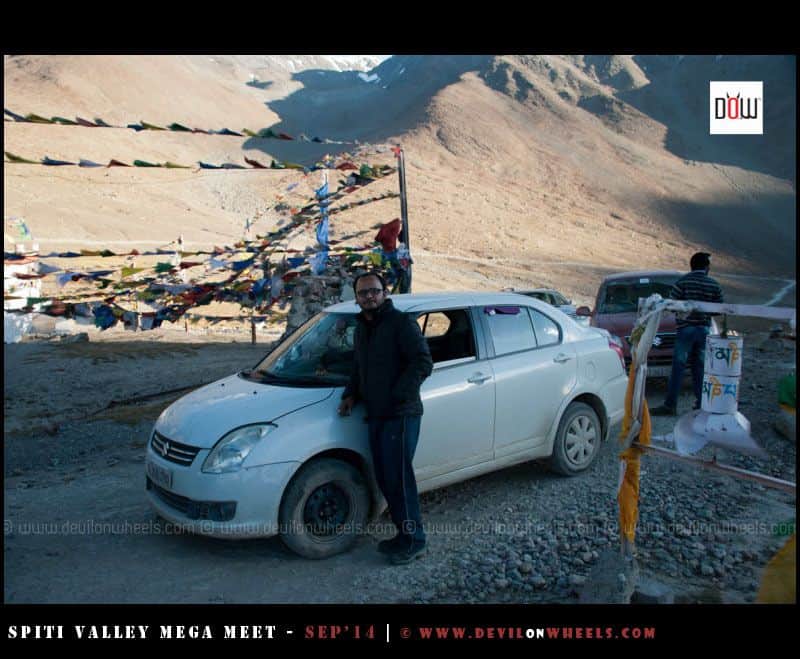 On the way to Chandratal from Batal in dark hours There was no mood now to pitch the camp and Bishan bhai along with Nawang bhai had already spared one for three of us. Aah, some relief it was 🙂 :)… It was damn cold up there and Aashish (our mod in DoW Community) had also reached there with his friend for a visit to Chandratal. I felt glad to see him up there and meet as it was an opportunity for me to release some frustrations out of last few days 😉 😉 … The food was OK and after many chit – chats in long cold hours, we went for the sleep. It was getting colder and colder that night with strong cold wind blowing outside the camp midst pin-drop silence around. The night was pitch black as if the stars in the galaxy up in sky would just come over you and take you with them. Just mind-blowing and how I came to know?? 😀 😀 …

Stay tuned for the last part of this Spiti Valley Mega Meet !!