22nd December 2012: We had a nice sleep last night though it was again decent cold and there was a similar routine by Junior of waking up and sleeping back 😉 … I was pretty much used to this age of parenthood by now so it was not that difficult to manage. Next morning I had set the alarm for 5 AM to capture the sunrise but already there were quite a few people up at the tower to capture the sunrise and that too in such cold conditions 😯 … There was so much noise of people running around that I never required the alarm 😀 … Such enthusiasts to see the Golden Glow over Peaks while I was more interested to capture the sun coming out of the mountains horizon. 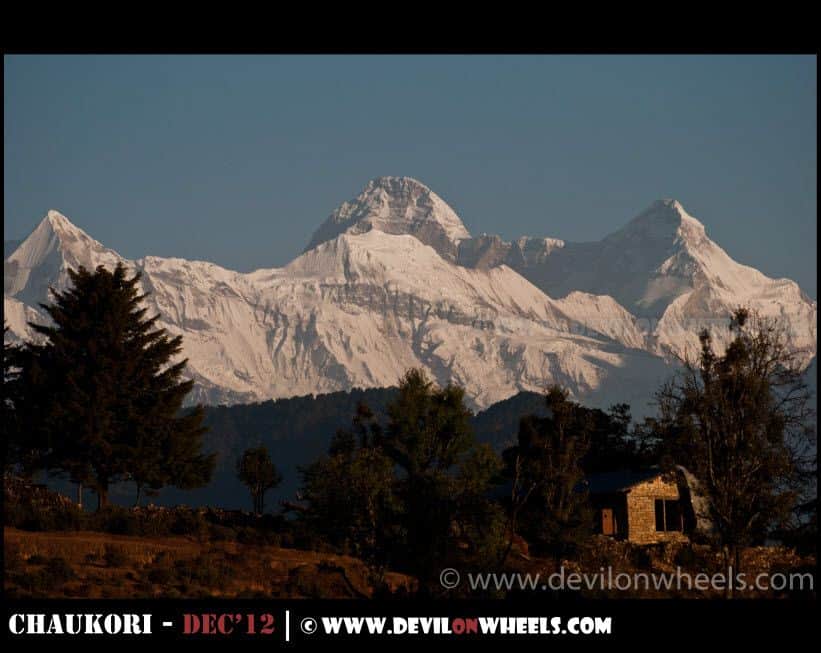 After braving the chill for almost about 40 odd minutes, the moment came when sun started to come out of the range of mountains towards east of Panchulli Peaks. It was simply breathtaking view, quite a treat to the eyes to see the sun coming out of horizon and glowing the snow clad peaks in front, with Golden Colors… Just that within 15 minutes the whole sunrise serial was over but keep in mind I had to brave that bone chilling wind for more than an hour in total to capture couple of shots of this artistic drama by nature 🙂 Breaking Out… Sunrise at Chaukori 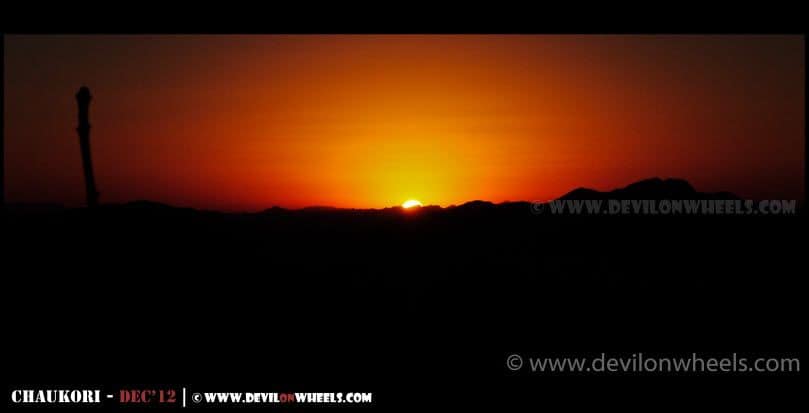 Almost out of Horizon… Sunrise at Chaukori 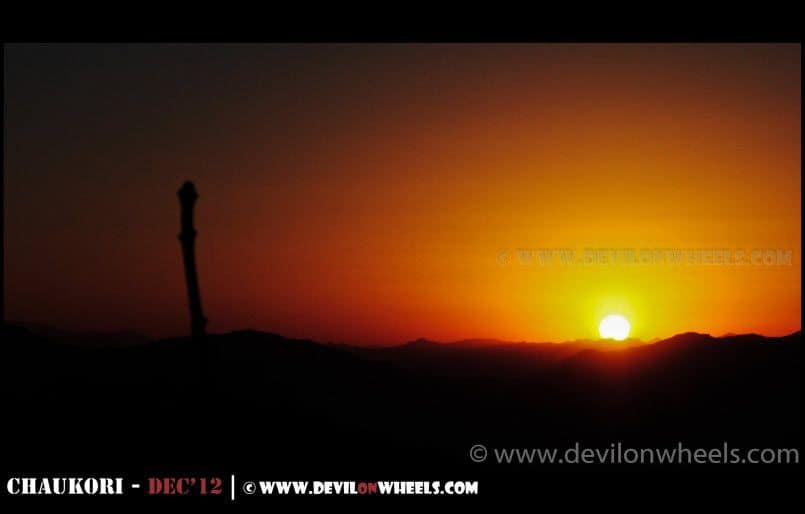 Well, I went back to the room and slept for couple of hours. We woke up, got our bags ready, Junior was all ready too and started running around in the garden in front. It was such a melodious feeling to be with your loved ones at the place which you love most, The Himalayas… Seeing the junior playing around with his mother, a series of dreams started developing and it took sometime to bring myself back to reality of returning home next day 😉 … After quick breakfast and getting couple of milk packs for Junior, we left for Kausani, a place where time sleeps. 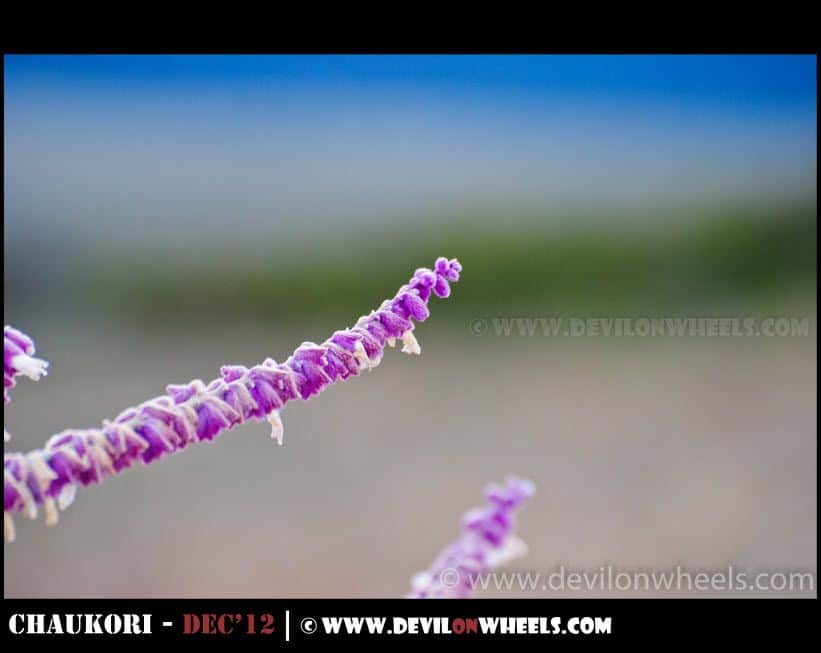 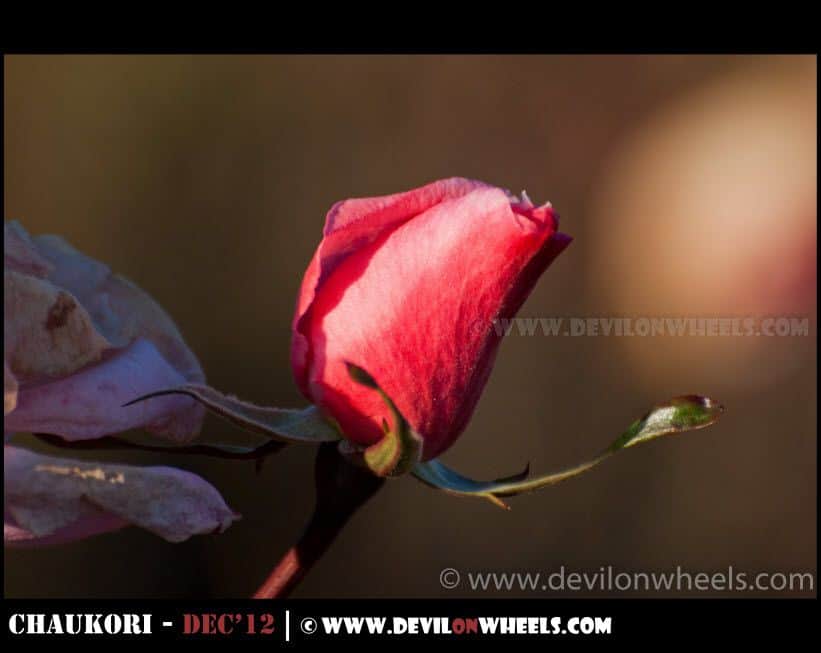 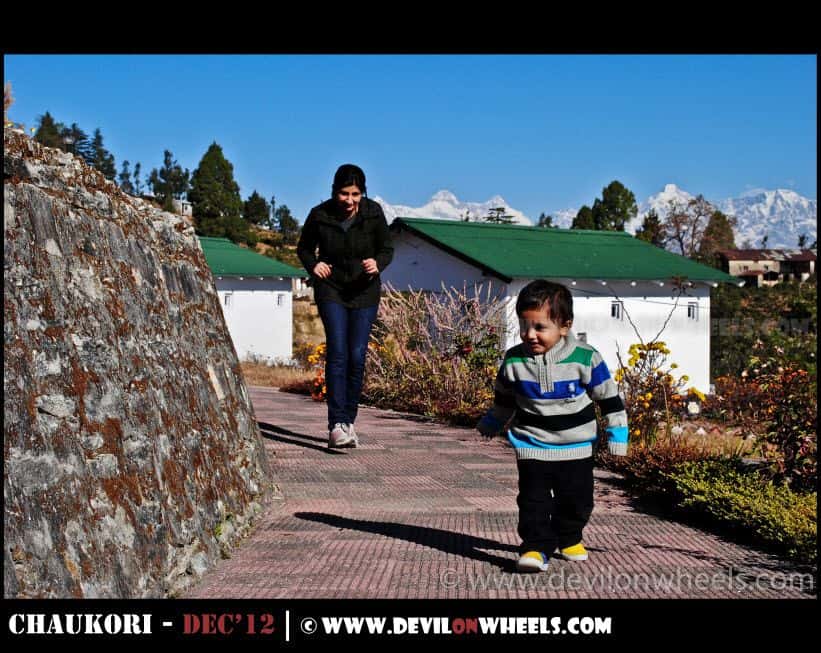 Kausani at an altitude of 1890 Mtrs, is about 85 Odd KMs from Chaukori and 52 KMs from Almora. The route goes via Bageshwar – Baijnath with lovely views of Panchulli, Mrigthuni and Trishul alongside. Since, it was about 3 Hrs drive from Chaukori so we were in no hurry and were driving at slow speed enjoying the vistas on the route. Roads were pretty decent all the way. After couple of hours came Bageshwar, a town which is situated on the confluence of Gomti river with Sarju river which is a tributary of Sharda or Kali river and joins Kali at Pancheswar. We were least interested to stop by the town and wanted a place to spend sometime near by Gomti river. Finally, we got an appropriate place to enjoy besides the river with a dhabha for Tea and Buns near by the banks. Getting to the bank was tricky but we all managed well and reached there. Enjoyed the tea and buns from the dhabha at the banks of the river whose water was cold enough :)… Junior was liking it completely and he started throwing small – small stones into the water and when the water splashed up, he used to laugh a loud. It was something new to him and he was completely enjoying a merry time there. Unfortunately, time was running so we had to move ON towards Kausani. Bageshwar Town on the way to Kausani 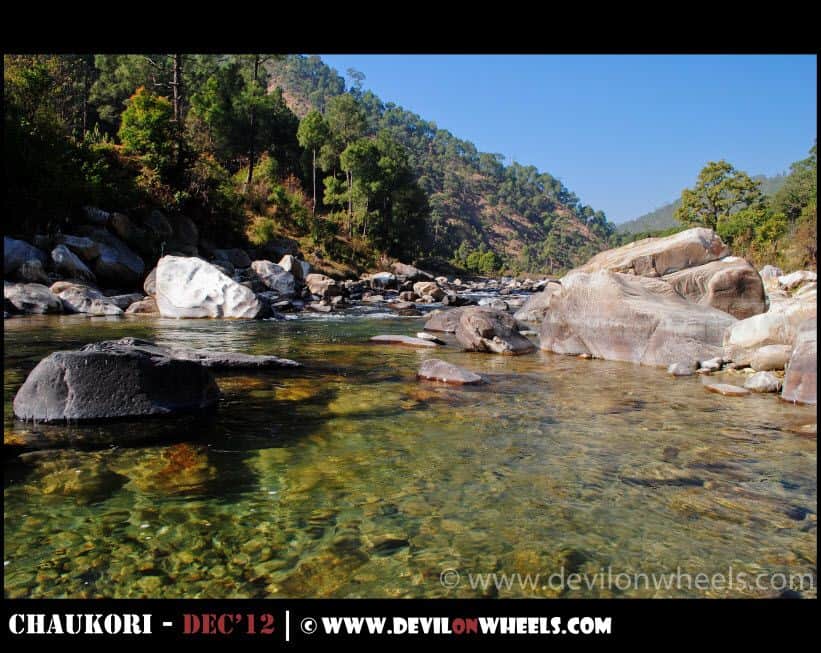 Next planned stoppage was Baijnath Temple which fall on the route and is just 18 KMs from Kausani. Baijnath Temple is situated on the banks of the Gomti river and has idols of Lord Shiva, Ganesh, Parvati, Chandika, Kuber, Surya and Brahma. Temple was built by the Kumaon Katyuri king in almost 1150 AD and has its own importance in mythology as it is said that Lord Shiva married Paravati Mata, at the confluence of River Gomti & Garur Ganga. After spending about an hour or so where junior even got excited offering food for fishes in the river aside, we left for Kausani and reach in next half on hour by 4 PM. Again I had booked KMVN at Kausani which is the last hotel at the point where the road ends. The 180 degree views various peaks especially of Trishul were just majestic from the room itself or you can say corridor in front of the room. We arranged some Woodstock for bonfire in night by paying a local villager nearby and ordered food for late lunch. It was a place which gave the feeling that time had just stopped there. We enjoyed some quite moments sitting beside each other, ogling at the High and Handsome peaks in front and then came the time of Golden Glow Hour of Sunset. I took some pictures of sunset over the peaks and it was quite a dramatic view. Chill was increasing and the whole place was seriously quite with no sounds whatsoever around… We lighten up the bonfire, finally had some Old Monk as it was the last day of the trip followed by the dinner. Kausani felt like a perfect place, to spend good time with your family !!

We were only interested in the timelessness & splendid scenery of panoramic views from Kausani rather any tourist attractions. If you are interested then you can visit Anashakti Ashram, Lakshmi Ashram, Tea Gardens, Baijnath Temple which are among some of the tourists attractions around Kausani. Junior Enjoying the Views at Kausani

Next morning, I woke up early again braving the cold to capture the golden glow over Trishul Peak and get both perspectives of Sunset as well as Sunrise Golden Glows on Trishul Peak !! I cannot explain the feeling capturing both these majestic moments of everyday of our life… Something special it was. Well, I hardly felt any cold and took series of pictures over sunrise before going back inside the room. We had to make a long run back to home from Kausani about 430 odd KMs, so without wasting much time I asked everyone to get ready and specially the junior 😉 … A Flower from Kausani Ahh.. The Old Monk, a friend in cold conditions 😉 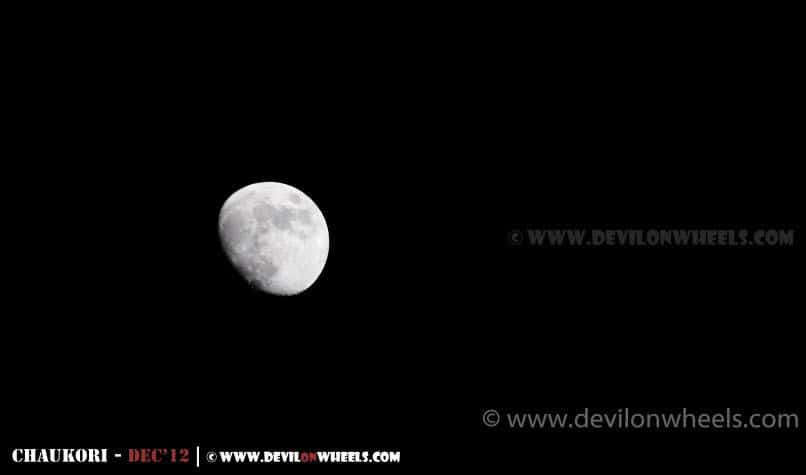 23rd December 2012: We had our breakfast by 9 AM & we all were ready to leave the place with heavy heart and knew that we are into the mad run from Kausani to Delhi without any pictures or breaks further. We drove through Almora and then towards Kathgodam while enjoying the drive. However, there was a setback again as we descended from Almora,the Junior threw out again 😥 … Well, I guess there was something wrong with the ascend and descend around Almora only as he threw out both times near Almora. May be frequent short curves were responsible for it. However, some clean-up process and after a while he was fine again.

As we descended further smiles were back on his face and finally after long grueling run we managed to reach near Rampur where we bought some 5 Kgs for Guavas as my wife is very fond of them 🙂 … So, set, this was our lunch 😀 and we continued the drive only to meet the engraving traffic jam at Moradabad, though this time it did not last that long and within an hour we were out. Finally, stopped at a restaurant near Gajaraula, just aside McD, where we had our dinner. Food was just OK. After that, simple drive home to Delhi to end this lovely Travel Trip…

I hope you enjoyed the Travel Tale and before I say end to this emotional as well as special Family Travel Tale, being maiden trip to Himalayas for my Junior Devil, please treat your eyes with both magical Golden Glows of the day at Trishul Peak as seen from Kausani having Sunrise & Sunset in a single frame… 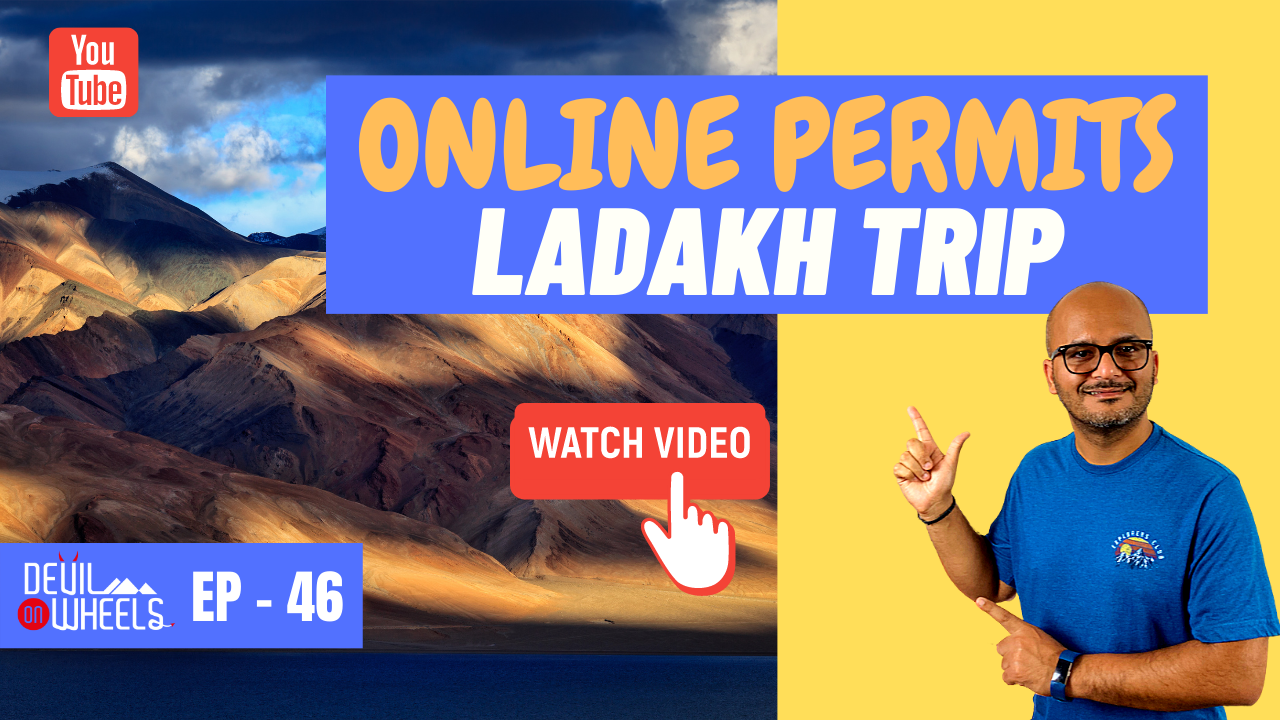