The night in Kaza was very cold and it was snowing, though lightly almost whole night. I was buried under the thick layers of blankets and quilts and a strange thing happened.

A Snow filled Morning at Kaza 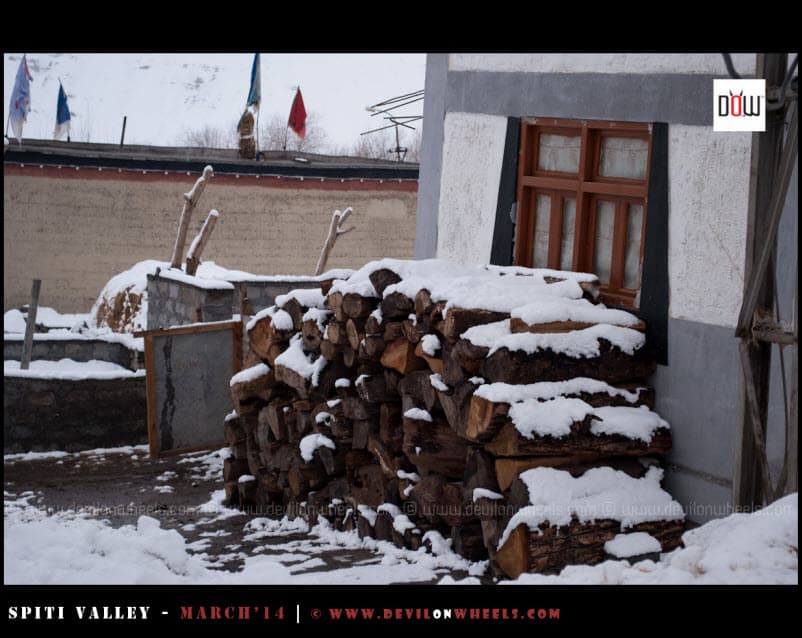 The main door of the hotel started banging in the middle of the night and I had no clue what was going on. There was a marriage on the other side of the river and Tsering bhai told me that they may create chaos after getting drunk in the night. Door was constantly banging and I woke up to see the time, 1.30 AM it was 😯 😯 … Somehow I managed to get out of thick layer of blankets in some -15 degrees or less to check who is it. I called out and there was a local lady asking for Motu Bhai and Keys. She said “Neeche se log aayein hain kholo” (People have come from lower terrain, open the door) and I replied “I do not know where are keys, motu bhai knows them and he is at his house” … Those drunkards in the marriage were also from Kinnaur, lower terrain and Tsering bhai was also using this term “Neeche se log aaye hain” and that local lady in the night also used the same. My thought process only told that they were the same drunkards and I refrained opening the door of my room as well as Tsering bhai left hotel on our trust 🙂 🙂

Watching Snowfall in Kaza at night 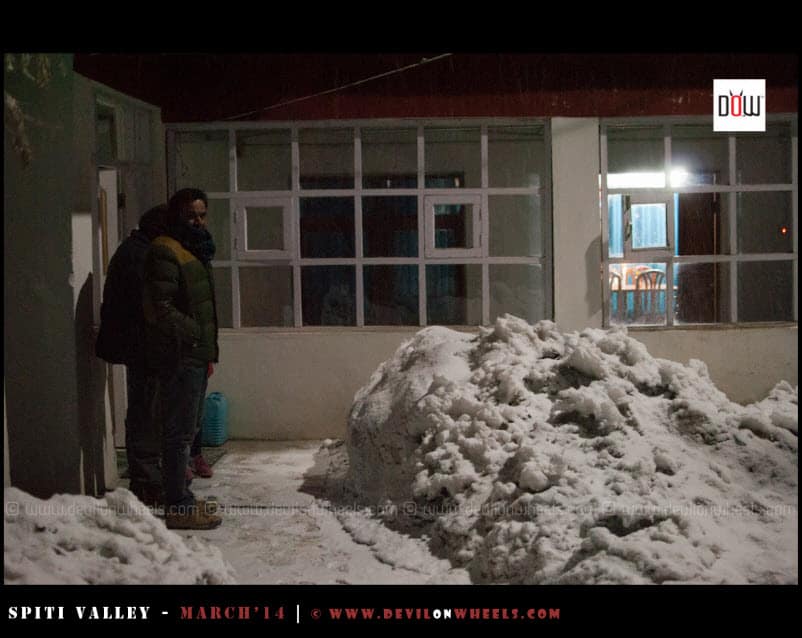 Snowfall in Kaza at night 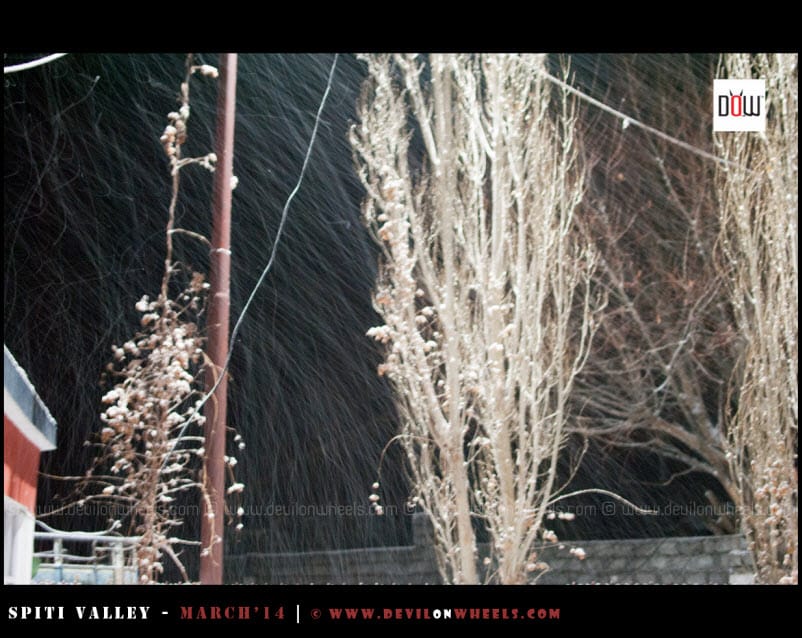 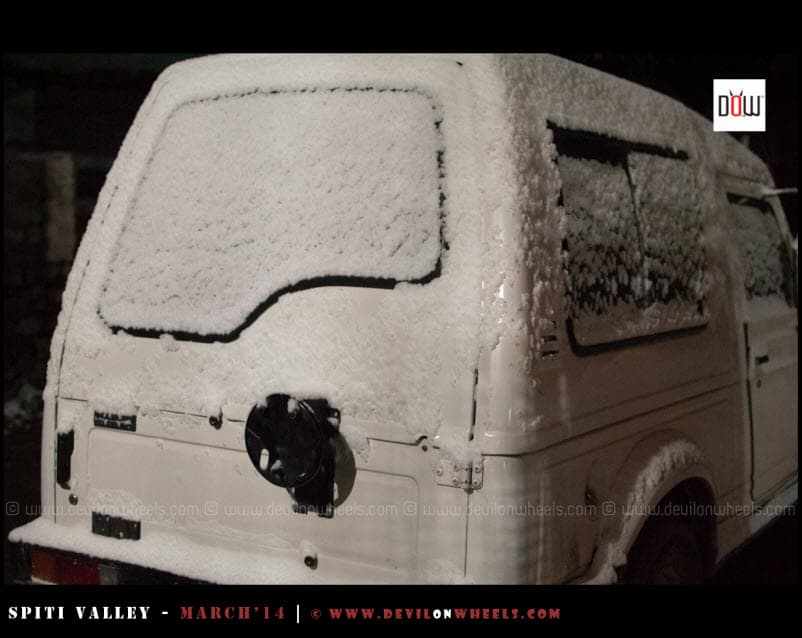 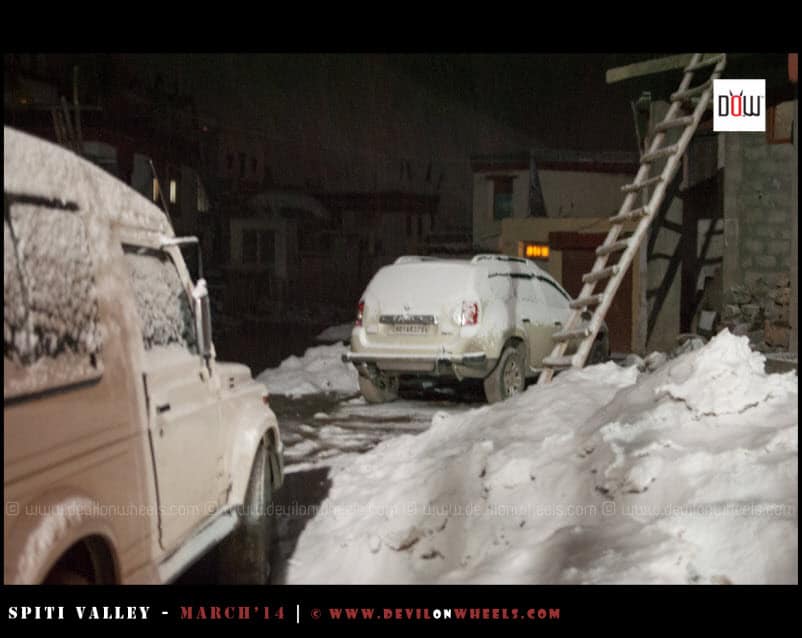 The heart was running faster and mind was dubious but there was a silence after that conversation ended. Believe me it was freezing cold and with all my woollens removed, it was too much struggle standing outside that thick layer of blankets. It took a lot of time to regain the warmth and sleep again. In the morning, Sany woke me up and said look who is out there… In no senses and lack of sleep I woke up and got out to see a friend Harsh out there from other travel community. We had met once and known each other online travel communities only for all the awesome adventure he does. He had few friends too with him and unfortunate part was these were the people who had come right at the middle of night from lower terrain 😯 😯 … I was cursing myself on not opening the door but I had reasons as confusion was all because of those Kinnauri drunkards. Above all none of them spoke out except that local lady and not even in wild imaginations I can believe that some one can land up in Kaza during that period, midst snowfall in the middle of the night 😯 😯

It was a indifferent situation for me at least and then after sharing few words we went down to bus depot to check if taxis are going back to Kinnaur or not. Light snowfall was still continuing and when we reached there, all taxis refused to travel foreseeing the dangers and risks in traveling in such season. The light snowfall melts quickly and brings shooting stone especially between Kaza to Tabo and then towards Sumdo. No local gave us positive support in venturing back including Tsering bhai. They all suggested to wait unless it cleared. What affirmed our stand was the words of HRTC Bus Depot caretaker that yesterday itself while coming back, the Reckong Peo – Kaza bus got shattered windows on that route due to same reason 😯 😯 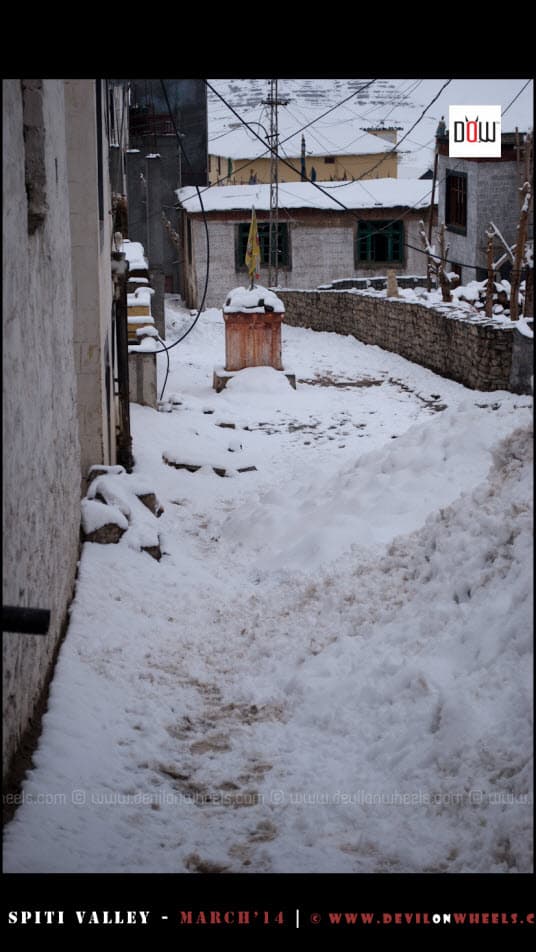 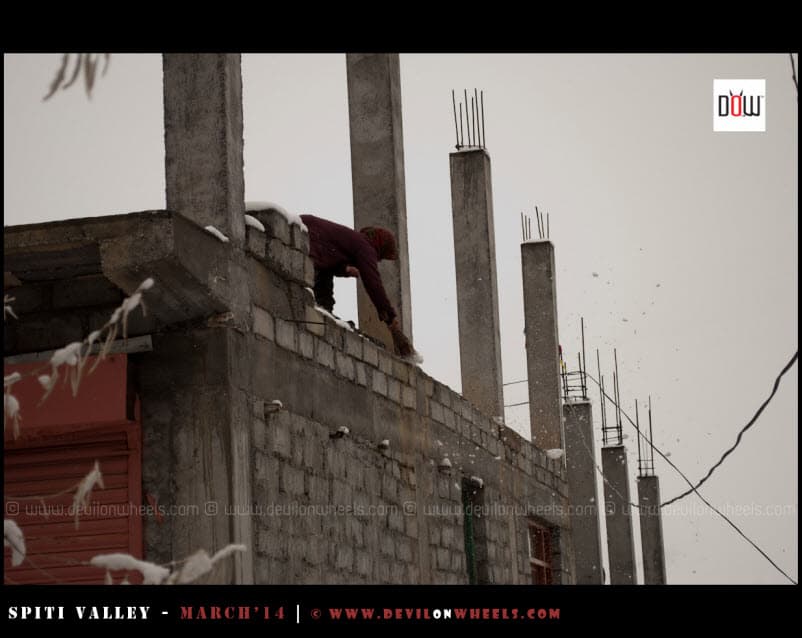 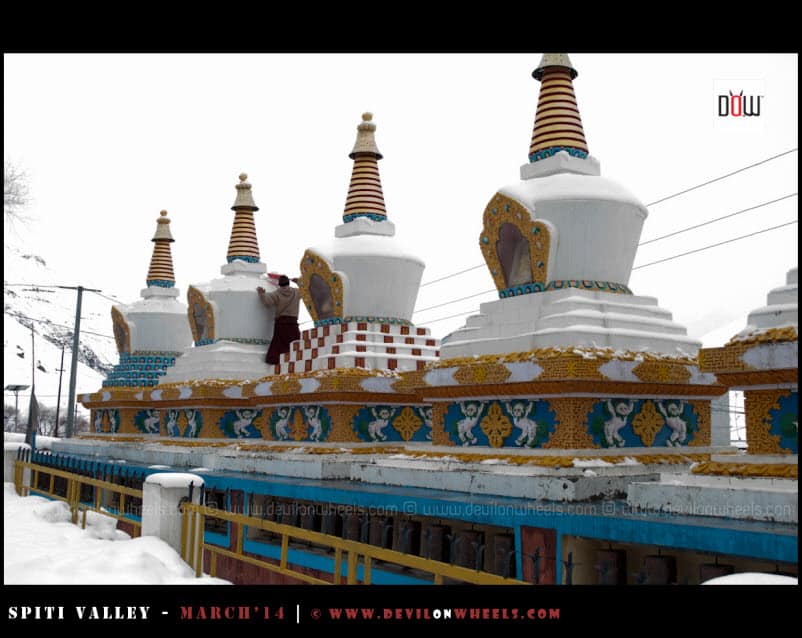 We went to Kaza market, brought more vegetables and pulses to cook Sambhar this time for Tsering bhai, Motu bhai and believe me the whole day we cooked Sambhar only as Dal refused to cook properly 😆 😆 … It was more like a Birbal ki Khichdi but thanks to Shikha & Sany bhai for the persistence and finally we ate it in the dinner, what was supposed to be in lunch 😀 😀 … Meanwhile, Tsering bhai brought us a bottle of single malt and we had some rounds of it to get some warmth. Whole day was spent in cooking Sambhar and chit-chatting on various topics.

Enjoying a walk in snow in Kaza 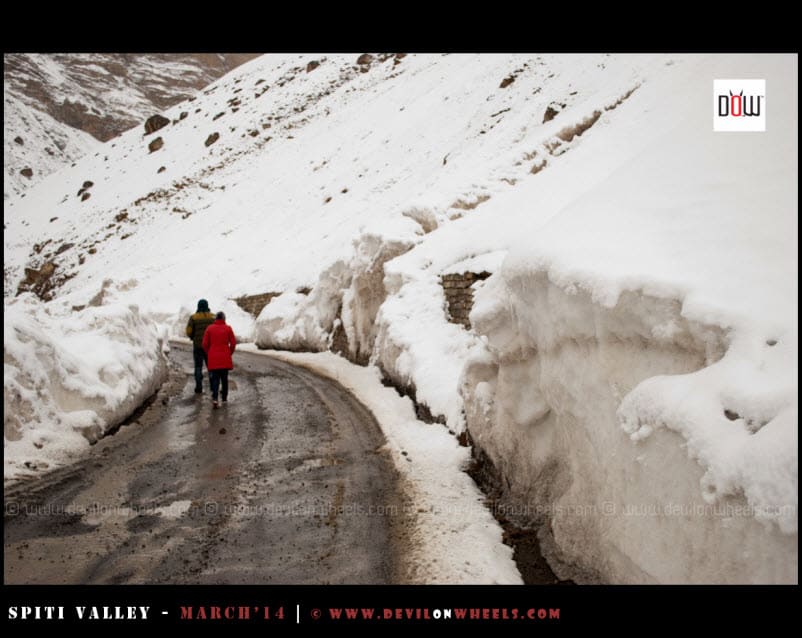 Me – Enjoying a pose in snow in Kaza 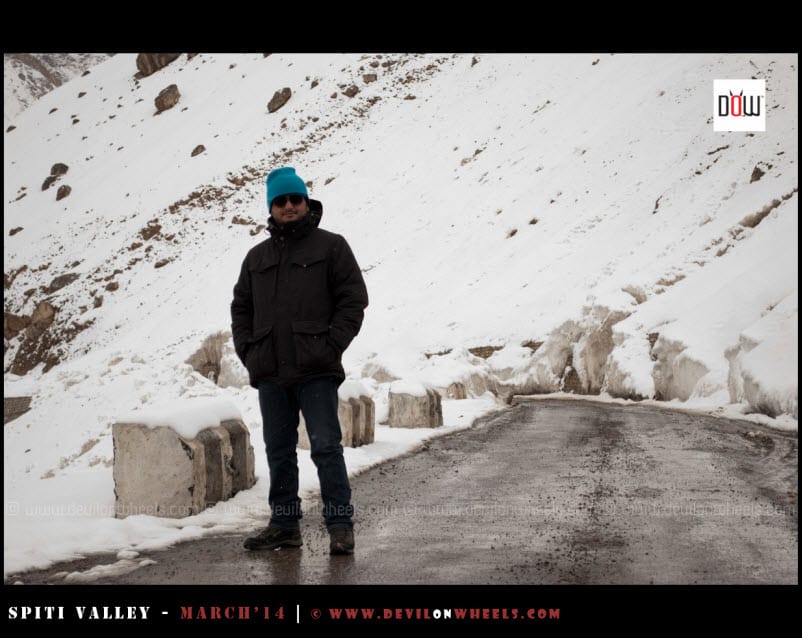 Sany – Enjoying a pose in snow in Kaza 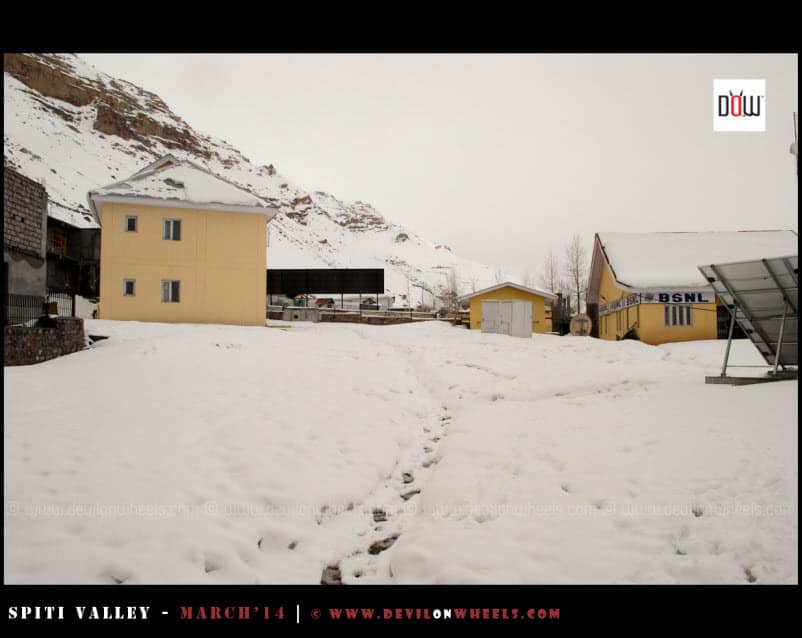 We slept for the day hoping weather will clean up and we can head back home from this wonderland, which was wearing white blanket all around by now.

Next day again we woke up early to see the situation BUT nothing had changed, light snowfall was still continuing. Similar rounds were done, going to Kaza taxi stand asking for people traveling with responses like summing up the fact “It is unsafe to travel today as well” … Sany was a bit disturbed by then as he had some important work back home, however, nothing is important than life’s safety which is what I feel. When local says “No” to something you want to do up there, get this very right deep into your heart “NO IT SHOULD ALWAYS BE” … Otherwise, be prepared for some hard sufferings or god must be extremely happy with your good deeds to let you pass un-suffered. Hence, whenever a local says “No” to me for anything, I always stick to it, no matter what.

Anyways, we again killed time discussing things on various topics and getting more understanding of needs of the people in Kaza, so that we can work effectively in our upcoming initiative of Spiti 360 for the betterment of lives of the people up there. We spent sometime in the evening with the adorable and lovely kids of Tsering bhai and it was quite a fun in those candid moments with them, though I was missing my kid & wifey too by that time. It was good time spent I believe whole day and in the evening we went to Kaza Helipad to get some pictures.

Duster Posing at Helipad outside Kaza A view of Kaza from Helipad Late evening, Tsering bhai took us to his home where his mother and wife welcomed us with big hearts & warm smiles. I had privilege to stay at Tsering bhai home as the below two rooms in the front are available for the homestay and auntyji then as well took good care of all of us. We were overwhelmed to receive such respect and hospitality from Tsering bhai & his family. It was the most special moment of the trip. After taking blessings from auntiji and bidding adieus to rest of the family, we went back to the hotel for the dinner.

The sky had cleared, snowfall had stopped and we could see all stars studded like diamonds. The hopes of leaving back home tomorrow over Deathway of Kinnaur were quite high tonight as we went to bed.

As weather clears up in Kaza in evening Star trails can be spotted as weather is cleared at night I hope you liked this part of the Snow White Spiti Valley Travel Tale. Stay tuned for the next part coming up very soon “Deadly Roads of Kinnaur” 🙂 🙂

Have you ever been frozen in to a place such as Kaza or any other? Or are you planning a drive to Spiti Valley over it sometime soon and have any queries? Do share, in either comments section below or in Itinerary Advice Forum of DoW Community with all other devils 🙂 🙂