Last night at Kaza was comfortable, despite the snowfall. May be I got used to the temperature OR snowfall does help in given respite from dry cold. It was a  bleak morning at Kaza with dark clouds and a bit of light snowfall. Today we had plans to visit Lhalung village in Lingti Valley and Dhangkar Monastery which we know would be completed in the first half of the day itself and next half was planned for the rest. Both Tsering bhai and Motu bhai were there up in the morning in that extreme cold for us and believe me now an uneasy feeling was developing seeing them do all this for us. So, we all decided to lower some load and start preparing our breakfast on our own from tomorrow and also help get a taste of washing utensils in such extreme cold conditions. We all agreed on this part and having chats with Tsering bhai, we left for Lhalung Village as Dorje came right on time to pick us.

Lhalung is situated at an altitude of 3658 Mtrs about 28 KMs from Kaza having about 45-50 homes and many of them offer home stays in them.. You need to travel to Lingti village first from Kaza, about 18 KMs away, which has the power project plant on Kaza – Tabo road. There goes a diversion to Rama village, about 6 KMs from there and then across the bridge, further to Lhalung village about 4 KMs from Rama village. Keep in mind that you need to cross the bridge towards right, else you will take the road to Demul Village, which further goes up to Komic – Langza – Kaza OR Komic – Hikkim – Kaza routes.

Lhalung or Lhalun is called the "land of the gods" where lha means deities, devtas; lung means land, area. It is said that Lhalung devta is the head of all the gods/devtas of the valley and resides / comes from Tangmar Mountain which is located just beyond the village. Locals say that this mountain changes its colour based upon the mood of their deity where red means anger; yellow means happiness, etc.. Lhalung hosts a monastery or temple they call it, which is known as Sarkhang or Golden Temple. This monastery is considered to be one of the oldest monasteries of Spiti Valley dated late 10th century. There is also a sacred tree here which may be as old as the earliest monastery. Local also believe that this monastery was built by angels in one night. They do not allow to touch on the walls inside the monastery/temple complex because they feel the angels will leave their place and there will be no one to protect or safeguard them if these angels leave from this monastery.

Coming back to the story, we started the drive from Kaza in this bad weather, actually not bad but bad for photography since the sky was totally white with cloud cover. As you click the snow in the foreground and dull whiteness of sky in the background, makes mountains of snow difficult to stand apart 🙁 🙁 … I am also not so good in taking pictures, hence, for me it was tough to control the exposures. Anyways, we have to experience more than clicking pictures so we reached Lingti soon as last evening we anyhow came to Attargo, so not much pictures there. As soon as the climb from Lingti to Rama – Lhalung started, wow, the scenery started to change, so we started to disturb Dorje as it was my first time in Lingti Valley so I was more excited.

Views towards Kaza from diversion road of Lhalung 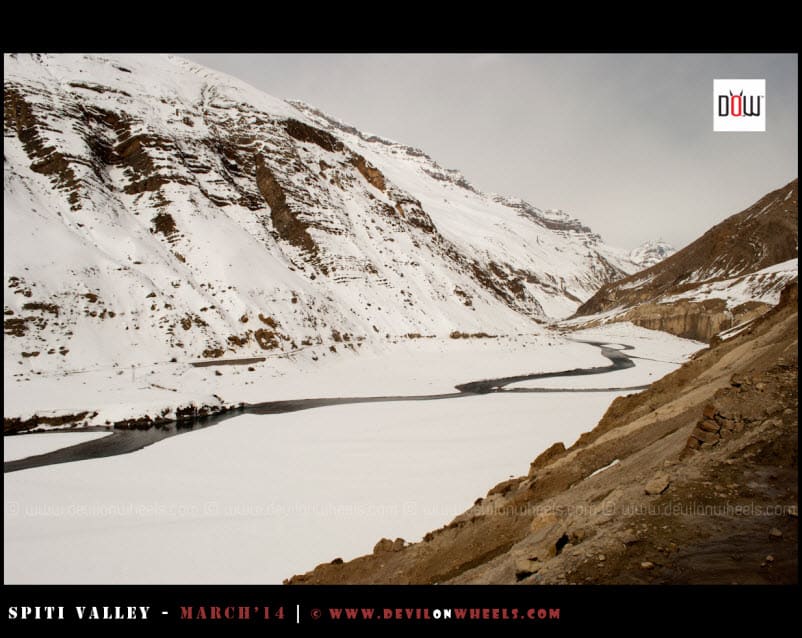 Views towards Tabo from diversion road of Lhalung 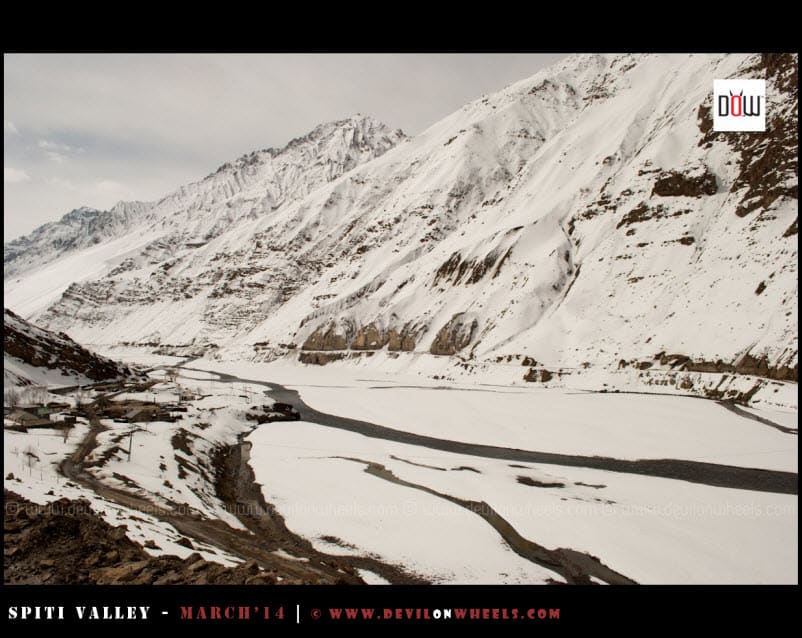 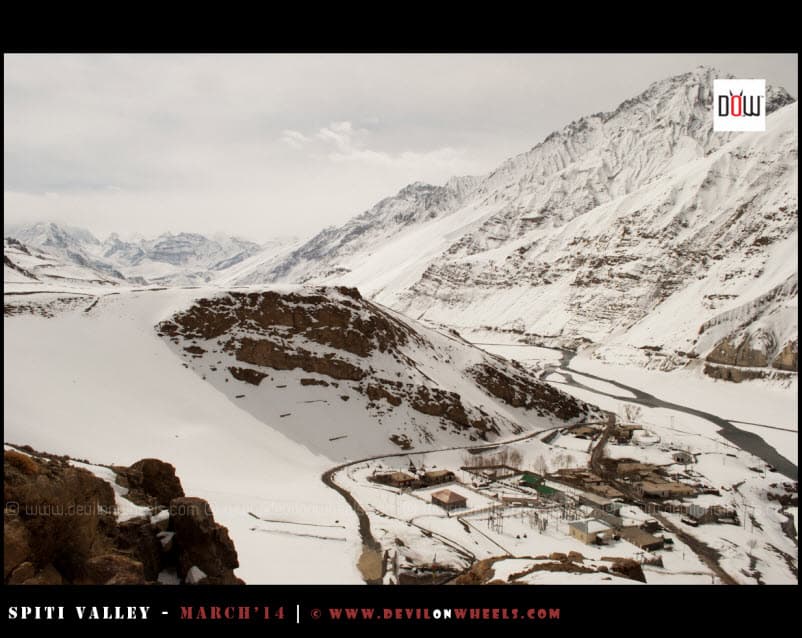 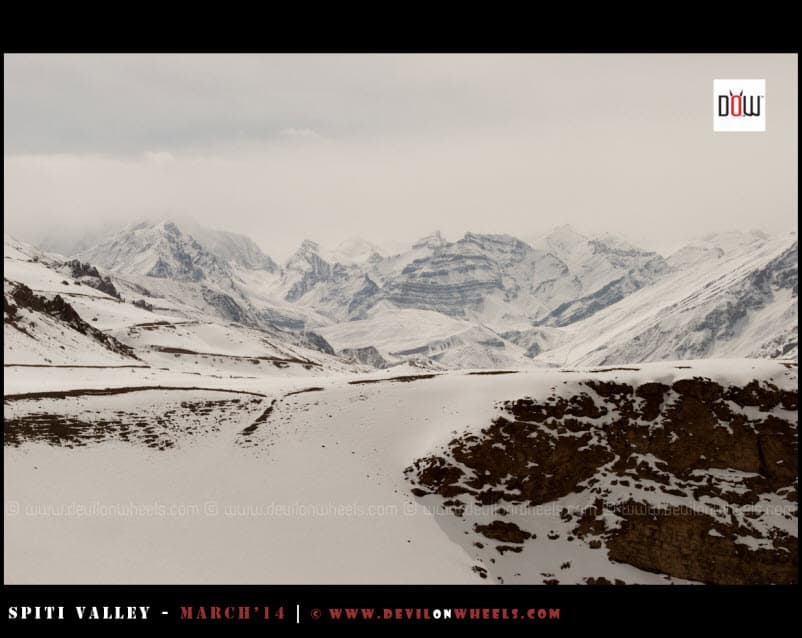 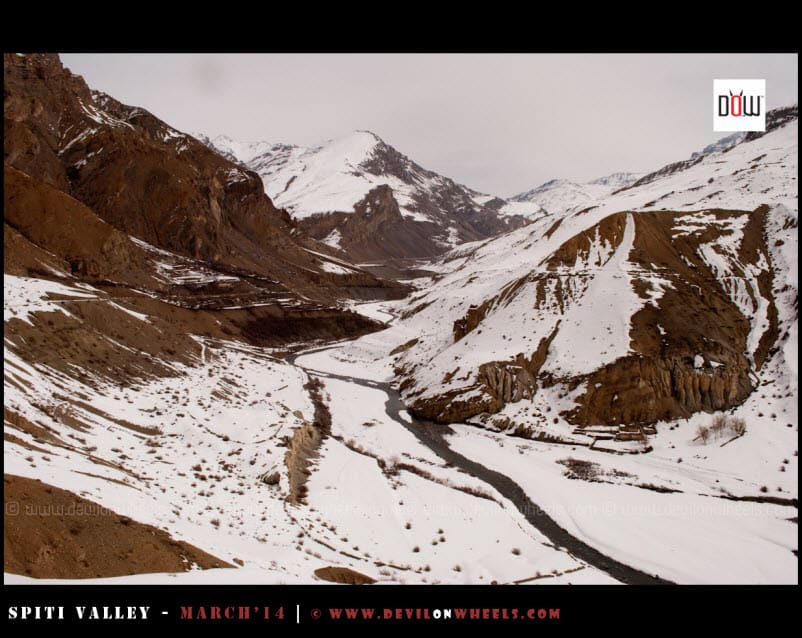 That is our drive

The drive was beautiful midst snow all around and on road which did made tough for Dorje but he managed it very well and his skills made it look ridiculously easy… At Rama Village, we met a local of Lhalung who was going back to monastery/temple with some stuff of it. Soon we reached Lhalung and the local guy asked to help us out in executing the DoW Causes as the primary school was next to his house that time of the year. He and Dorje, both helped us gather children of the village and we ran out of supplies in the end 😀 😀 … You can read the detailed account at the link: DoW Cause | GYAAN 500 in action at Lalung, Spiti Valley 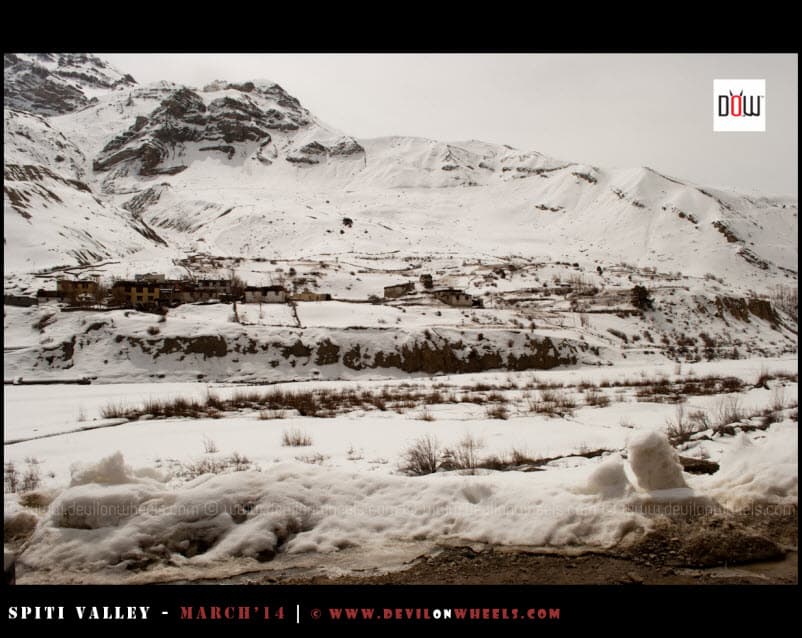 Road leading to Lhalung from Rama 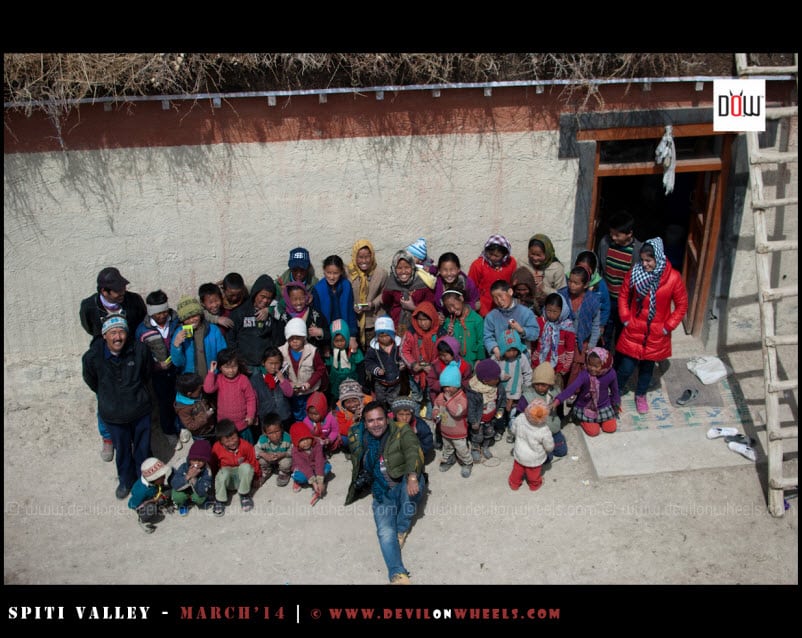 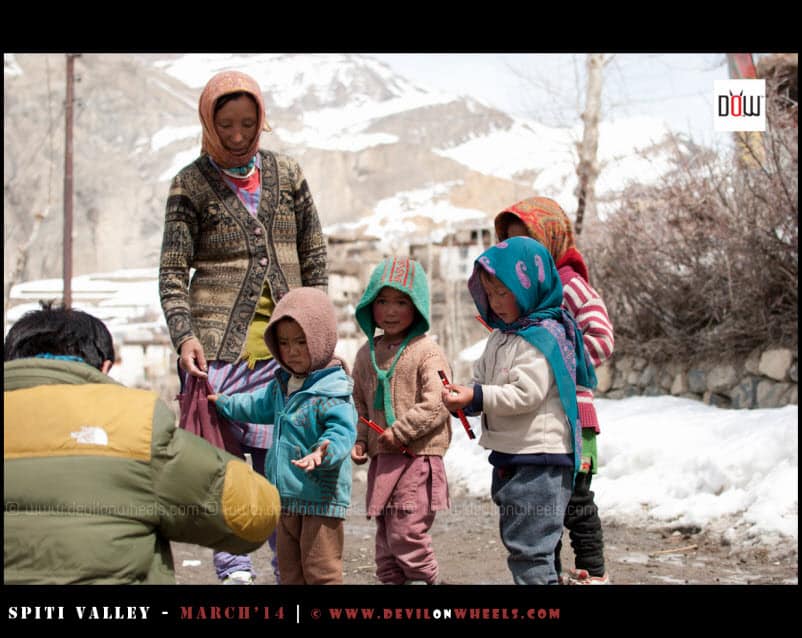 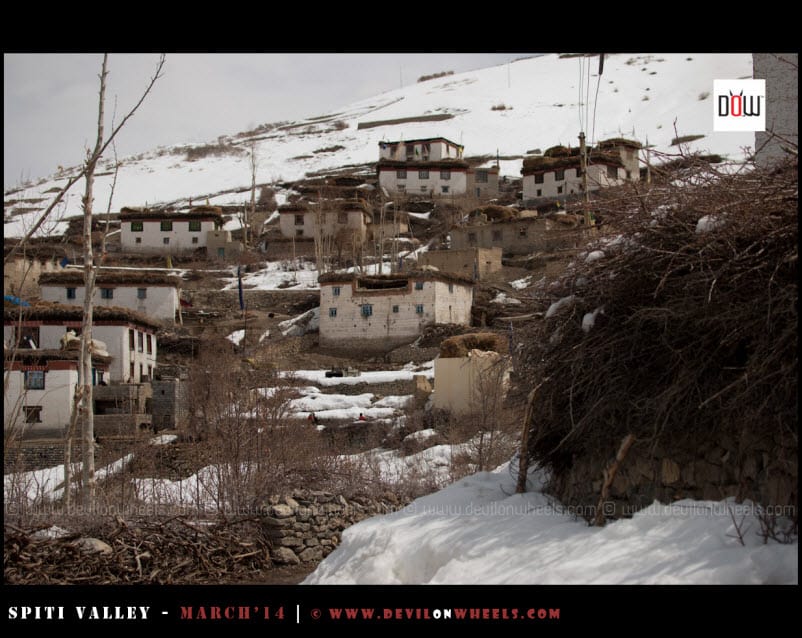 Then, the local insisted us to visit his house and have tea with him which we could not deny. (I later found out on my recent trip to Spiti Valley in September that it was the house of Rakesh ji, who is the pradhan of the village and the guy was his brother as Rakesh ji told me when I narrated him my story from this day. I was so overwhelmed to have food in this house on this mega meet in September again). As usual, the house was so warm and their hearts to welcome us were even more warm. We had chats, the guy was staying with his wife and little kids, one of them was infant only. He explained how tough the life is up there at Lhalung, raw Spiti Village experience can be sought out here as they lack many basic amenities too. Most village houses has dry pits only and there isn’t any wet washroom. He explained how winters are meant for survival and summers meant for the preparation of survival. It was quite an experience having conversations with them and enjoying every second of their hospitality. I was considering lucky myself, may be to have so much and still we people back here in civilized world, crib so much about…

Then, he accompanied us as we visited the Lhalung Monastery / Temple, where we had to trek from the entrance of the village all the way to the top 😯 … But, I was much better today in trekking and Sany bhai was usually the lead for us 😀 … The monk ji up there opened the temple for us and explained a lot about its history and allowed us some pictures without flash. We were delighted and had extremely wonderful time up there but it was time to start the drive towards Dhangkar Monastery as we had spent a lot of time up there… Mean while you can enjoy the remaining pictures…

That’s Dorje and in the background, the person who hosted us for warm tea 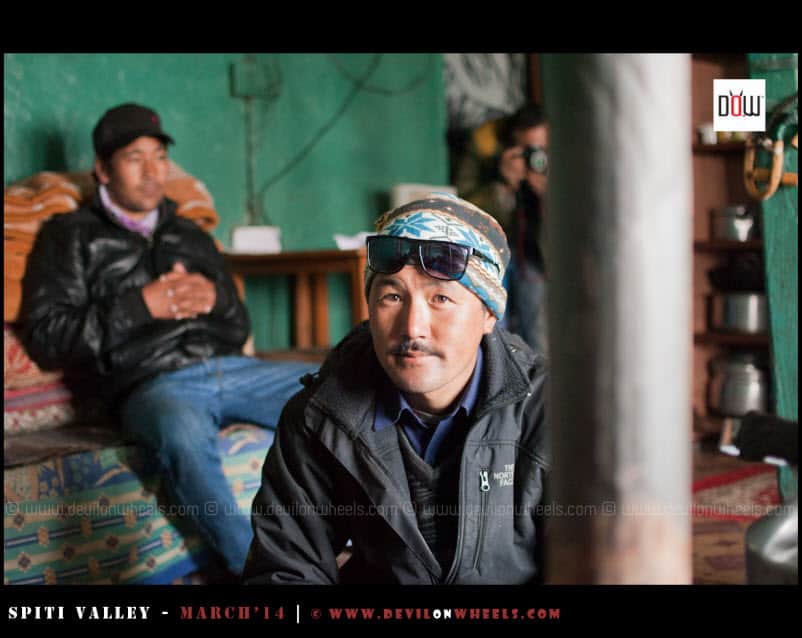 Kids at his house 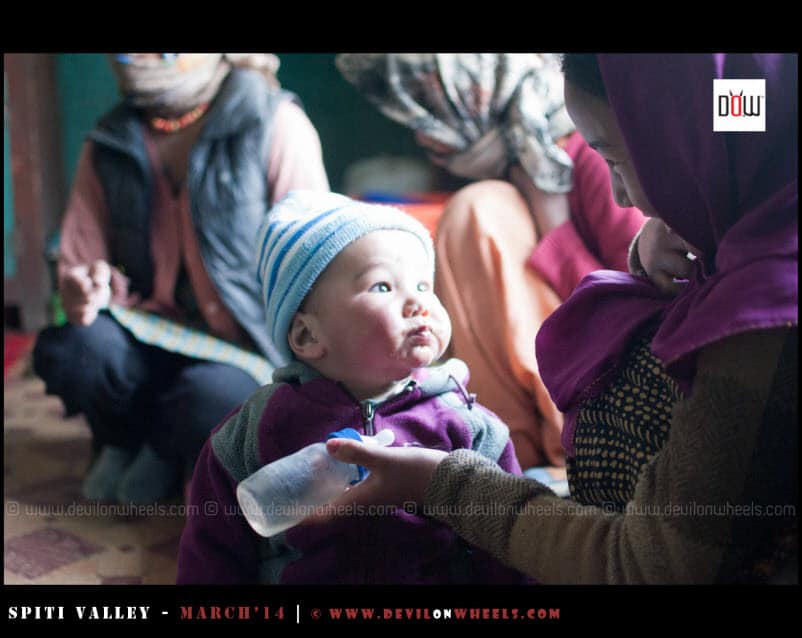 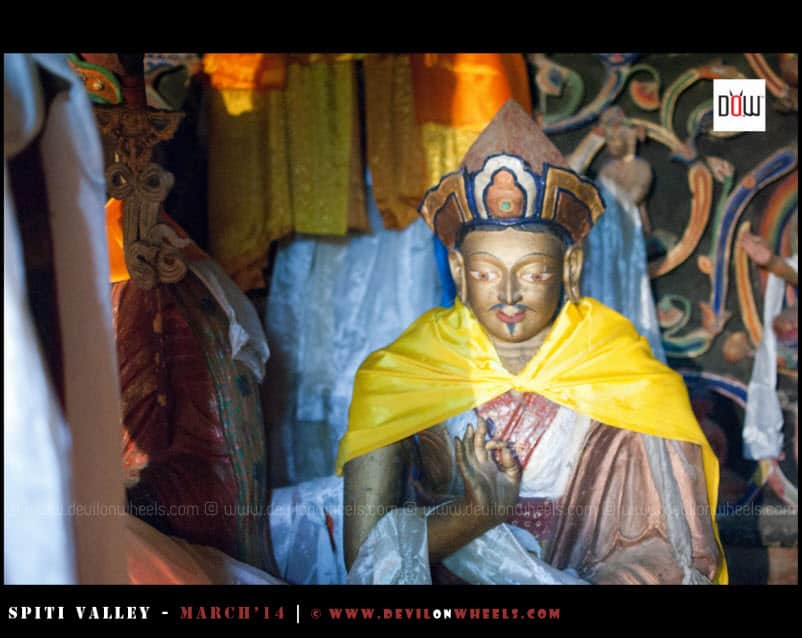 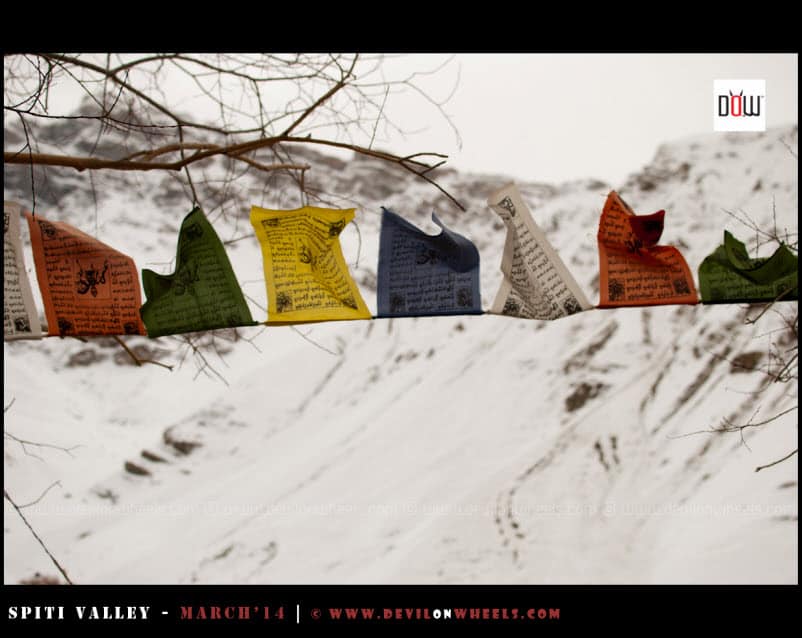 Demul is up there on the top of mountain in background Another view of Rama Village Road was not that easy 😉 I hope you liked this part of the Snow White Spiti Valley Travel Tale. Stay tuned for the next part coming up very soon “Freezing Dhangkar Monastery” 🙂 🙂

Have you ever been to Lhalung Village or Lhalung Monastery? Or are you planning a drive to Spiti Valley over it sometime soon and have any queries? Do share, in either comments section below or in Itinerary Advice Forum of DoW Community with all other devils 🙂 🙂