Getting an experience of Spiti Valley while driving over NH-22 or Hindustan – Tibet Highway is always an enchanting experience in one’s life. However, I had this long dream of living a Frozen Snow White Spiti Valley experience which was not materializing, until came March 2014. We were making some rough plans in our group and one of the thoughts was let’s do the adventure of Spiti Valley in March when it is completely filled with snow and whiteness all around as snow galore there… A kind of an experience in its own sense !! 🙂 🙂

The Road to Spiti Valley | NH-22 or Hindustan – Tibet Highway I never imagined the plan would come true seeing the hardships and harshness of terrain along with the treacherous drive over NH-22 and Hindustan – Tibet Highway. Firstly, driving through the deadly roads of Kinnaur Valley where the risk further heightens during March – April with all the snow melting, taking down glaciers in the form of landslides and all… Secondly, the freezing cold conditions and all the basic facilities deprived including the running water & washrooms. What started with a decent sized group, one by one, everyone started to back out and just a night before leaving even a friend Neeraj backed out 🙁 :(… I gave the news of Neeraj backing out due to some critical office work to Sany and he said we will surely go and he will take his Duster as only a High GC vehicle had a chance to make it there to Spiti Valley during this time of the year. So, all who remains were just 3 adventure souls, me and the other newly wed couple viz. Sany and Shikha in Sany’s duster. BTW, I had already shared the summary of this trip in the article: White Spiti Valley in March – Itinerary, Road Conditions & Updates

We started as usually at 5 AM in the morning from Delhi with me having little nerves inside of how this freezing cold experience of Spiti Valley would going to be like. We sailed smoothly over NH-1 passing Panipat, Karnal, Ambala. Just before Ambala, police guys stopped us and we were challaned of Rs 400 for over-speeding, 104 it was 😯 😯 … Good or Bad Omen??? Only time will tell :)… After all this drama, Sany controlled the speed and we arrived at Sany’s brother place at Panchkulla where he had some quick work. Bhaiya treated us with a yummy breakfast which I still remember for taste :), so Sany if you are reading please pass on my regards to Bhaiya again as you know me being introvert could not clearly explain the feelings then and there 😉 … We spent about couple of hours and resumed the drive on to Hindustan – Tibet Highway or say NH-22. Are they different?? Really, you think so?? Well, there is a difference between NH-22 and Hindustan – Tibet Highway as both are not aligned together and are not same but have overlap sections. You can read about their differences in detail in my previous article: Hindustan – Tibet Road or Road to Spiti Valley | An Introduction

Around 11.30 AM, we resumed the drive on Himalayan Expressway, paid the toll and off towards Shimla It was the story of same old drive on these roads and surprisingly the traffic wasn’t that much. Sany bhai got opportunistic and was running the duster in full motion along the curved roads 🙂 … We crossed Shimla in no time but as we approached Kufri, the weather turned upside down and snowflakes started to pour down at places and snow started to appear alongside the road 😀 :D… Jubilant, we were to see the snow on first day itself 😉 … Downhill it was raining, we stopped at some places and took some pictures. Ahead of Fagu, we finally took a quick stop to eat some snacks along with Tea after Panchkulla, yes we skipped the lunch 😉 😉 … Often, it is some girl or kid only who make me stop on long drives in Himalayas but this time Shikha was like us only and hence, we were running continuously, munching whatever little we had with us as wafers, chocolates and biscuits… 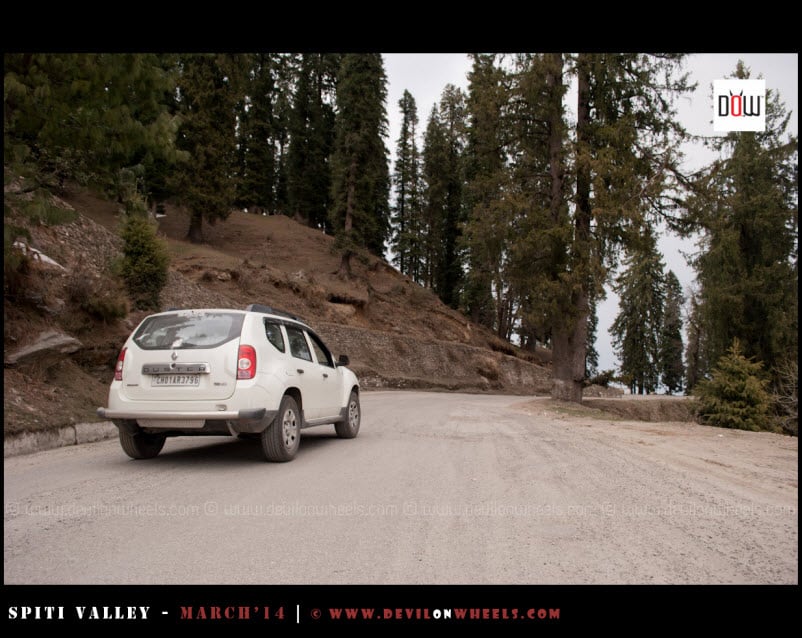 The Dark Clouds over NH-22 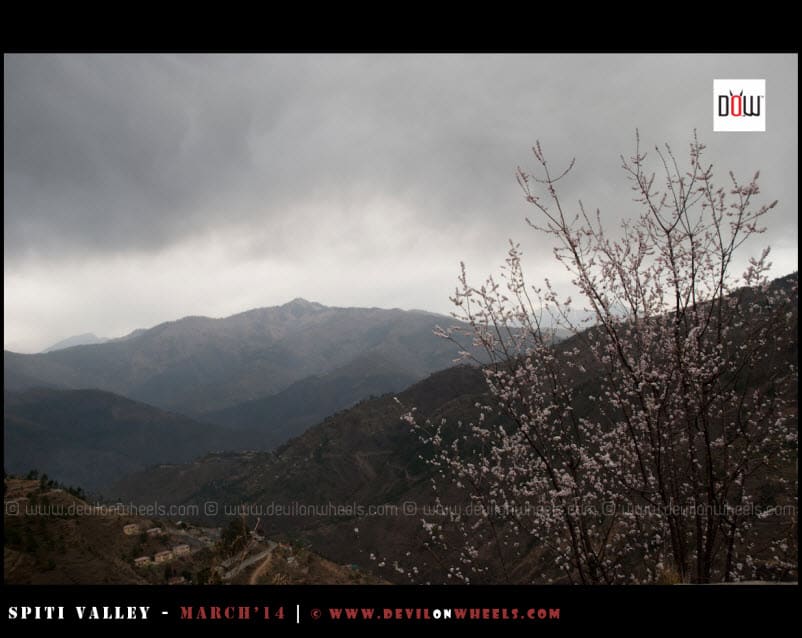 Weather was really nice and cool 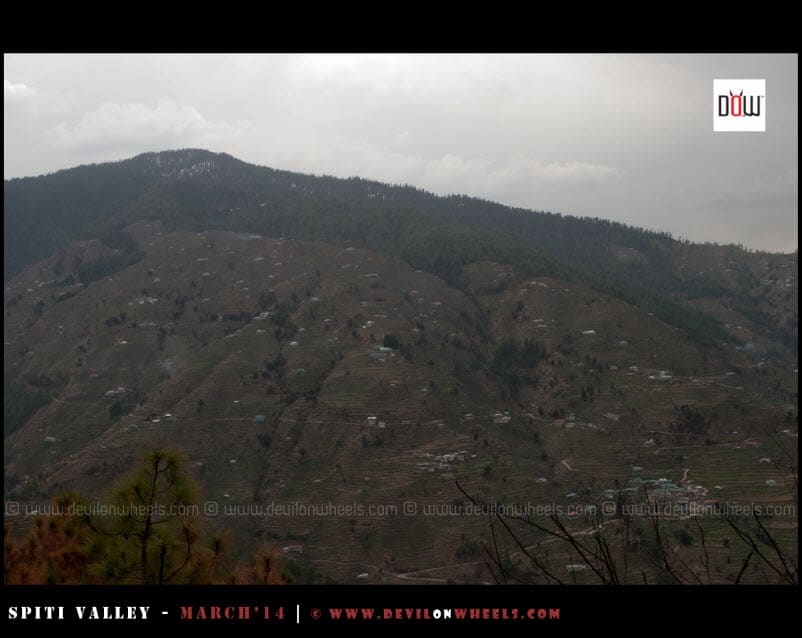 By this time with overcast conditions and dark clouds hovering up, I had taken out my fleece as it was quite cool but Sany as usual was in half sleeves no matter how cold it gets 😉 … We continued the drive towards Narkanda which had much more snow alongside the road, took some pictures and descended quickly to Rampur We stopped aside the freshly laid road as it was looking amazingly beautiful with no traffic, long view, Sutluj river flowing aside us and overcast conditions with pleasant climate around… You cannot ask more refreshment than it in a Day as you escape from a busy, fast paced life of Delhi or corporate…

The remains of snow at Narkanda 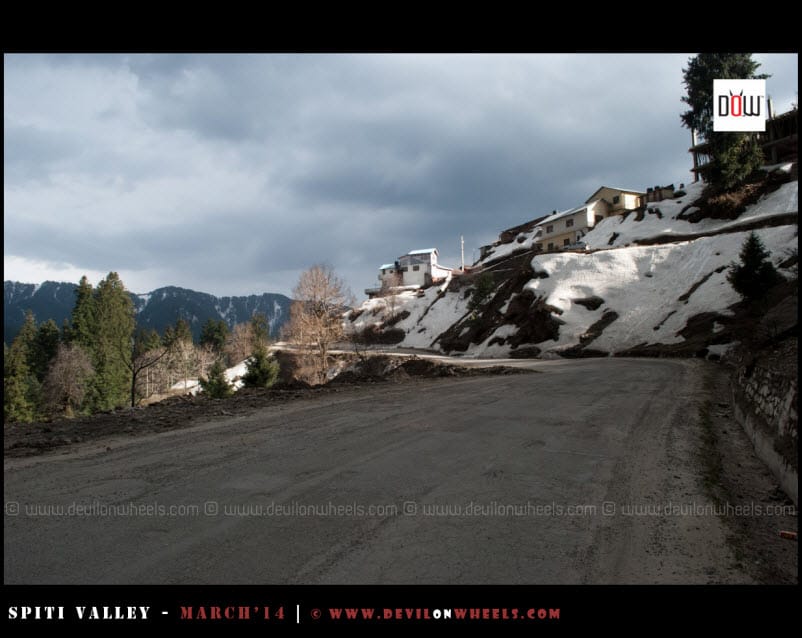 And the Sutluj flows besides NH-22 near Rampur 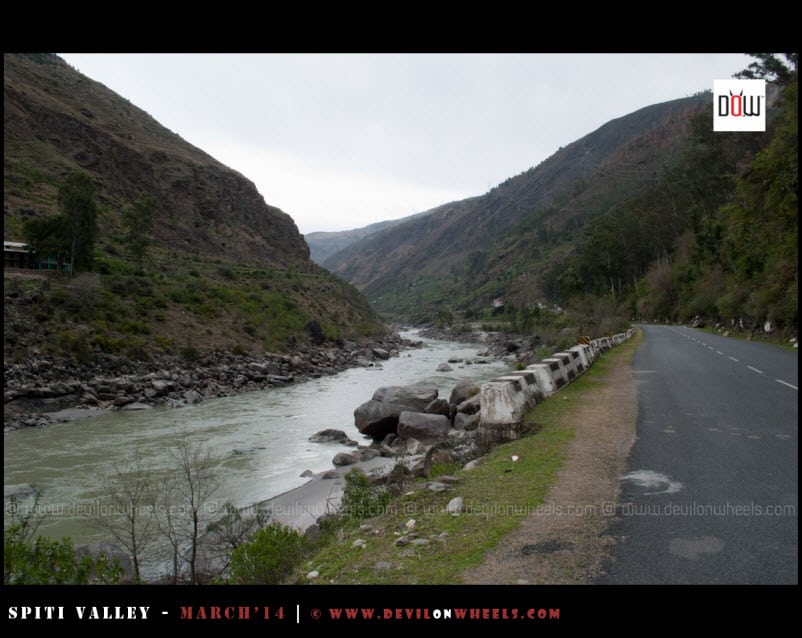 Roads near Rampur on NH-22 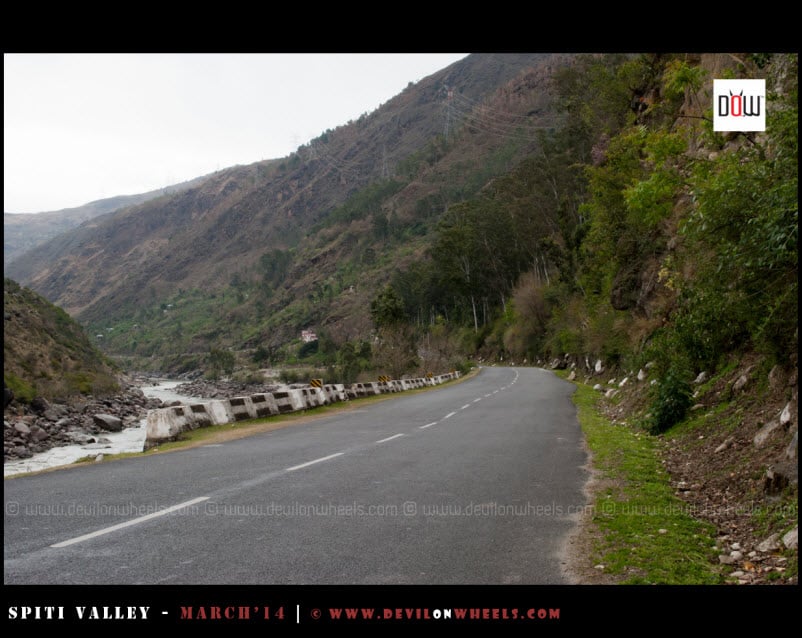 Sany and Shikha with their Ride of this frozen journey 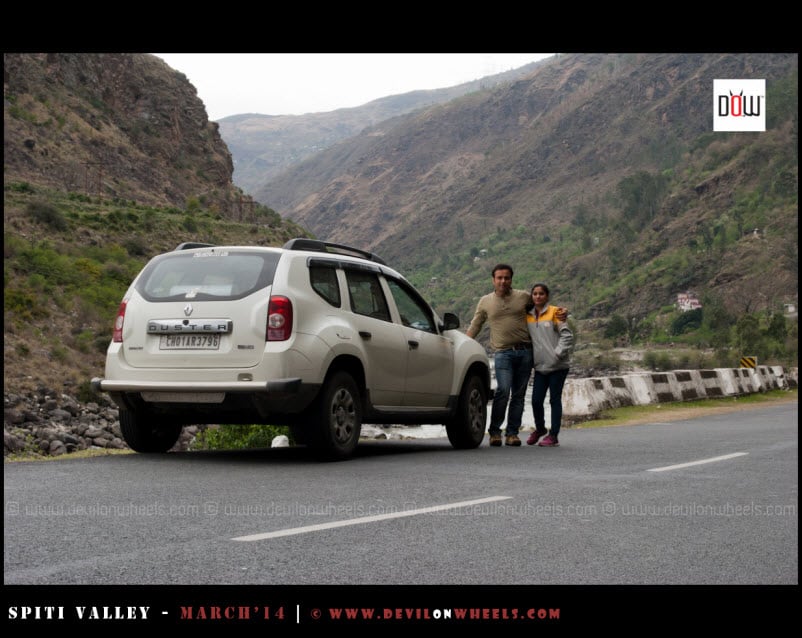 Horses grazing around on NH-22 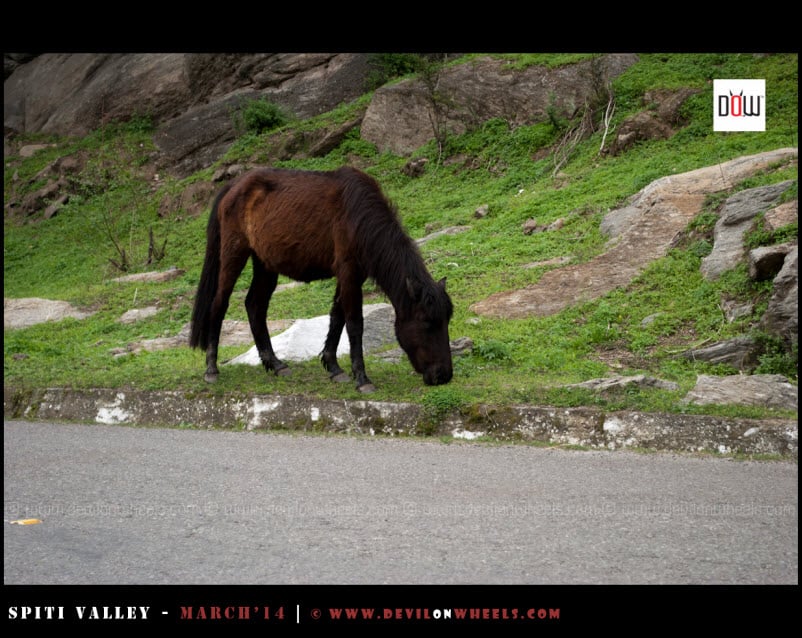 It was evening and we were thinking where to stop only to realize that we will not be able to make it to Sangla now, so better we stay at Sarahan or Jeori only. By the time we reached Jeori, it was getting dark and since we had to leave early in the morning too, so we decided to put up in Jeori only and not go further up to Sarahan which was just about 14 KMs ahead. There is a PWD Guest House at Jeori, so went in and inquired from the caretaker, Pritam ji, about the rooms availability. He told us that couple of rooms are booked and there are two rooms available in one of which washroom was not functional 🙁 🙁 … We said fine, no worries and took the spacious rooms on the first floor and requested him to arrange for dinner as we were quite hungry. PWD Guest Houses in Himachal are open for normal tourists, offer good stay and prove quite economic too as the slabs of prices have been defined for Himachali Tourist, Non-Himachali, GOVT. Employees, etc.. If you need, you can book it by following the procedure listed in the article: How to Book Himachal PWD Rest Houses or FRHs … You can also call up Pritam Ji at 09816629377 if you are visiting Jeori or Kinnaur region to request a favour in case you are badly stuck without any stay option. He is the in-charge of most PWD Guest Houses in Kinnaur as he told us, so can be of some help. 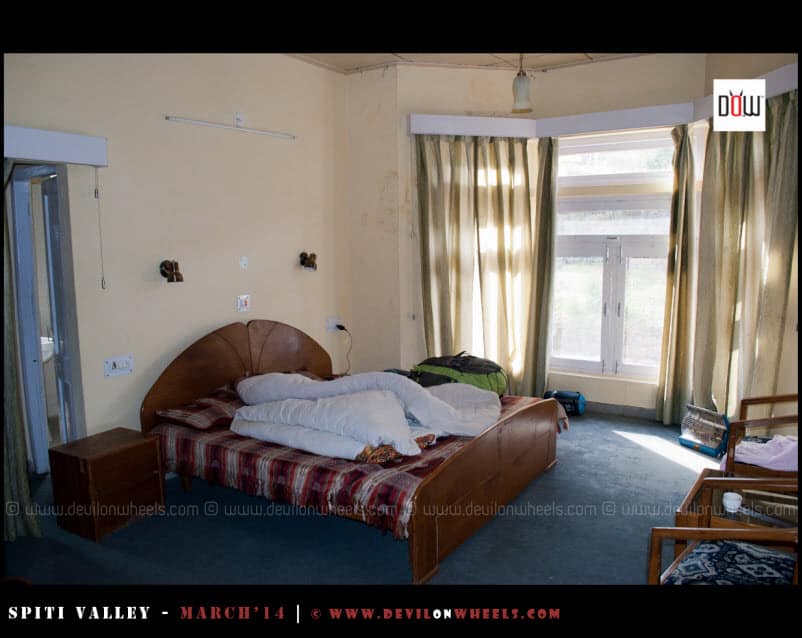 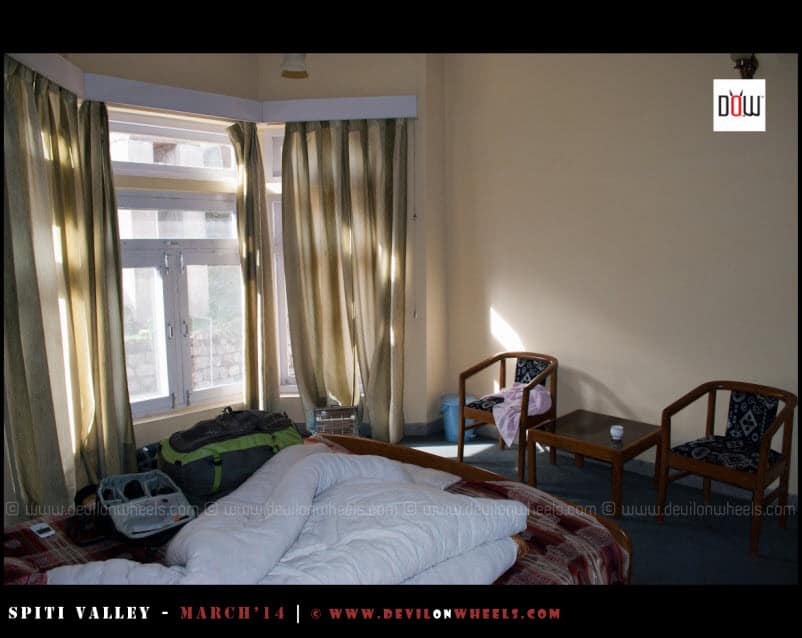 Jeori was quite warm in the evening but as the night fell, things got cooler and pleasant. Pritam ji told us about the very bad conditions of the roads ahead and said after 5 days the road to Kaza has been just opened a day before but still quite bad in condition. However, listening to his words that road is open, we felt glad 😉 … Food was served in the dining hall and frankly speaking I had to gulp the Dal and Rice just with water to fill something into the tummy. There wasn’t any salt or any taste in it, so better you either cook yourself OR you better take your own food. I was missing the ketchup or Maggie Masala which adds a bit flavour to the bland taste, sometimes. Anyways, tummy was filled to some extent and we decided to retire for this long day we had… I called up my wife and family, told my whereabouts and slept for the night.

I hope you liked this part of the Snow White Spiti Travel Tale.

Have you ever been to NH-22 or Hindustan – Tibet Highway or are you planning a drive to Spiti Valley over it sometime soon and have any queries? Do share you experiences or queries in either comments section below or in Itinerary Advice Forum of DoW Community with all other devils 🙂 🙂