It was another cold night in Barot but this day we had an extra quilt with us that helped us fight it. We had to reach Chindi today and we wanted to go slow considering Junior might need sufficient breaks to control his motion sickness. So, we started early in the day and left Barot at 8 AM without breakfast 😀 … We had ample of things to eat and also planned to stop by some local road side dhabha so decided to skip it. You can read the complete review of our stay at Barot in the article in DoW Community: River View Homestay at Barot 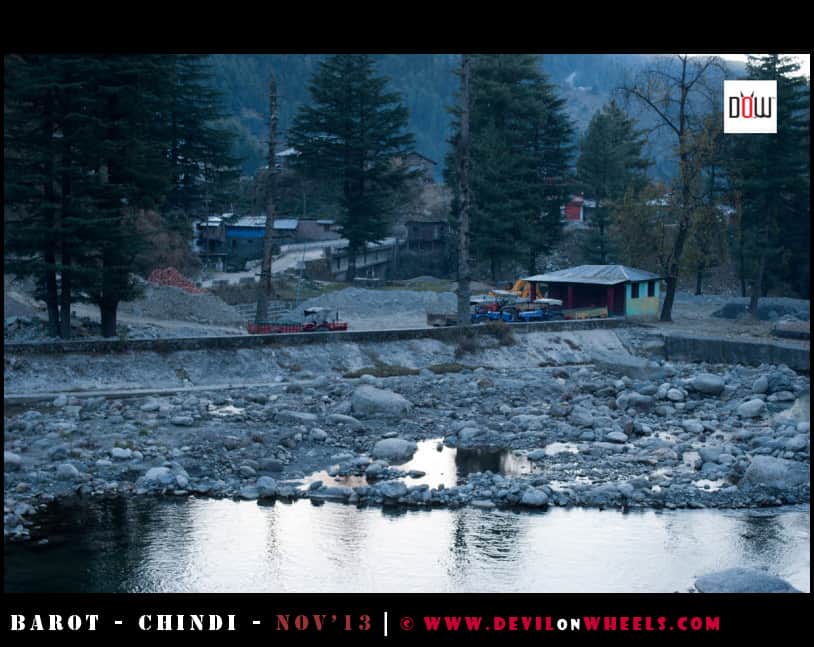 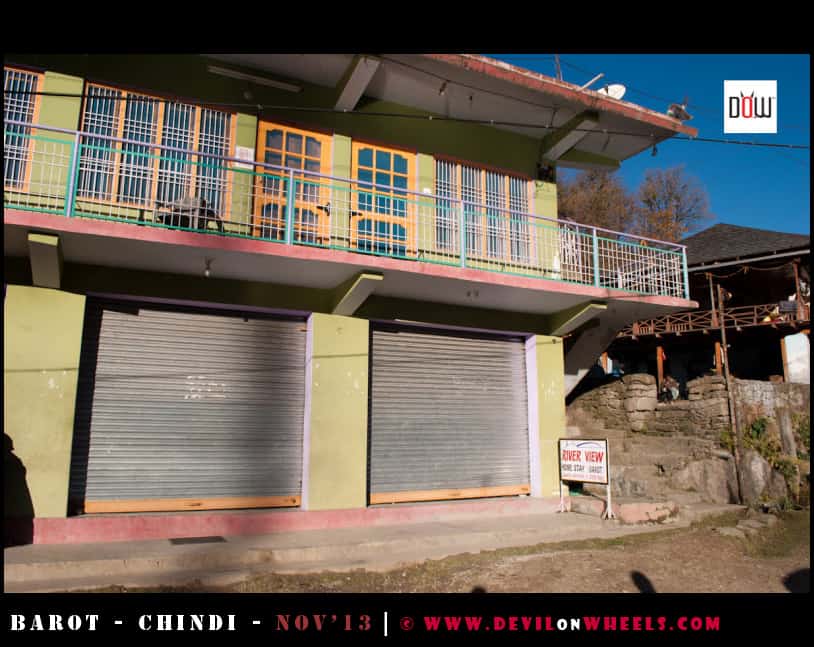 The 25 KMs drive in day time from Barot towards Tikkan – Jhatingri – Ghatasani looked lovely and quite peaceful. However, you need to beware of blind curves as being local roads, they are narrow and the pick-ups/campers usually drive very fast over there without blowing any horns on curves. So, you better be safe than egoistic 😉 … The mist in the mountains looked fabulous and the hilltop views from Jhatingri was worth stopping by and being oozed upon. We parked aside and on the right stood snow capped views and below a valley filled with floating mist, definitely a morning treat to eyes… A Misty view of valley down as seen from Jhatingiri 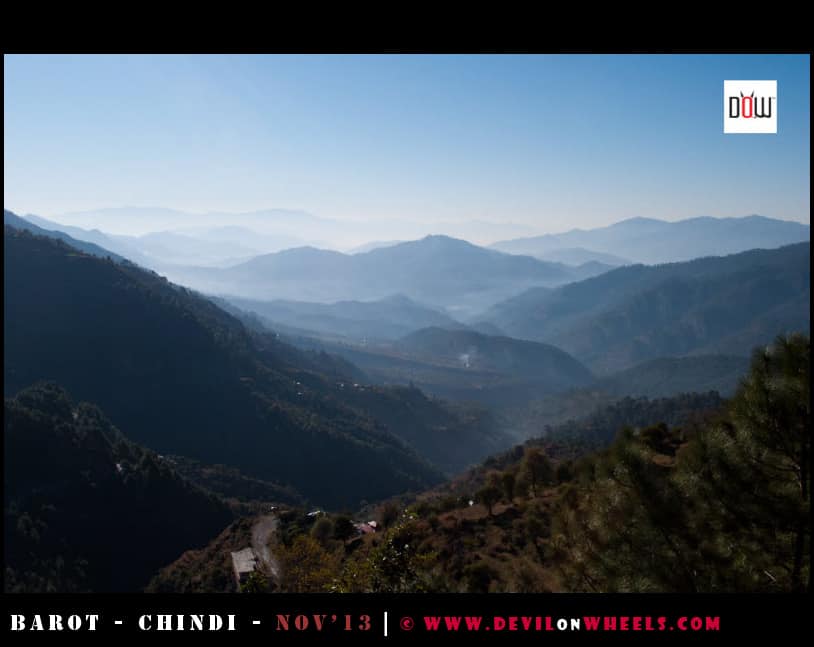 More views as seen near Ghatasani We descended to Ghatasani and the drive again took about same time but then we cruised on Mandi – Pathankot Highway hoping to have some breakfast at Ner Chowk or Chail Chowk ahead of Mandi. Junior was enjoying till now but half way to Mandi started crying again due to stomach ache and we knew that he was still facing issues with motion sickness. Mind you I was driving slow on this day as we had ample of time to reach Chindi. I refrained myself not over shooting 30 KMPH especially on curves which is usually the reason for motion sickness. Unfortunately, he was still suffering and now we started to feel sad too, finally he threw out as we reached Ner Chowk 😥 😥 … Me and my wife were a bit sad seeing all this but now we did not have any choice but to reach Chindi may be more slowly and steadily… In between sadness, I missed the left cut to Chail Chowk from Ner Chowk but then after about 5 KMs further ahead and just before Sundernagar there is another left turn that goes to Rohanda through Jaidevi So, we took that route in order to reach Chindi. Meanwhile my wife made Junior slept and I kept driving for next 4 Hrs in order to reach Chindi which is about 46 KMs from Rohanda and 168 KMs from Barot. The whole drive which is through the thick jungles and small hamlets with valley views below, was quite beautiful and very very peaceful apart from the noise of suspension from my car 😉 … In 2.5 Hrs we reached Rohanda where there are couple of treks that goes and you can even do Kamrunag Lake trek from there. There is a picture of Lord Hanuman on a big rock at Rohanda which I missed to click :(… The views were lovely throughout and if you are seriously looking for a secluded drive it is worth the effort spent.

The views as seen on the way to Chindi Family relaxing on the way to Chindi 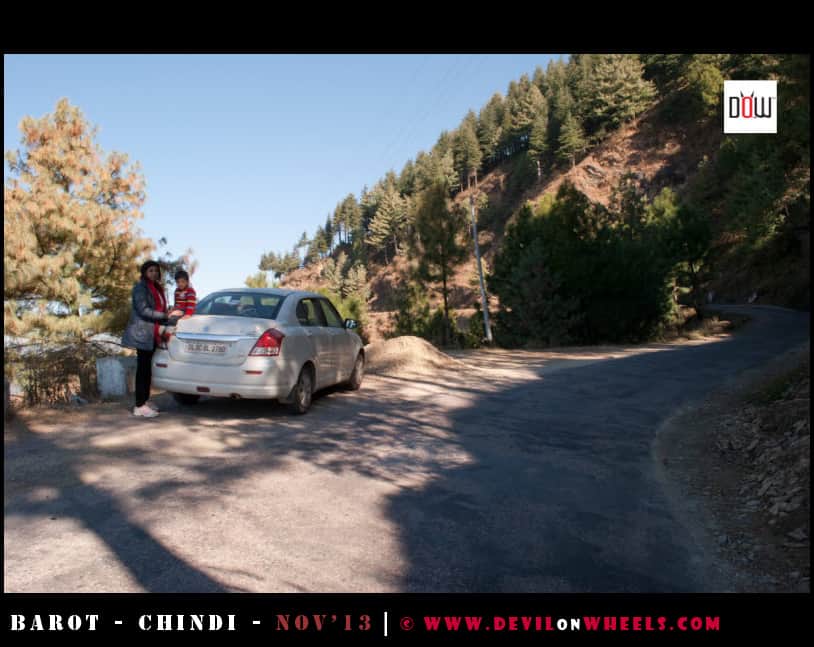 All set for the final leg to Chindi from Rohanda 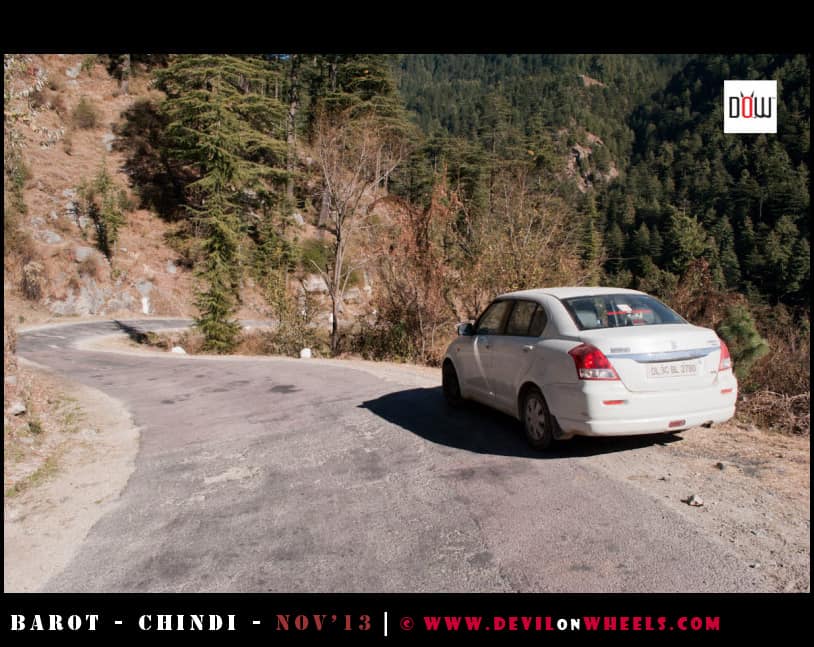 Roads leading to Chindi from Rohanda 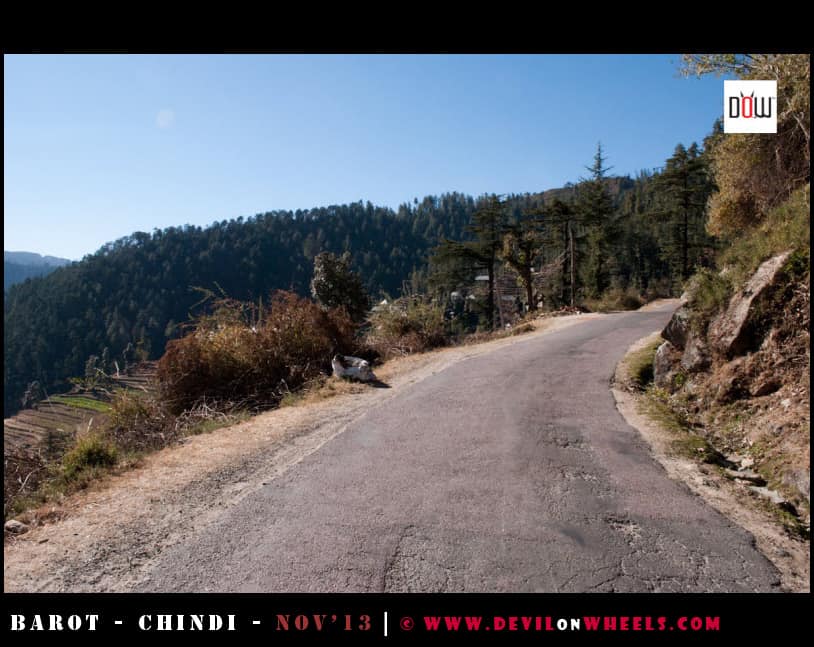 We reached a Y-Fork where the straight went to Karsog and the right U-Turn going to Tattapani – Naldhera Chindi was just 6 KMs from there but was not mentioned anywhere and assuming that Chindi to be closer to Karsog I took the straight road only to find later from a local villager that I should have taken the main road to Shimla via Tattapani – Naldhera. However, a villager told that there will be another road that will come ahead which will lead us to Chindi from where it is just 2 KMs only. Karsog was still 22 KMs and the whole wrong turn did cost us 9 KMs more of a journey… Junior woke up in between and as we kept stopping here and there so he remained fine after morning nausea. However, we were quite hungry by the time we reached it was 2.30 and we immediately checked in to HPTDC Hotel Mamleshwar at Chindi in a semi deluxe room costing Rs 1100 (after winter discount Rs 770) which was quite decent for us. The hotel is situated right on the main road itself leading you to or from Naldhera – Tattapani – Mashorba, just hidden behind woods. You can read the complete review of our stay at Chindi in the article in DoW Community: HPTDC The Mamleshwar, Chindi. 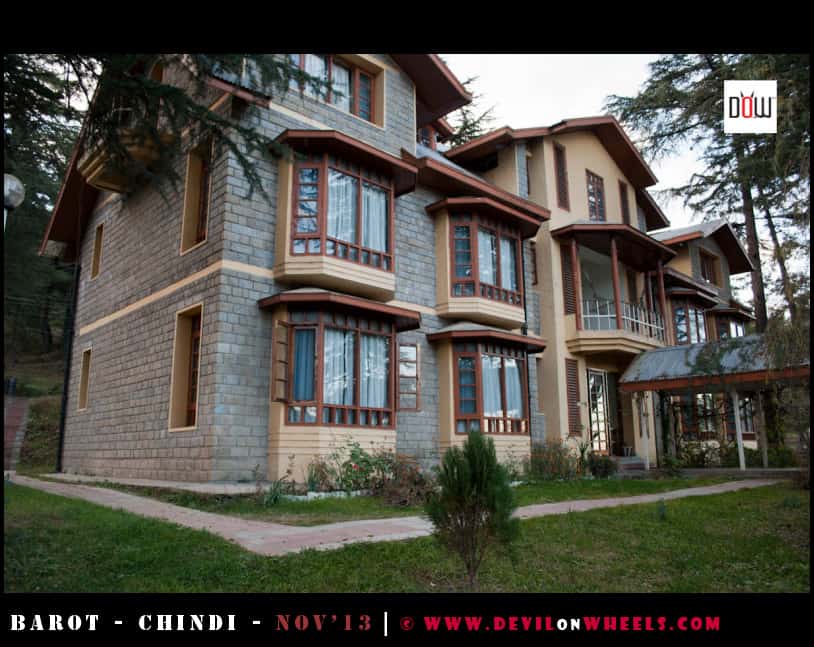 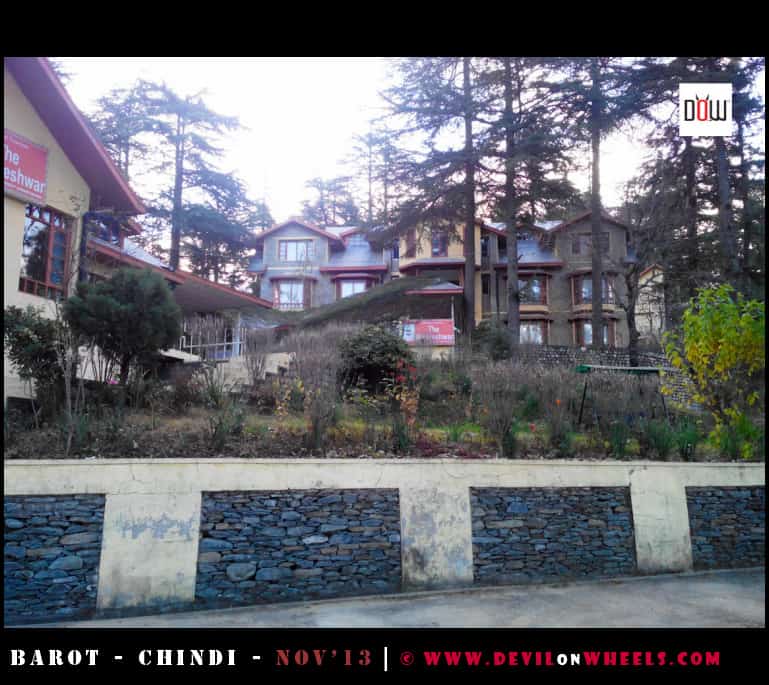 A little Background on Chindi

Chindi is located in Karsog Valley of Himachal Pradesh. It is about 94 KMs from Shimla and 467 KMs from Delhi via Shimla – Mashorba – Naldhera – Tattapani route (SH-13). The place is surrounded with loads of apple orchards, with wood of pine & deodars around. There are many temples that is in vicinity of Chindi and can be check out like Shikari Devi, Mahunag, Palinag, a sacred Bheem Rock, etc.. Picture below will provide the entire list of sight seeing places around Chindi. If you are looking out for a peaceful long weekend vacation near Delhi, Chindi is a place worth trying out. 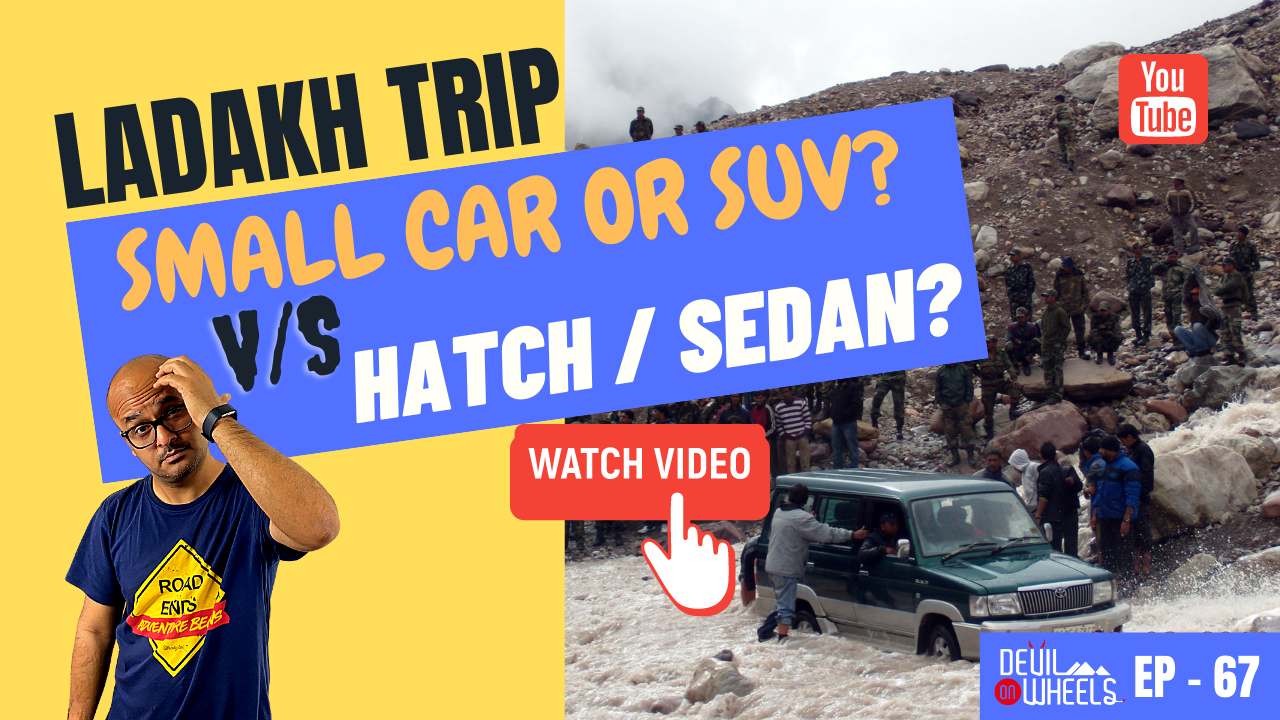 At Chindi, the calmness surrounding you is something that cannot be compared enough. The solitude you get with the numerous walks around in the woods and orchards (though not laden as the season is July – August) behind the hotel is good enough to rejuvenate your body and soul in Himalayas. Chindi also gets snowfall in the month of January and February, so if you are planning to look out a new place to find snow near Delhi, you can surely hit the road to Chindi in that case. The thick forests and apple orchards filled with calmness is the USP of Chind. So, the best time to visit Chindi is July – August when apple orchards are fully loaded.

Now coming back to the story, the lunch was served in no time as we stretched our bodies after the long drive and especially the Junior who got a room like a play ground to run around when compared to the cage he had been put into. The food as expected was average as per the standards of the HPTDC, quite eatable enough and fresh anyhow. Though taste wise they are similar all over in Himachal 🙂 … We were hungry so the taste was on least priority for us as the lunch just came and just got finished :D… Then we relaxed a bit which was followed by walks around the hotel, in the complex, Junior played with a ball in the lawn and finally a walk towards the village till the time of sunset which had lovely golden colors falling behind the misty mountains in front of us. The flying foxes and monkeys are very common sight here. You can spot Flying foxes even in the Hotel Mamleshwar and you can hear strange sounds around as the dusk light falls down. I spotted one too as one lived just on the tree in the hotel itself but since it was quite dark could not click any picture 🙁 🙁 … However, when I asked what that strange animal is, the caretaker told me it is flying fox and quite common up here.

Junior Relaxing in the Garden of Hotel Mamleshwar, Chindi A Golden Sunset at Chindi, Himachal Well, it was quite a nice day for us apart from that one hour where we felt bad taking the Junior with us. In the night we opted for French fries and soups only as wanted to stay light over stomach. Both were fine to taste and finally after playing with Junior for next couple of hours we retired the day for a good night sleep. 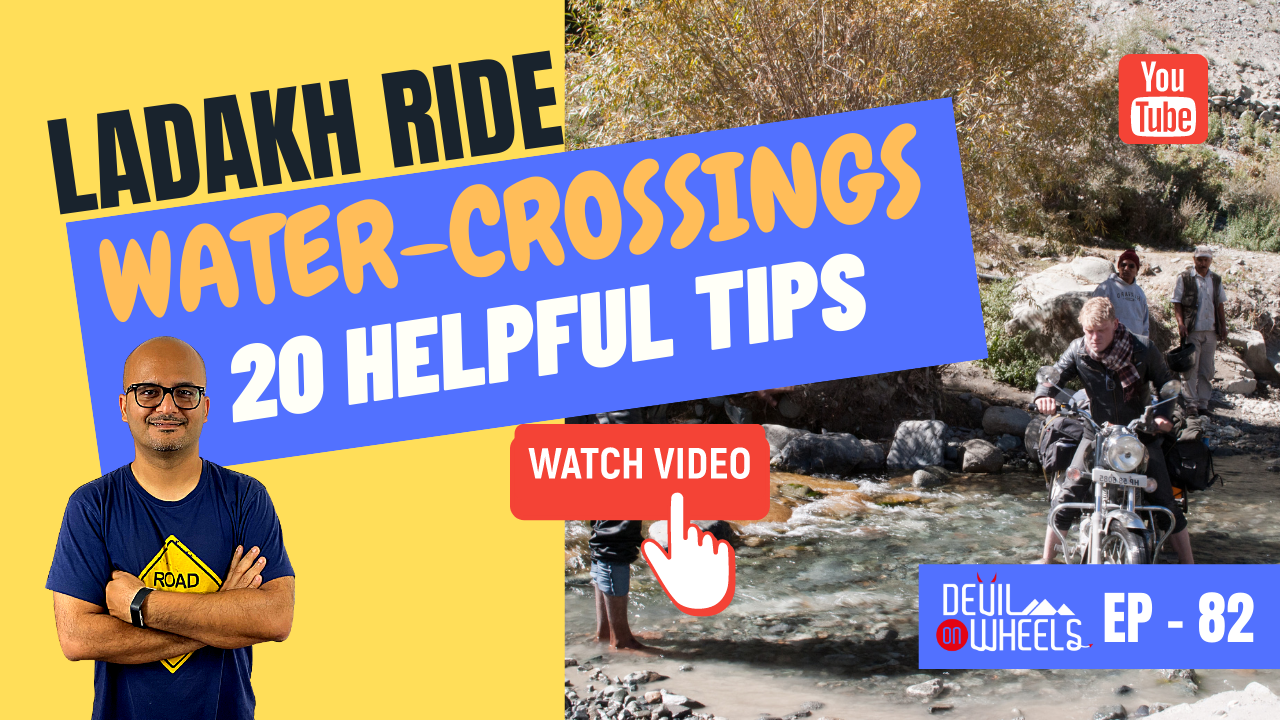 Stay tuned for the next update…